On The Horse Thief & Never Mine Ry.

I've added a new engine to the roster of my On18 Horse Thief & Never Mine Ry., No. 5, the H.D. Ryman - named for one of my all time favorite Disney artists, Herb Ryman. In this week's video, I show how I scratchbuilt the engine, and get into some of the particulars of On18. Allow me to expand on things a little more below. 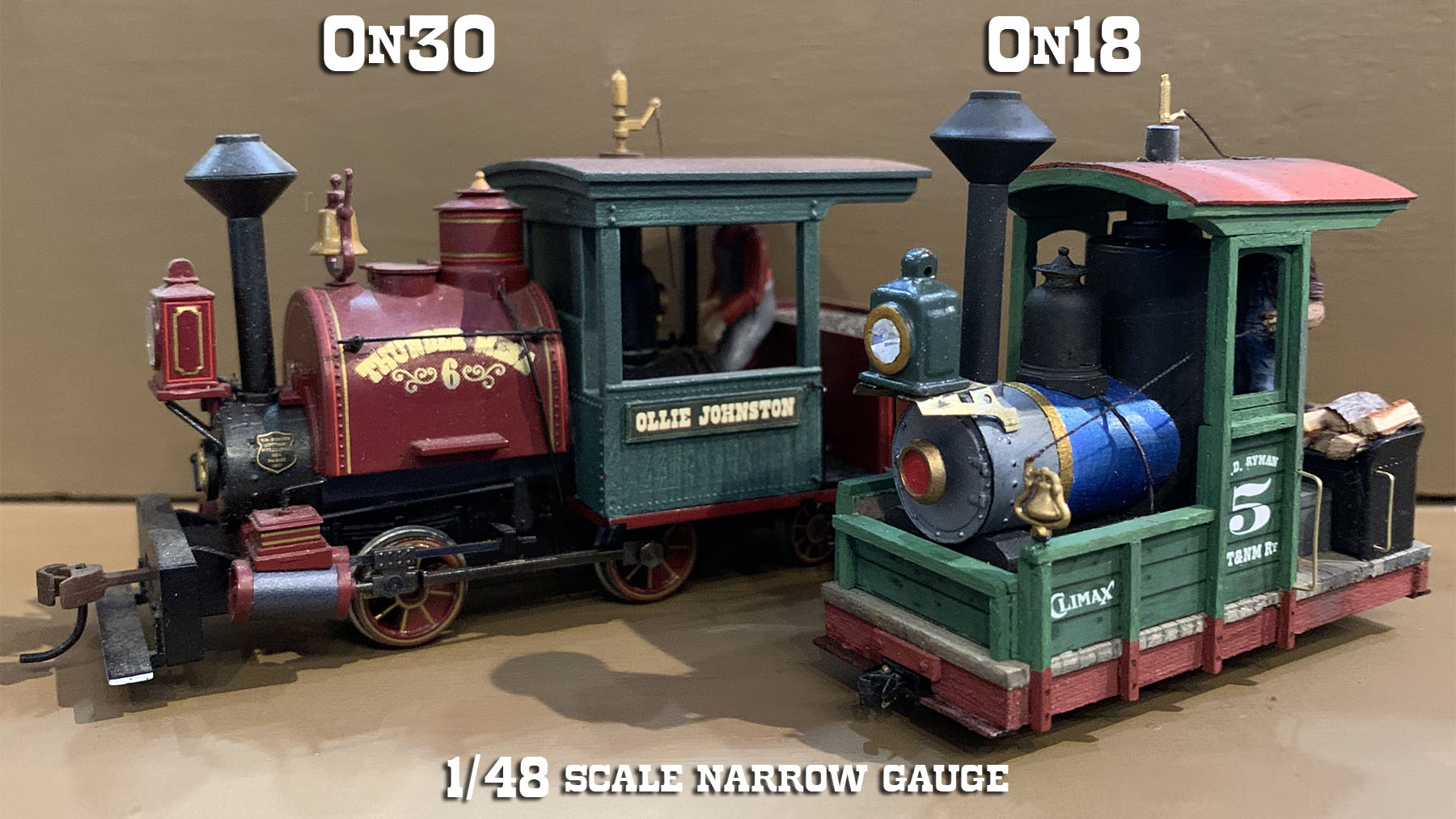 A Primer on On18 and Scale vs Gauge

If you are already familiar with On18, this information will not be new to you, but since it is a relatively obscure scale/gauge combination, here's a brief explainer of what it's all about for the uninitiated.

The "O" in On18 stands for O scale, which in America is understood to mean 1:48, or 1/4" = 1'. The "n" stands for narrow gauge, meaning a distance between the rails narrower than the American standard gauge of 4' 8.5". The "18" refers to a track gauge of 18". Unfortunately, the terms "scale" and "gauge" are often confused or conflated by the layman but they actually mean very different things. In the simplest terms, "scale" refers to the size of a model relative to the real thing, while "gauge" is a railroad specific term that refers to the distance between parallel rails on a track. In other words, if you say, for example, that a model is N gauge, what you are really indicating is only that it runs on 9 mm gauge track. Whereas if you say it is N scale, you are specifically stating that the model is 1:160th the size of the real thing.

The Thunder Mesa Mining Company model railroad is built in On30. Using the formula above, this translates to O scale trains running on 30" narrow gauge rails. Its wholly owned subsidiary, the Horse Thief & Never Mine Ry is built in On18. Though still the same scale, that means the equipment is somewhat smaller because it runs on a narrower gauge track.

To model On18, we often use N scale mechanisms, wheels, etc. as a starting point. Using them in O scale means we are effectively changing their size relative to the real thing. Track is a good example of this. In N scale (1:160), 9 mm gauge track represents American standard gauge, 4' 8.5". The same 9 mm gauge track used in O scale (1:48) shrinks down to become 18" industrial narrow gauge.

This is the same formula used to model On30. HO gauge track scales out to very near 30" in O scale, and so HO scale mechanisms, wheels, etc., can be repurposed for On30.

To further confuse matters, there is HOn30, used by some modelers in HO scale (1:87) to represent 2', 3', or 30" narrow gauge. Just like N scale and On18, HOn30 also uses 9 mm gauge track and components, and fortunately for the On18 modeler, many of these can be repurposed for O scale. For example, the Horse Thief & Never Mine uses Peco HOn30 track to better model On18 track. The scaled up and wider distanced ties look better than standard N scale track would. 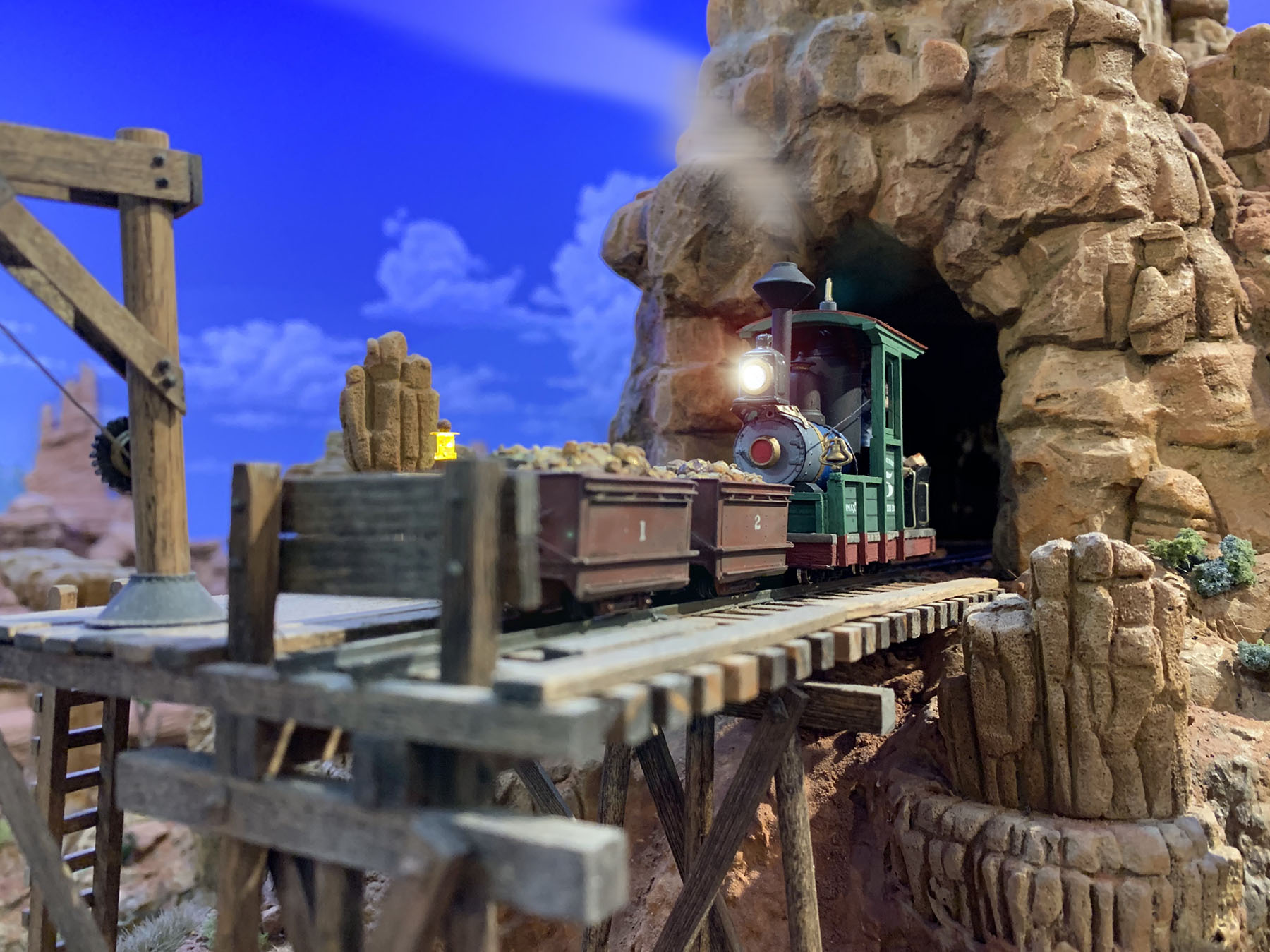 An On18 Baby Climax

To build my On18 "Baby Climax" locomotive, I started with a smooth running and reliable Kato 11-106 N scale 4-axle mechanism. Then it was a matter of designing and building a somewhat plausible model to fit over this mechanism. I used a lot of parts from my scrapbox, particularly from old HO scale locomotives that had given their all. I never throw anything away and will sometimes buy old junkers on ebay just to use for parts in projects like this. Things like bells, whistles, and headlights translate perfectly from HO to O18 because they should look like smaller versions than one would find on the usual O scale narrow gauge equipment.  I use Micro-Trains N scale couplers with draft boxes and trim off the trip pins since these trains wouldn't have air brakes. One thing I failed to mention in the video is the extra weight added to make the model run better. During assembly, I filled the boiler with lead BBs held in place with epoxy resin.

Below are some photos from the build and of the finished model. 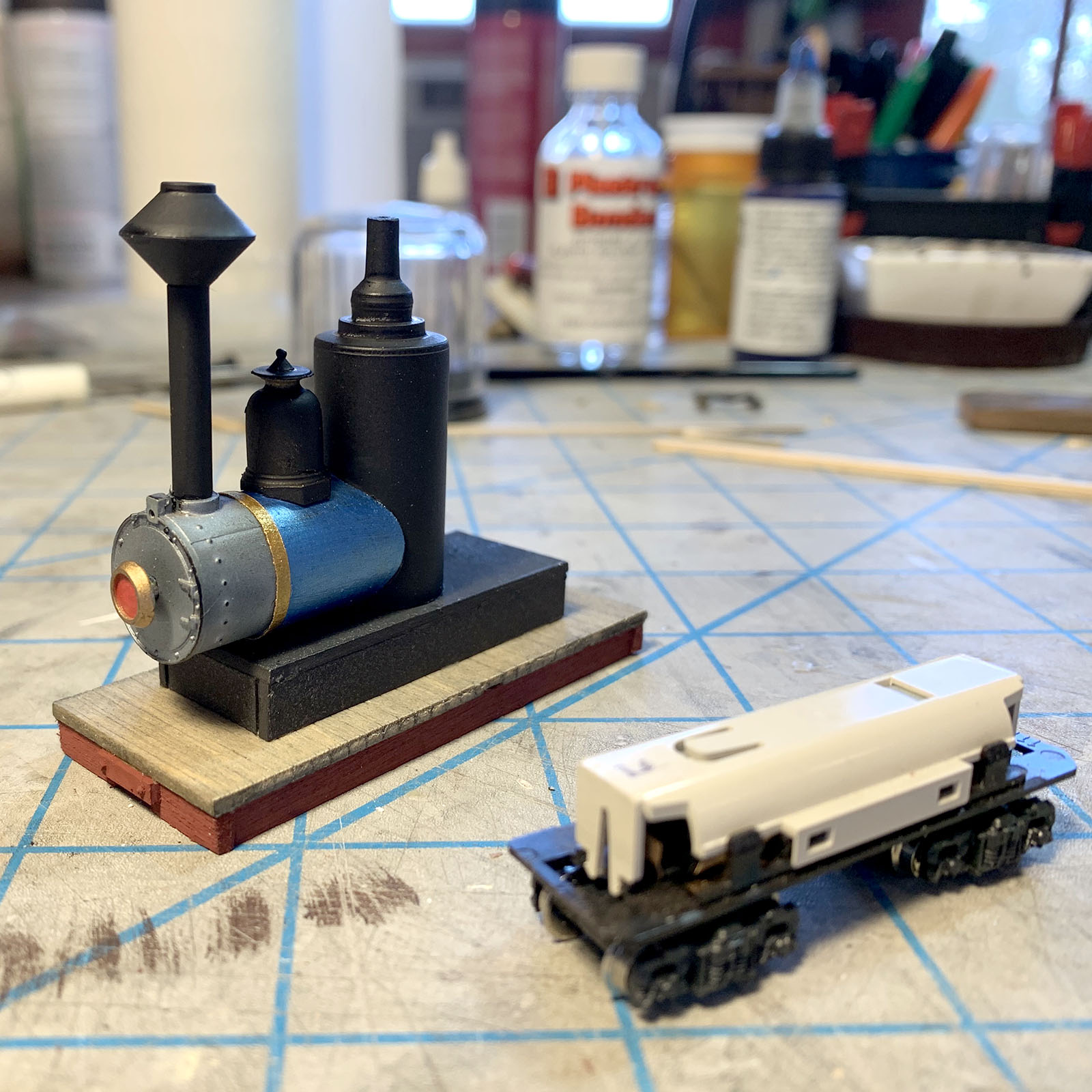 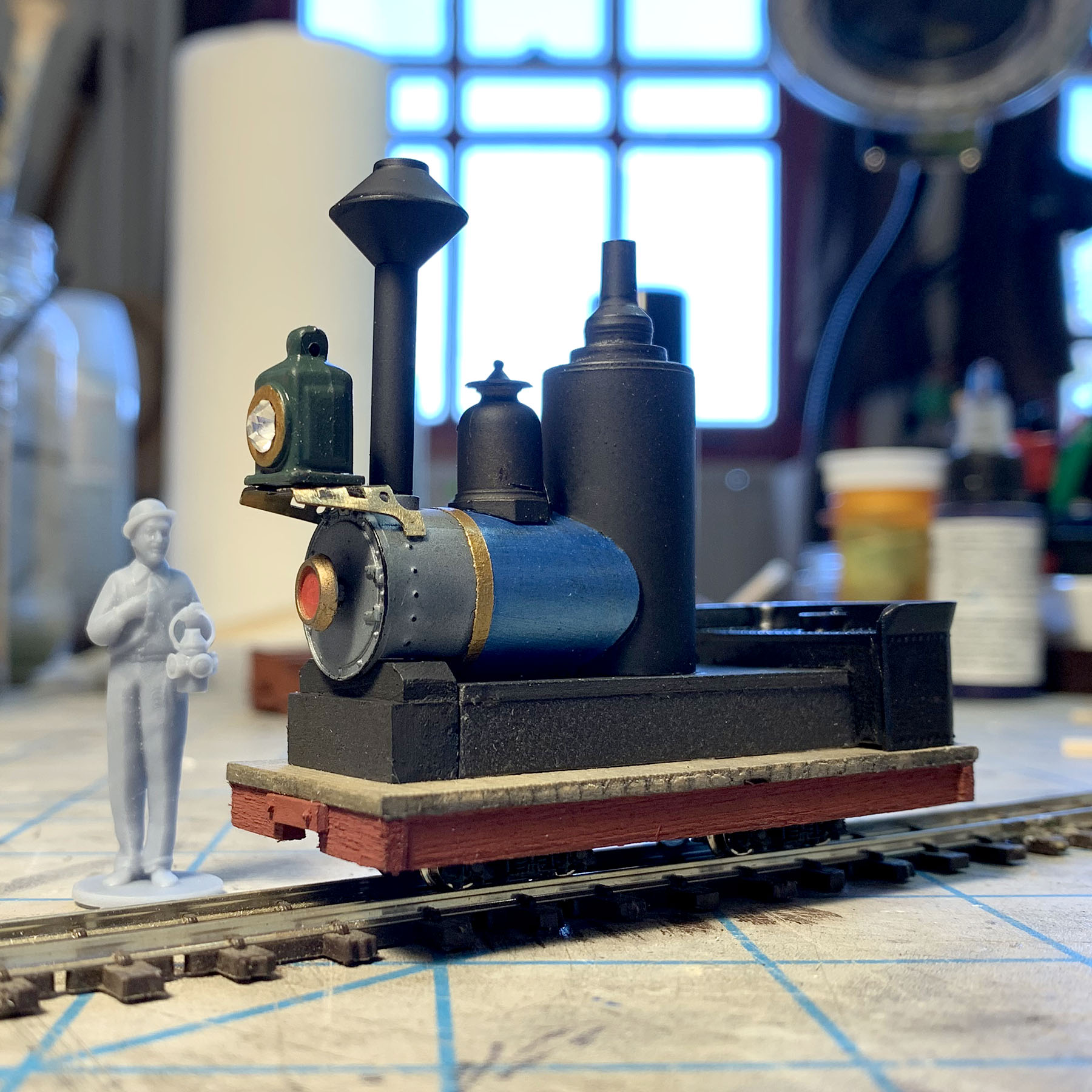 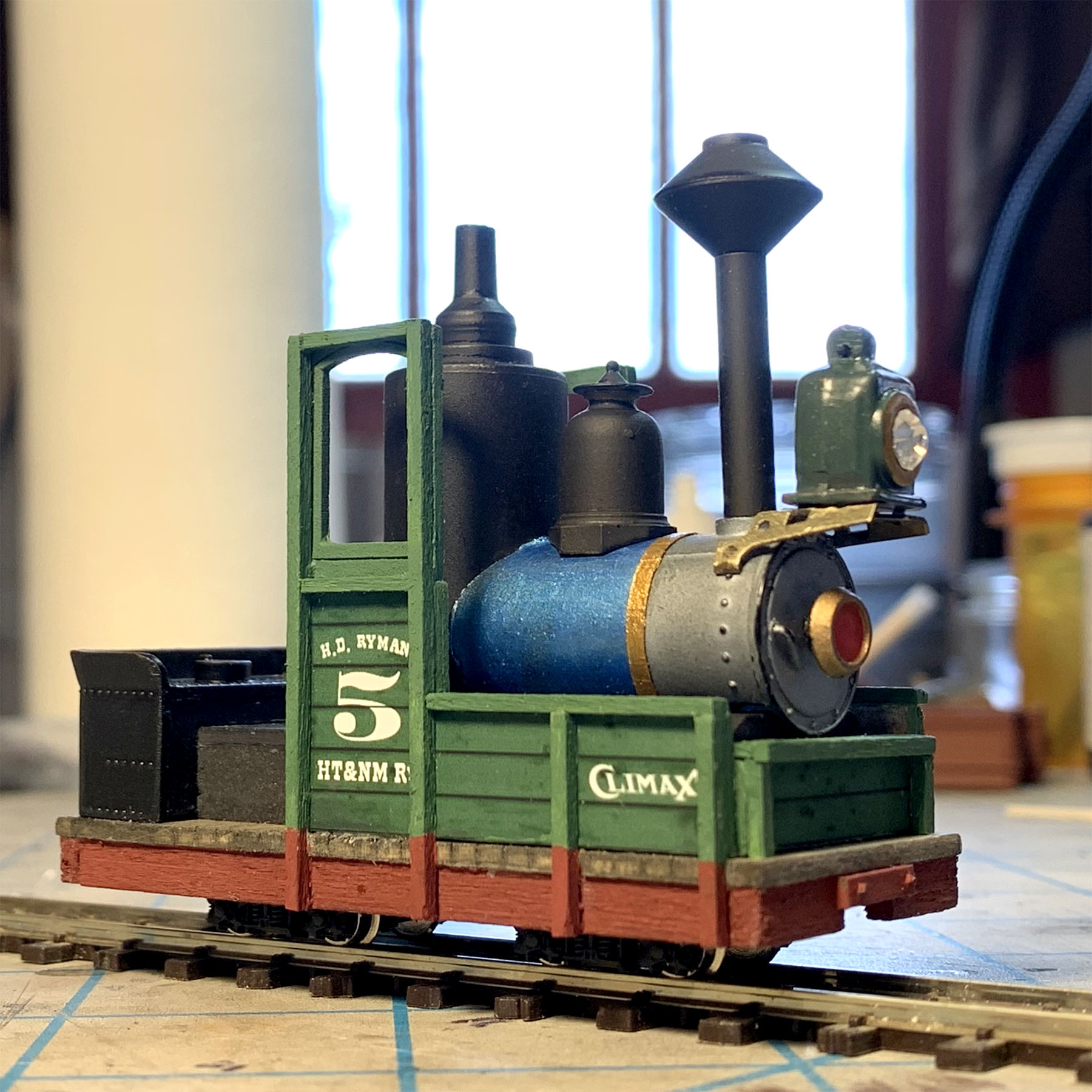 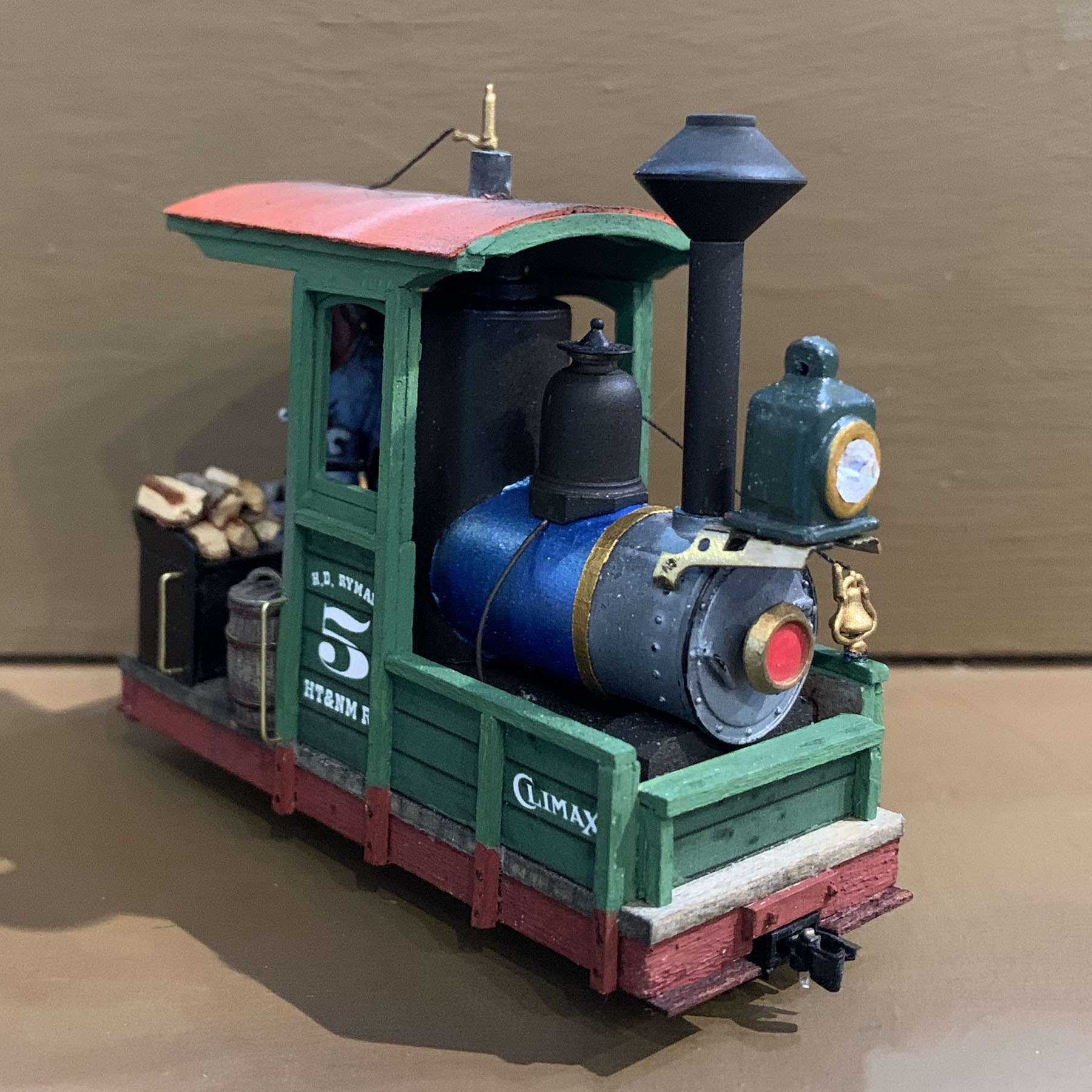 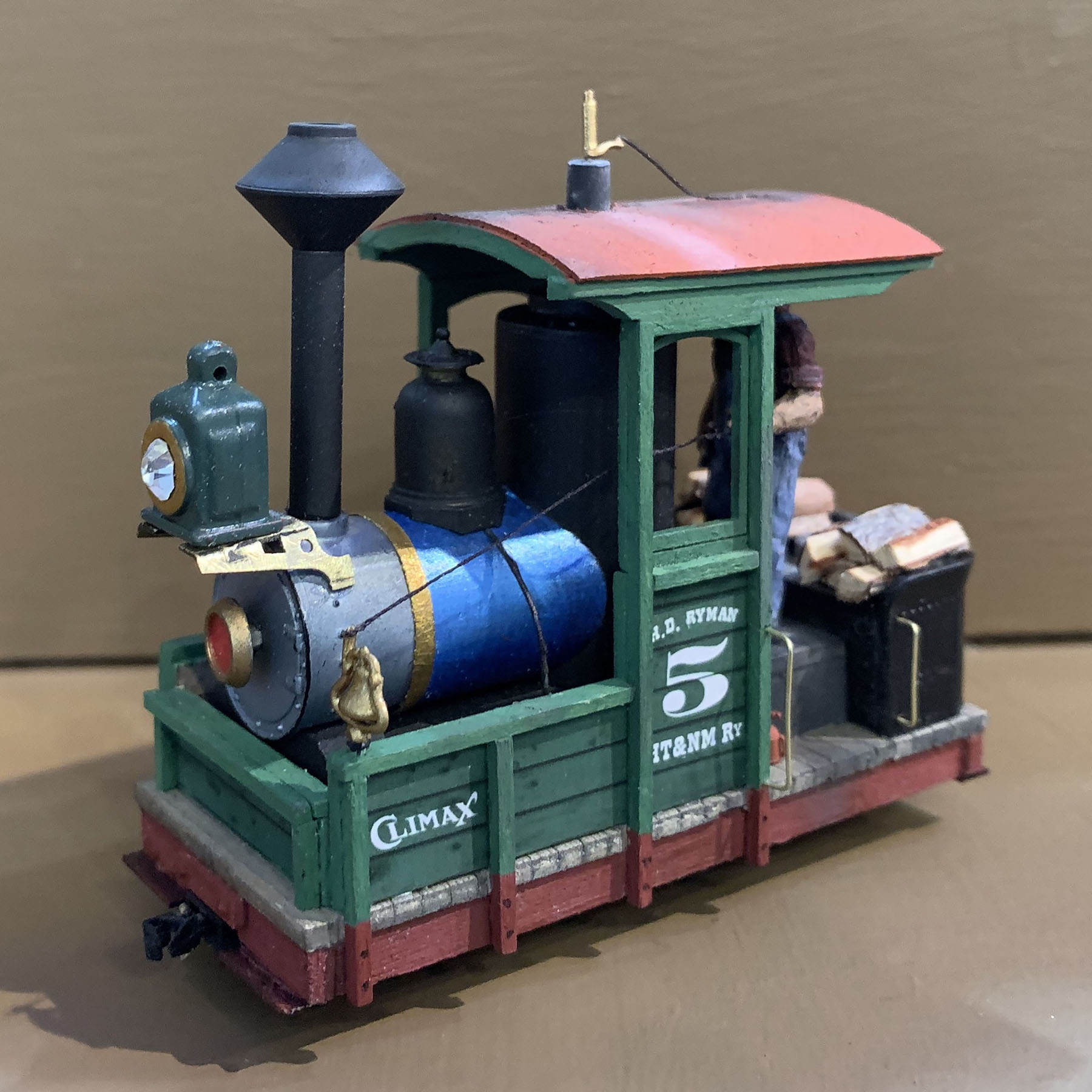 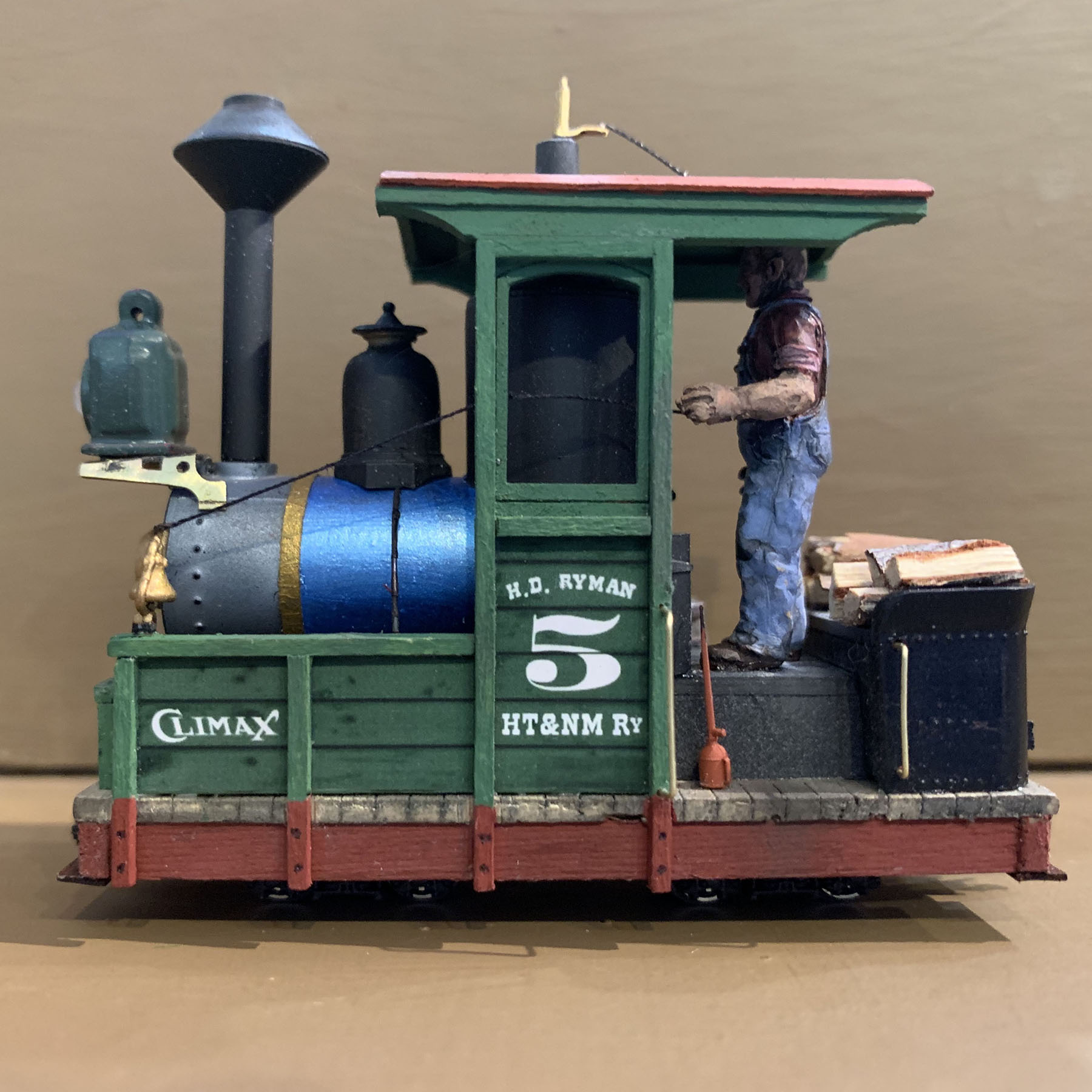 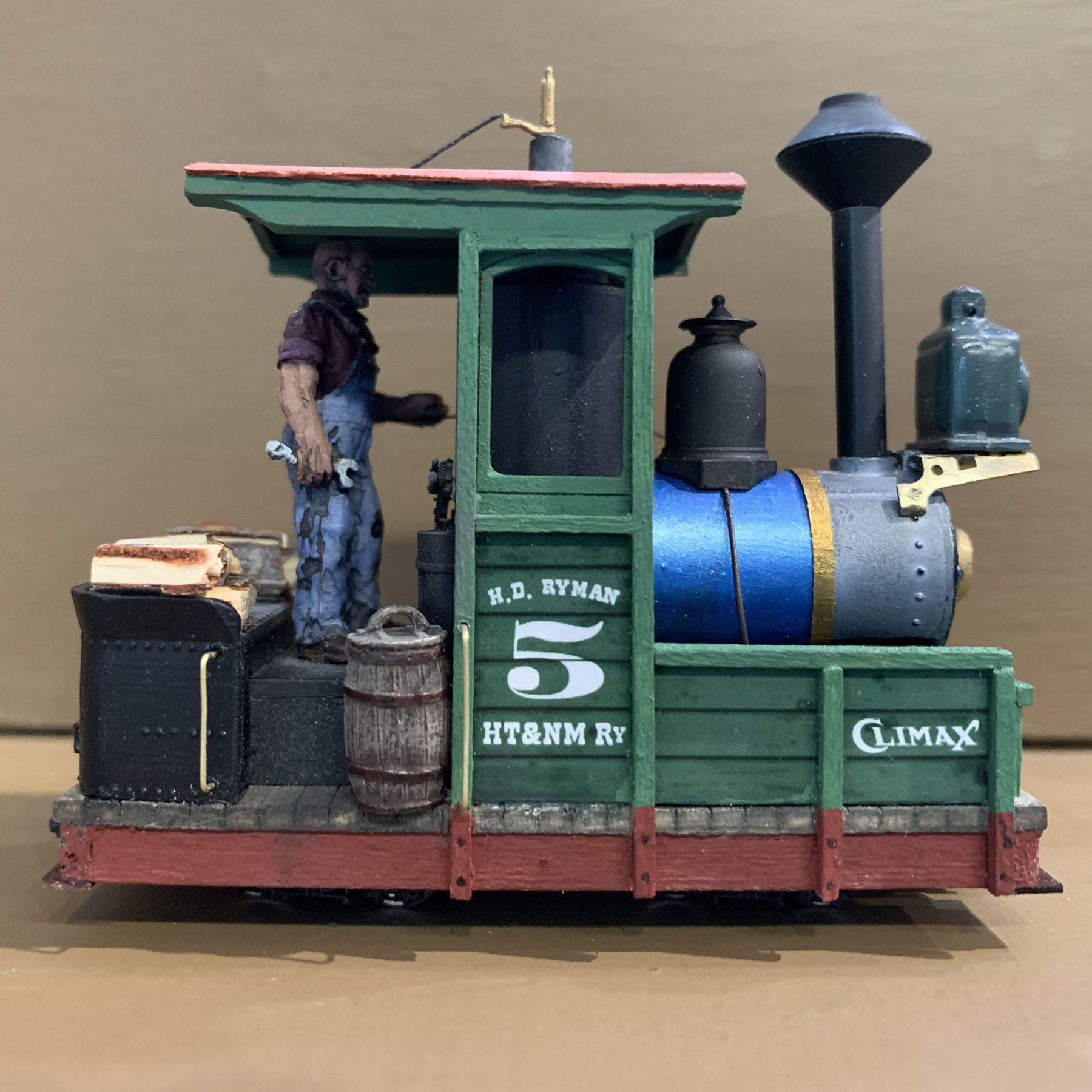 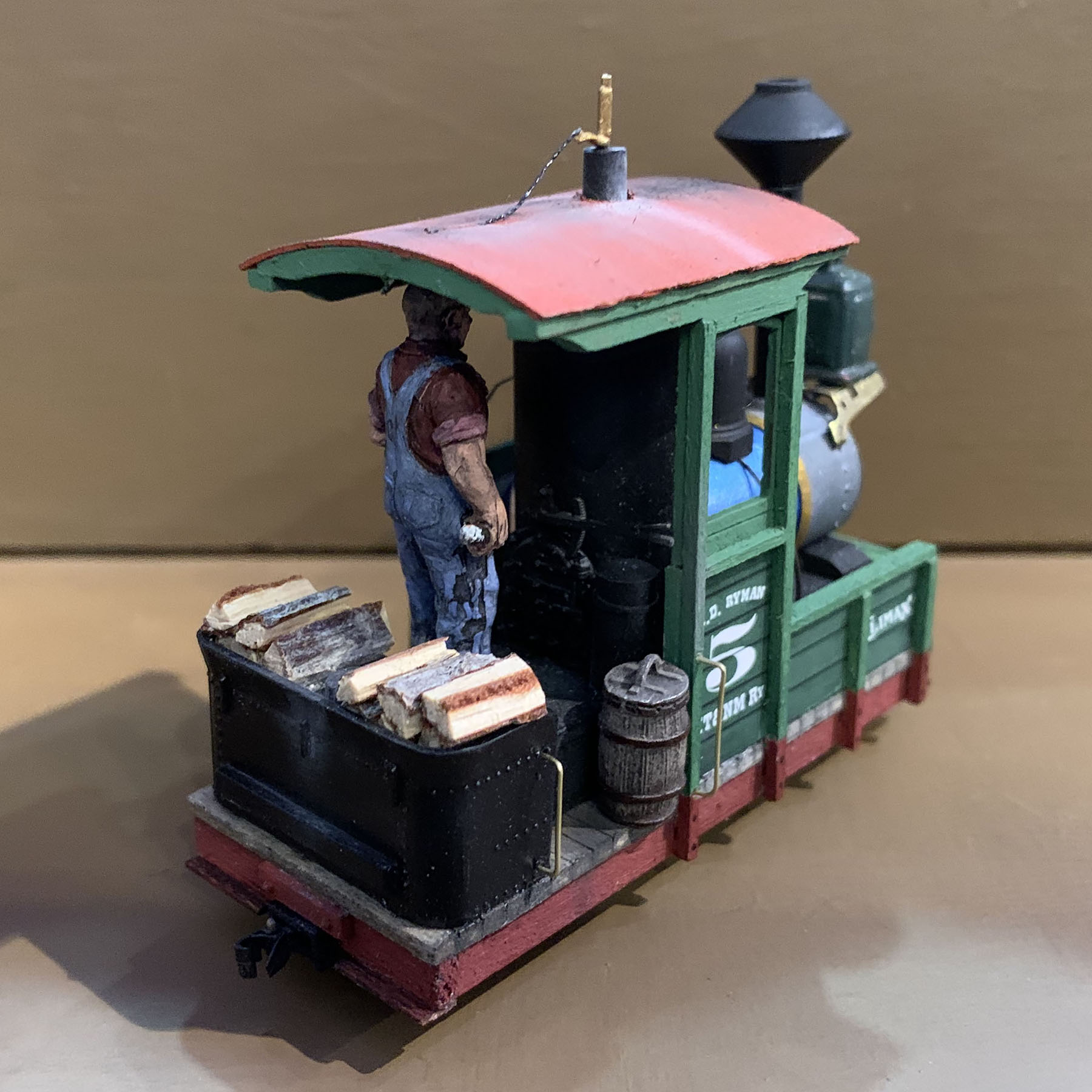 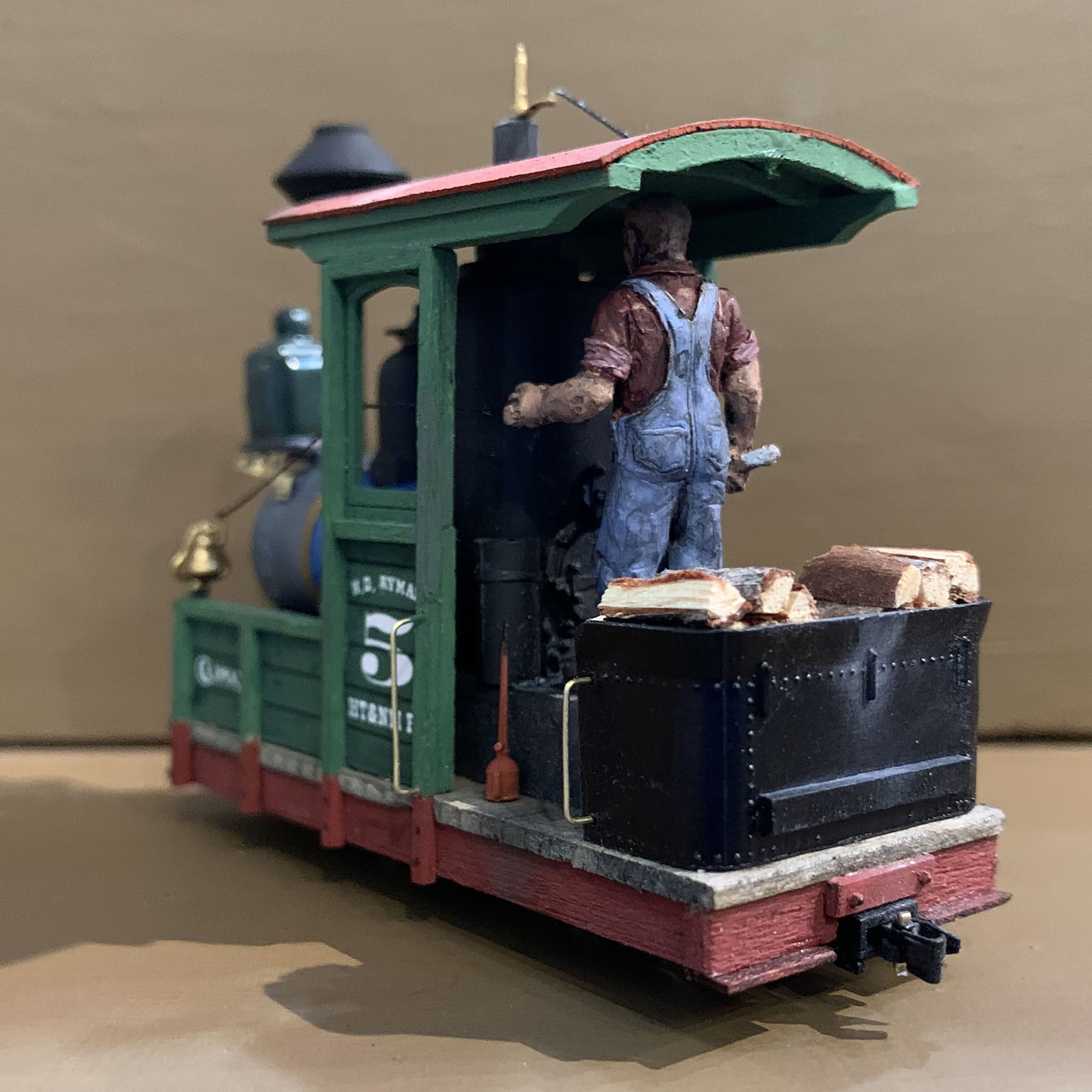 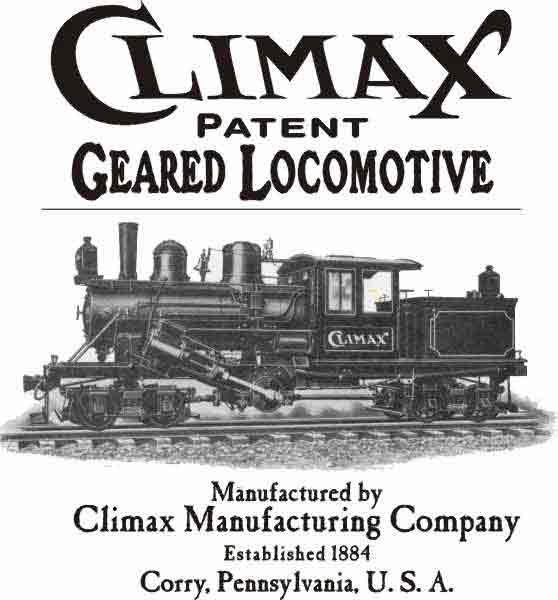 About the Climax Locomotive

The Climax geared locomotive was the invention of a skilled lumberjack and machinist named Charles D. Scott. He brought his drawings to the Climax Manufacturing Co. of Corry, PA, and the first locomotives of his design were built and delivered in 1888. Climax locomotives of ever improving design were manufactured until 1928 and more than 1,000 were built. Many loggers and miners considered the Climax to be superior to the similar Shay in hauling capability, stability, and performance.

My model represents one of the earliest models, known as a "Class A Climax." They had either vertical or "T" type boilers, with two vertical cylinders mounted in the center. Their construction was similar to that of a flat car or gondola, with boxy wooden sides built up to protect the crew and fuel from the elements. Most had a round water tank in the rear, though my model employs a rectangular tank to save on space. Though I've never seen a photo of a Climax locomotive this small, I'd like to think that such a critter was at least possible.