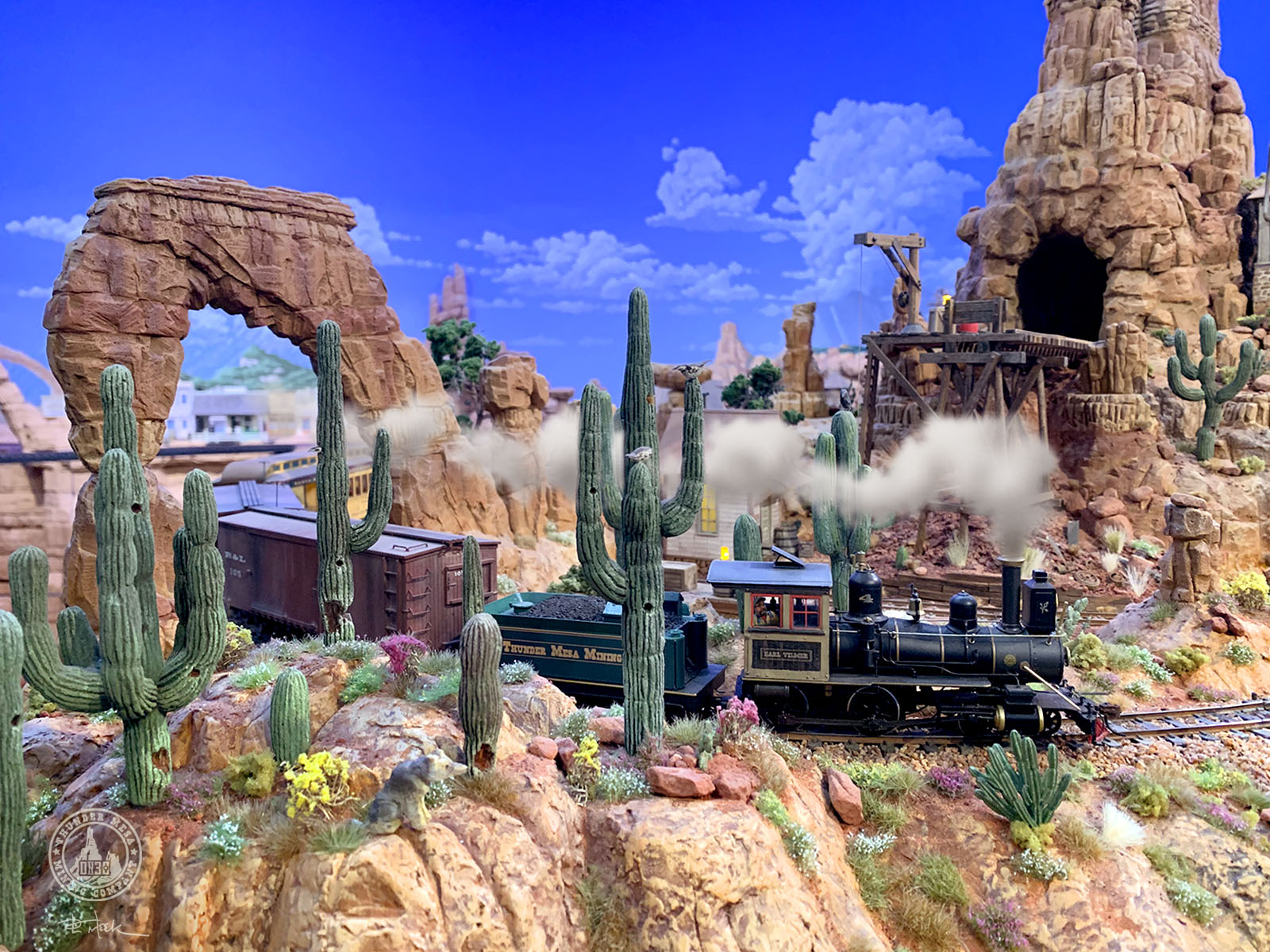 What's in a Name?

Most locomotives on the TMMC are loosely based on Disney park prototypes and named for past Disney artists and Imagineers whom I admire. An exception is #8, Bud Hurlbut, which was named for the talented mastermind behind Knott's Calico Mine Ride and so many other memorable attractions. The TMMC also runs two locomotives acquired from the sadly defunct Estrella & Sonora Grande RR. These little Porters were a labor of love for my friend, the late Verne Niner, and I am thrilled that they have found their way to Thunder Mesa. As of this writing, there are six locomotives operating on the TMMC, with at least six more planned or under construction. 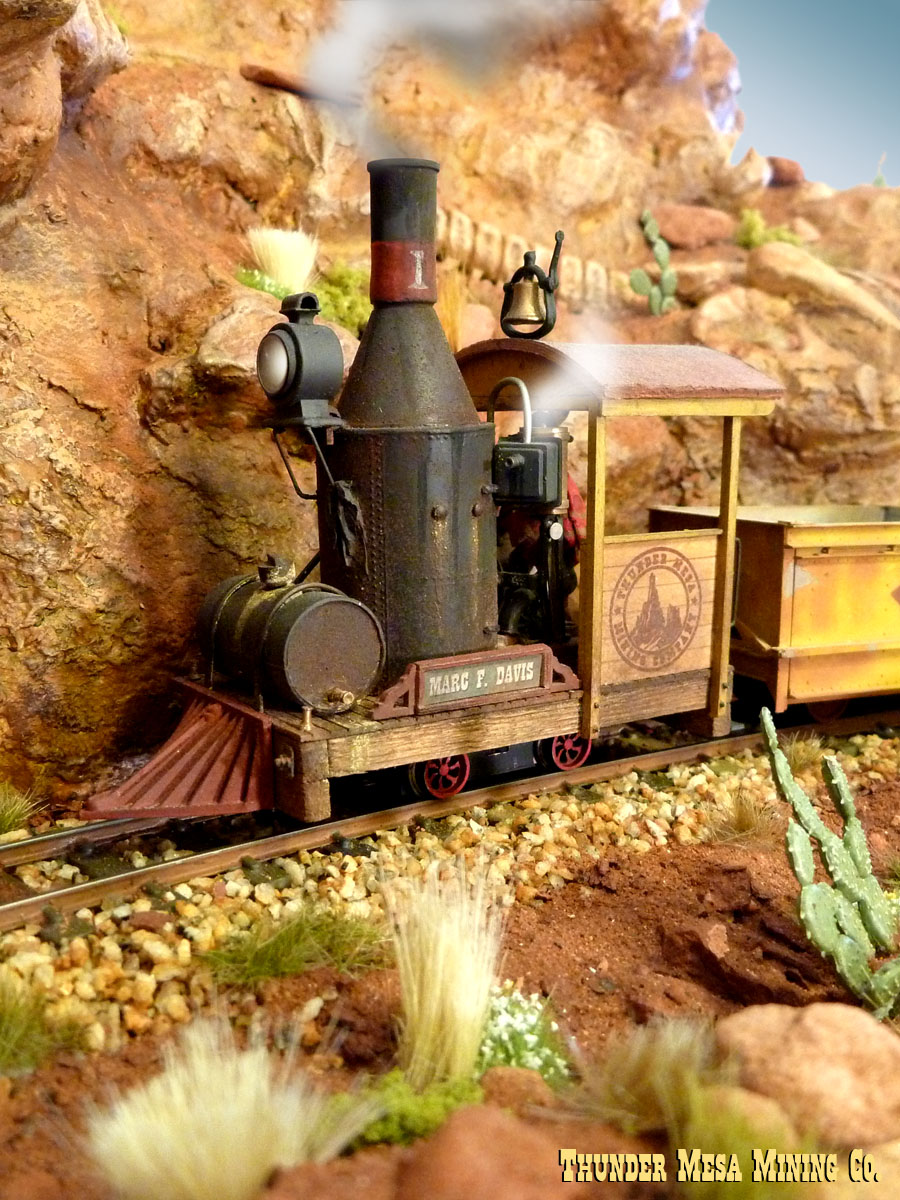 Wheel arrangement: 0-4-0
Builder: Thunder Mesa Mining Co.
Entered service: 1878
Notes: This unique vertical boiler, single piston steamer was built from the recovered wreckage of a steam launch and the 2-4-0 El Dorado. Placed into service in 1878 to help complete construction of the railroad. Named for the proprietor of the Western River Expedition Company.

Modeling notes: Scratch-built from spare parts on a Bachmann HO cable car power truck. Analog DC power. No sound. Mostly a static model these days, though I might rebuild it in the future on a better chassis with DCC. TMMC #1 is a tiny locomotive with no known prototype. It shares certain characteristics with some early vertical boiler Climax and Shay type locomotives, but its main inspiration comes from the two walking-beam locomotives seen as set pieces at Big Thunder Mountain in Anaheim. Named in honor of legendary Disney animator and Imagineer, Marc Davis. 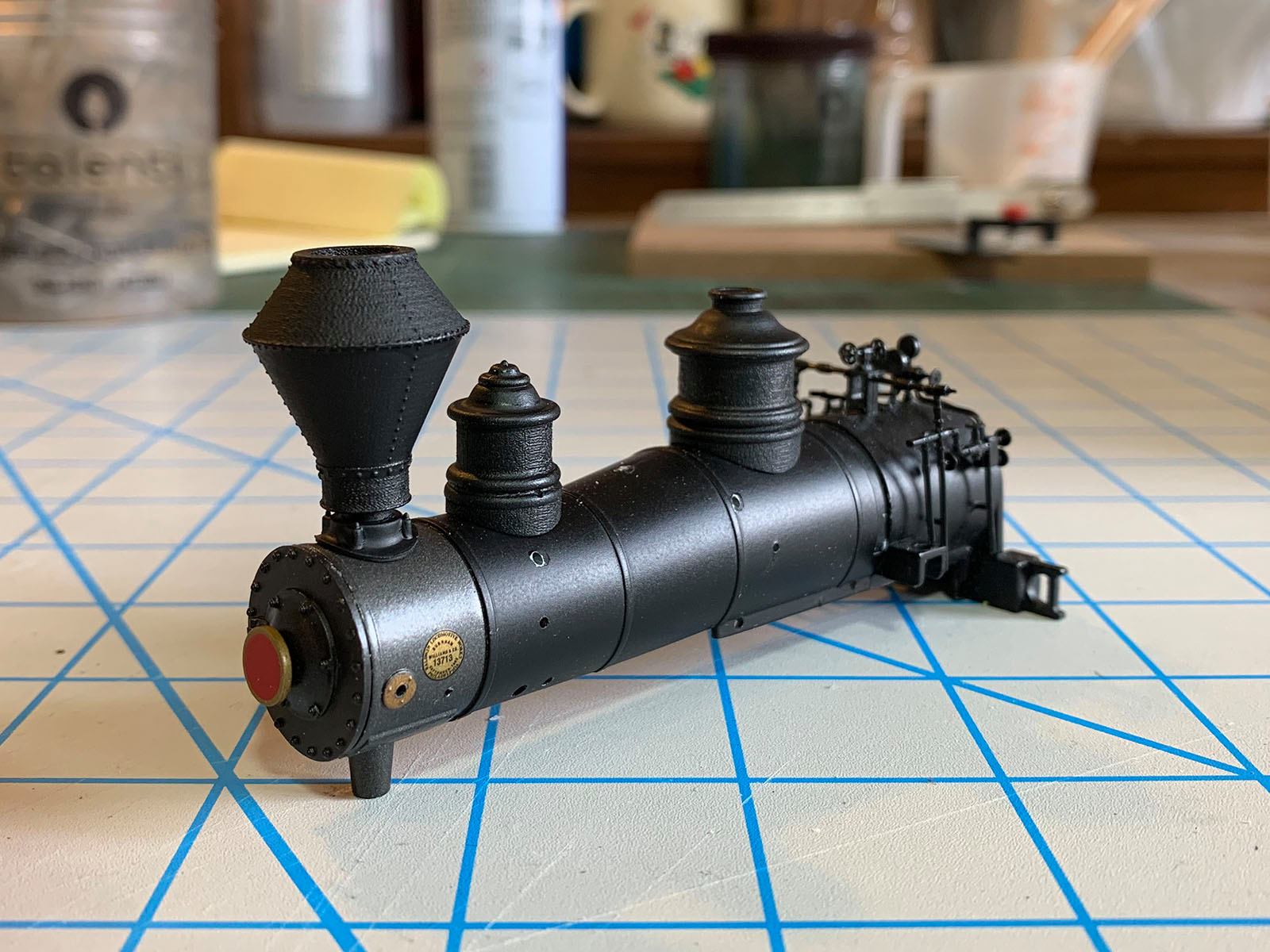 Modeling notes: Under construction. Bachmann On30 inside frame 4-4-0. Inspired by the Central Pacific, South Pacific Coast, and the Santa Fe & Disneyland Railroad. DCC installed, sound to be added. Harper Goff was one of the very first Disney artists to join Walt at WED Enterprises. Harper played the banjo, and, like Ward Kimball, was a talented artist, musician and train enthusiast. He was the primary designer of Main Street USA and modeled it after his home town of Fort Collins, CO. He also laid out the course of the Jungle Cruise and later designed Captain Nemo's submarine, the Nautilus, for the Disney film, 20,000 Leagues Under the Sea. 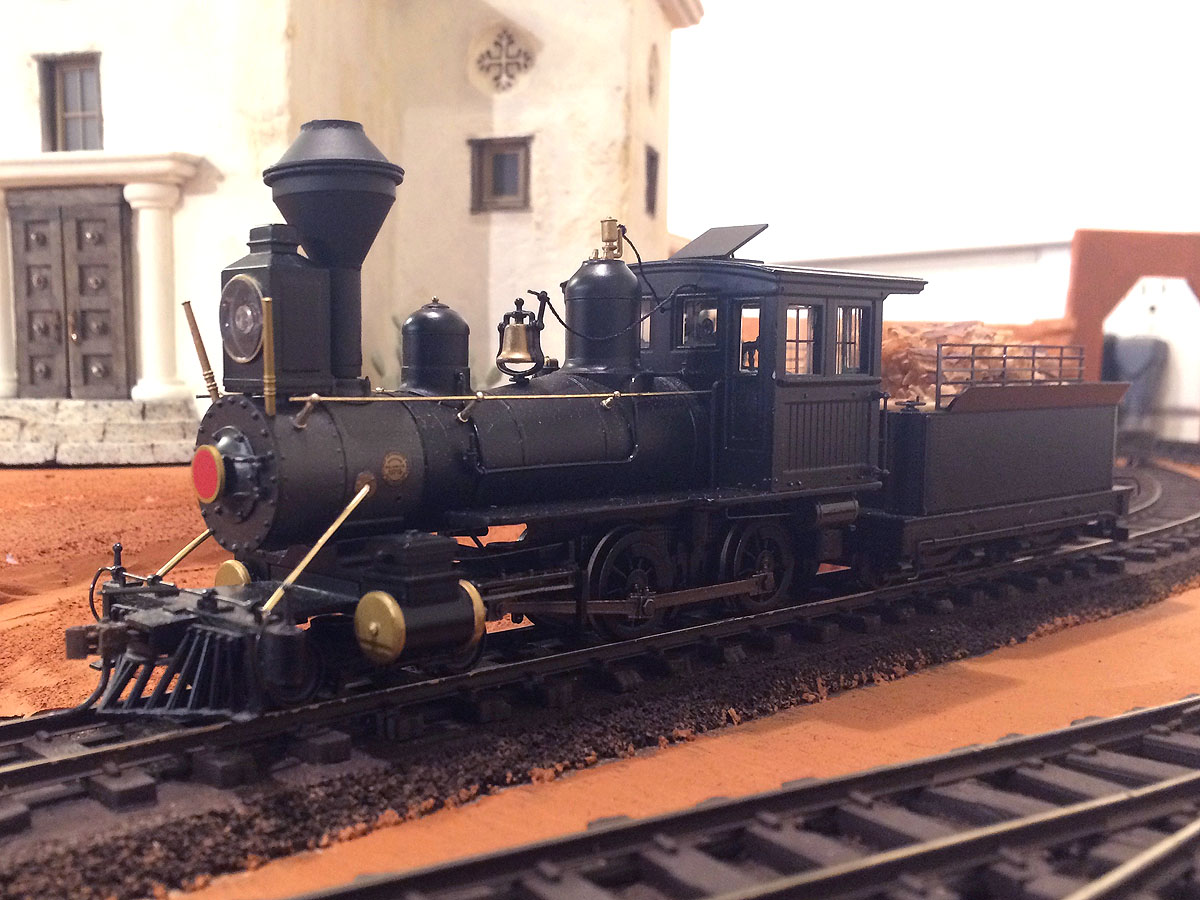 Modeling notes: Planned. Bachmann On30 4-4-0. DCC and Tsunami sound on board. This locomotive will be styled similar to early D&RG locomotives and is named in honor of Disney Imagineer Claude Coats, one of the original Imagineers tasked with creating Rainbow Caverns on the old Mine Train Ride. Coats was responsible for the amazing multi-colored water effects inside the caverns. 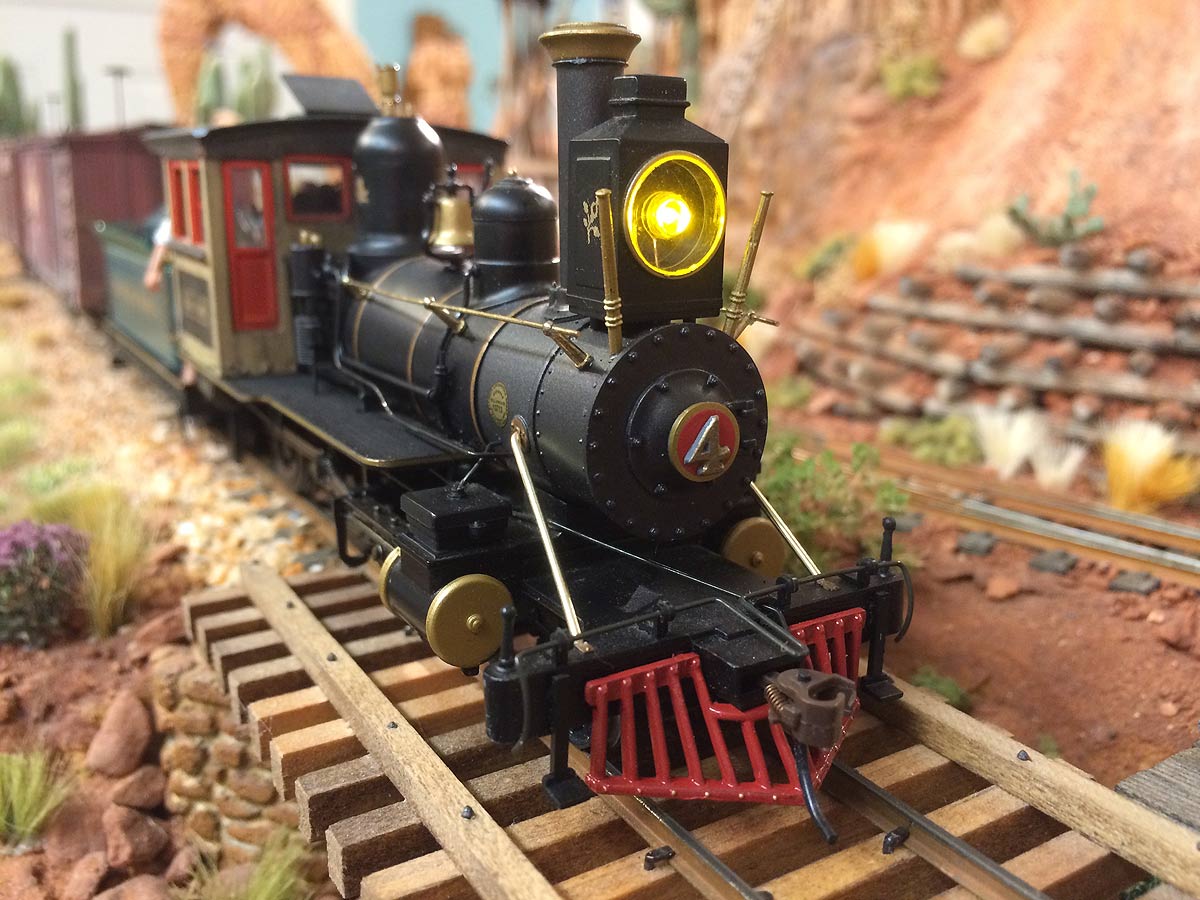 Modeling notes: Bachmann On30 inside frame 4-4-0. Inspired by the Santa Fe & Disneyland Railroad. DCC installed, sound to be added. Earl Vilmer supervised the construction and operation of both the Disneyland and Walt Disney World Railroads. 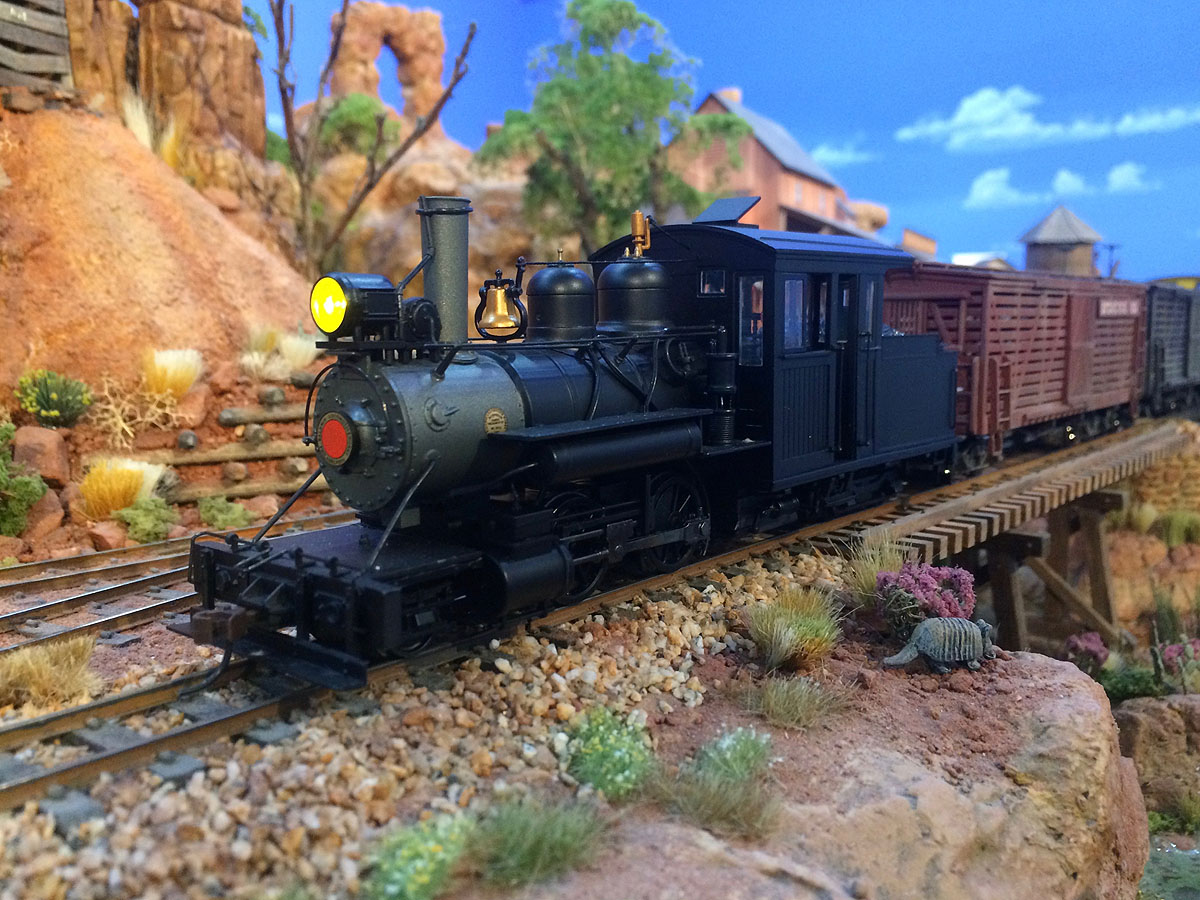 Modeling notes: Under construction. Bachmann Forney modified to 2-4-0 with tender. Inspired by Disneyland's #5 locomotive, the Ward Kimball. DCC control. Named for Ward Kimball, Disney's mad genius animator and unparalleled train enthusiast. It's worth noting that the "Ward" might be the only TMMC locomotive that also has a namesake in the parks. 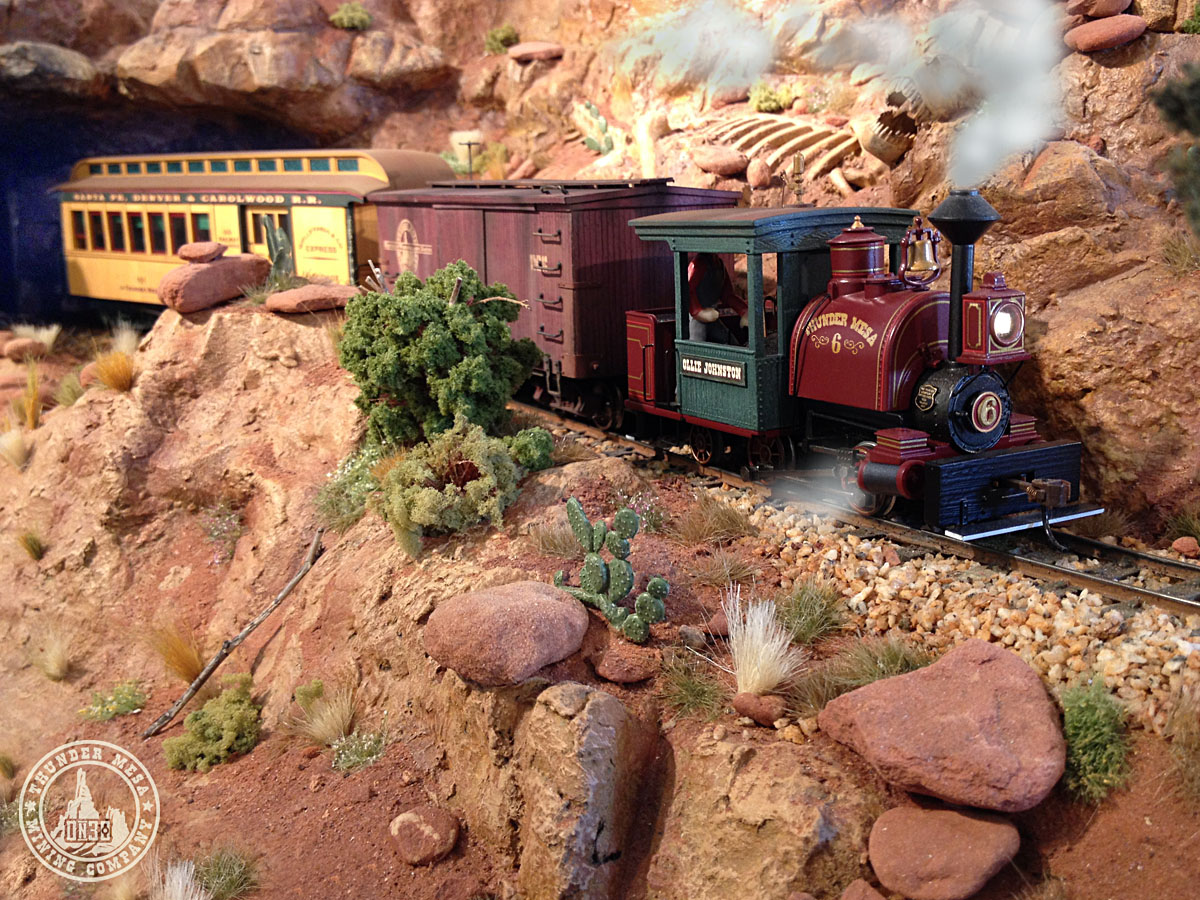 Modeling notes: Bachmann On30 0-4-2. Inspired by Big Thunder Mountain Railroad. DCC and Tsunami sound on board. Ollie Johnston was a legendary Disney animator, train enthusiast, one of the Nine Old Men and best friends with Frank Thomas. 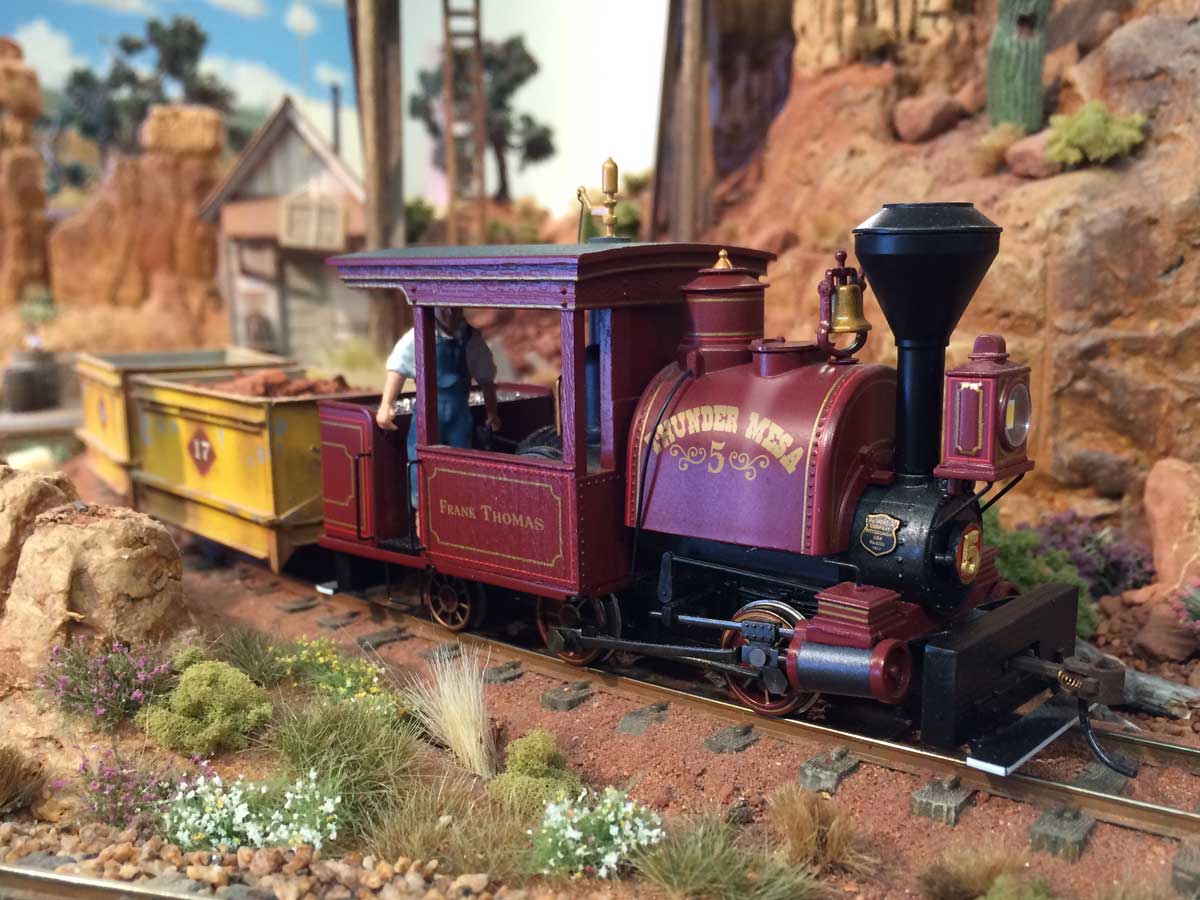 Modeling notes: Bachmann On30 0-4-2. Inspired by Big Thunder Mountain Railroad. DCC and Tsunami sound on board. Frank Thomas was a legendary Disney animator, one of the Nine Old Men and best friends with Ollie Johnston. 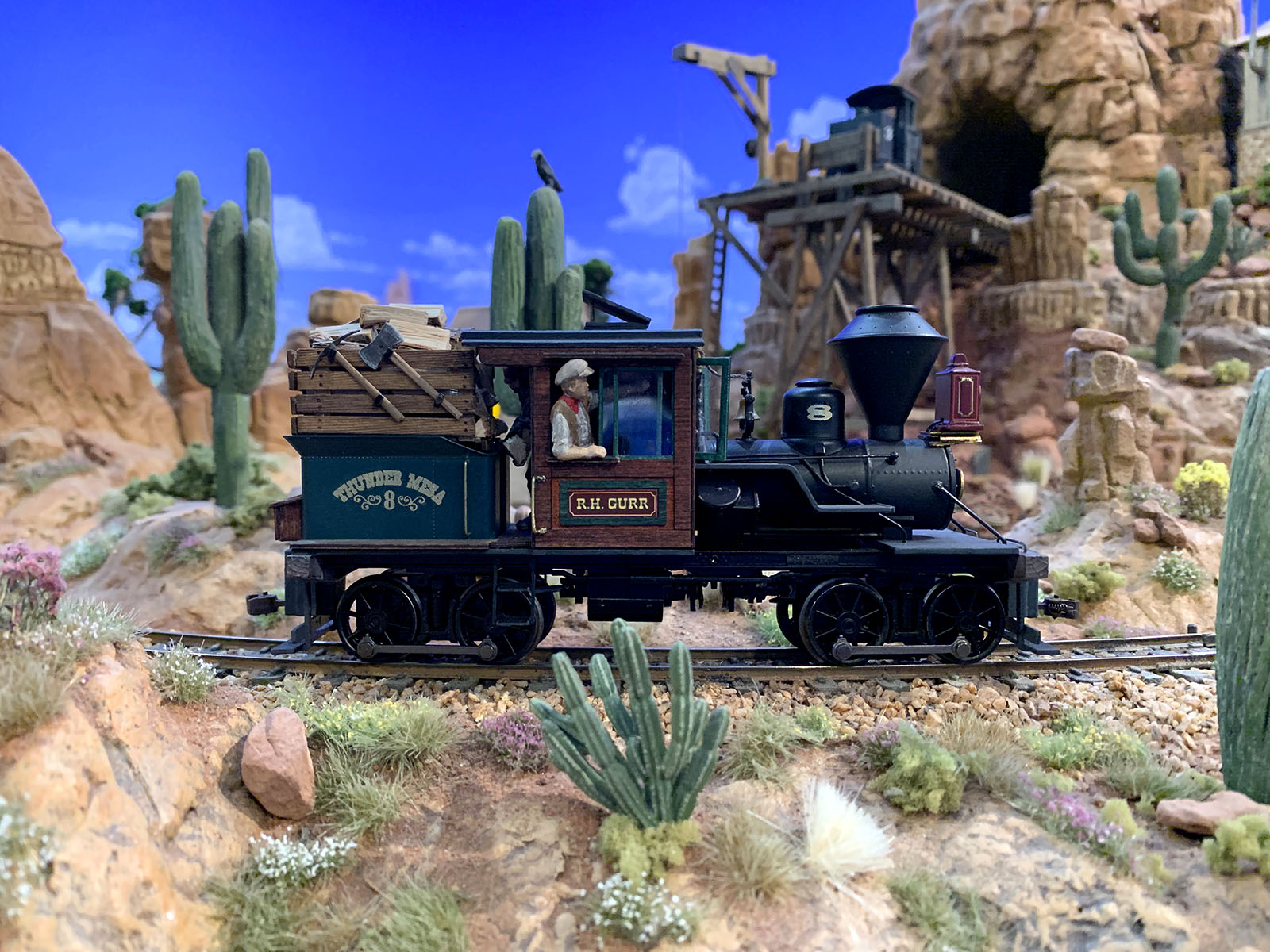 Modeling notes: Modified Bachmann Stearns-Heisler. DCC and Tsunami sound on board. Named in honor of Bob Gurr, the brilliant designer and engineer behind just about anything with wheels at Disneyland, including the Monorail. 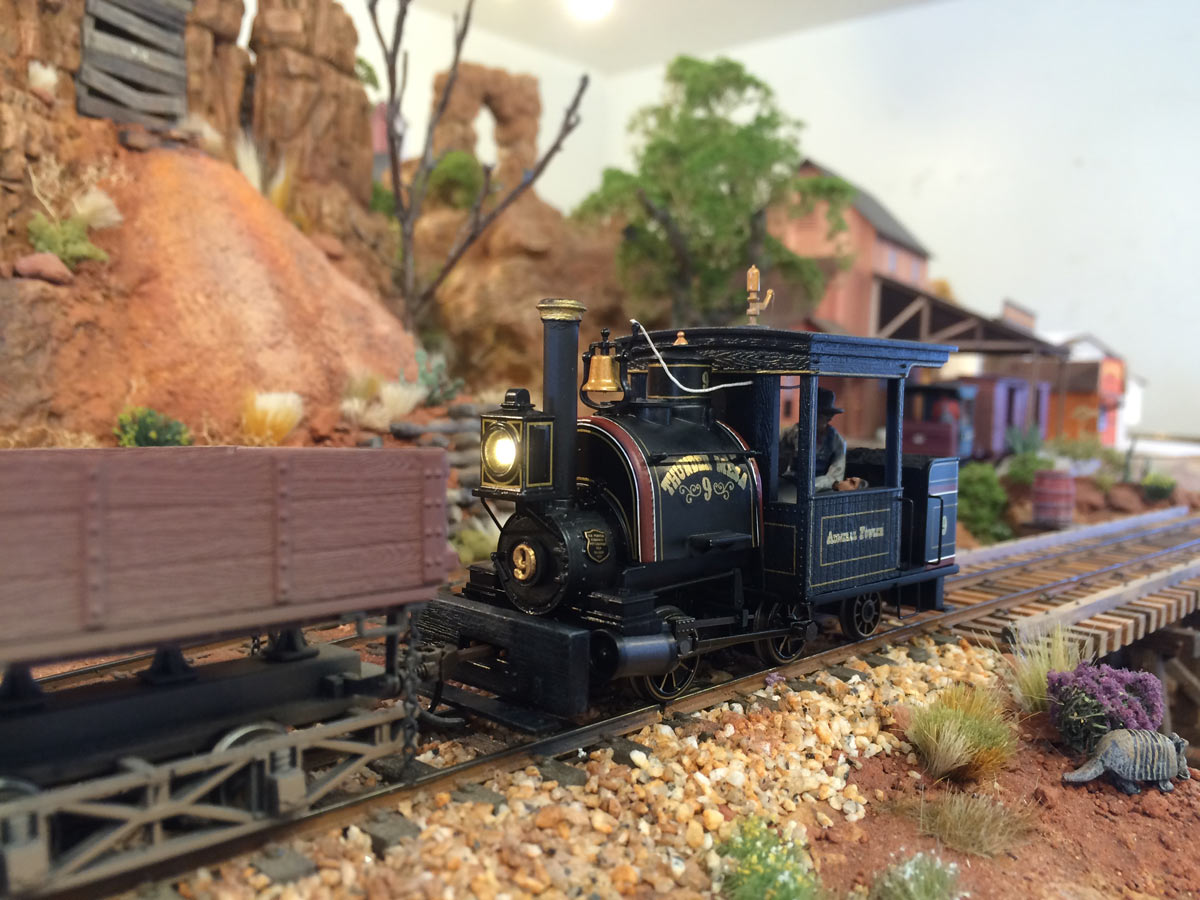 Modeling notes: Bachmann On30 0-4-2. DCC and Tsunami sound on board. This Porter is named in honor of Admiral Joe Fowler, The man Walt Disney put in charge of Disneyland's construction, and who stayed on as general manager of the park for its first decade. 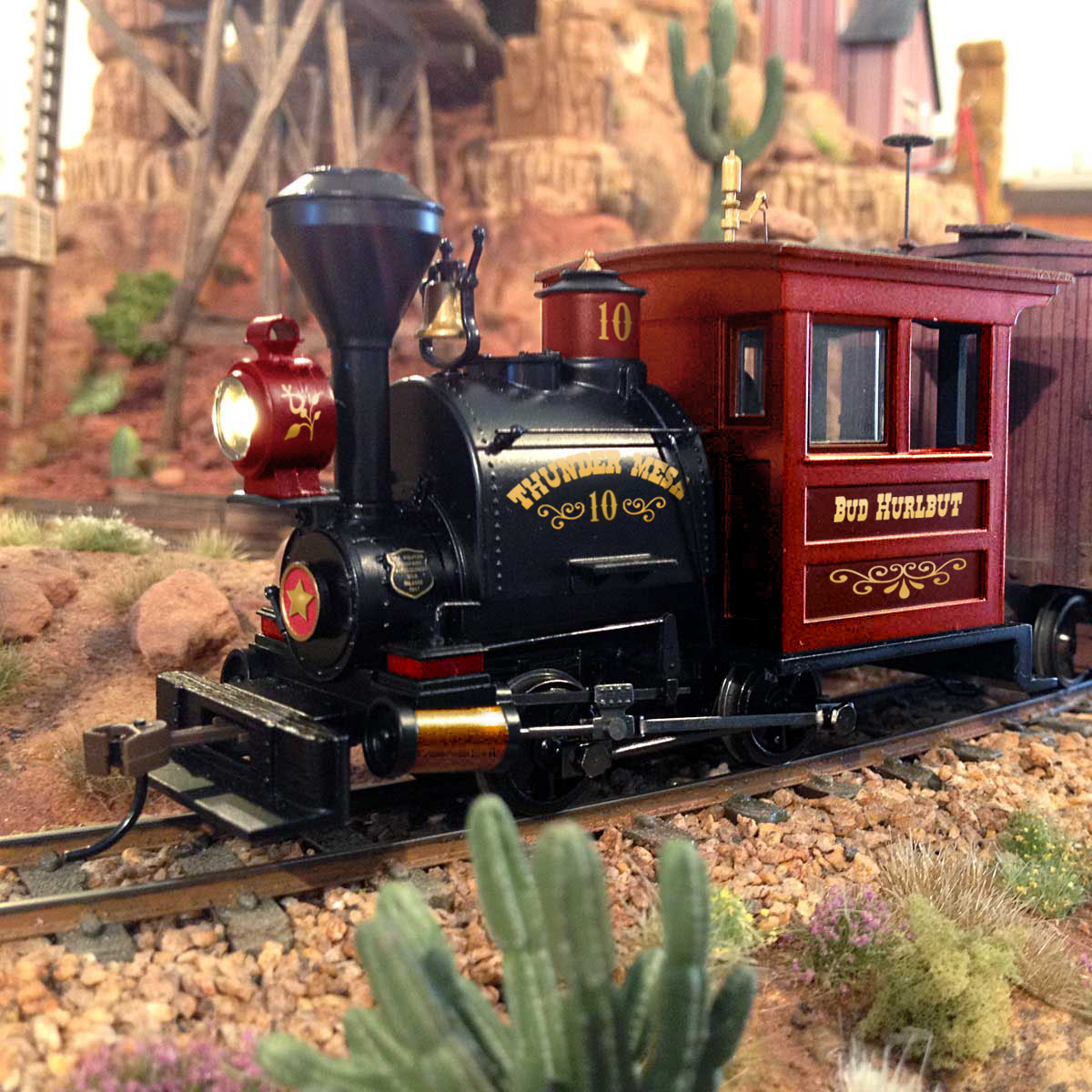 Modeling notes: Bachmann On30 0-4-0. Inspired by Knott's Calico Mine Train. DCC and Tsunami sound on board. Bud Hurlbut was a pioneering theme park designer best remembered for creating the Timber Mountain Log Ride and Calico Mine Train attractions at Knott's Berry Farm. 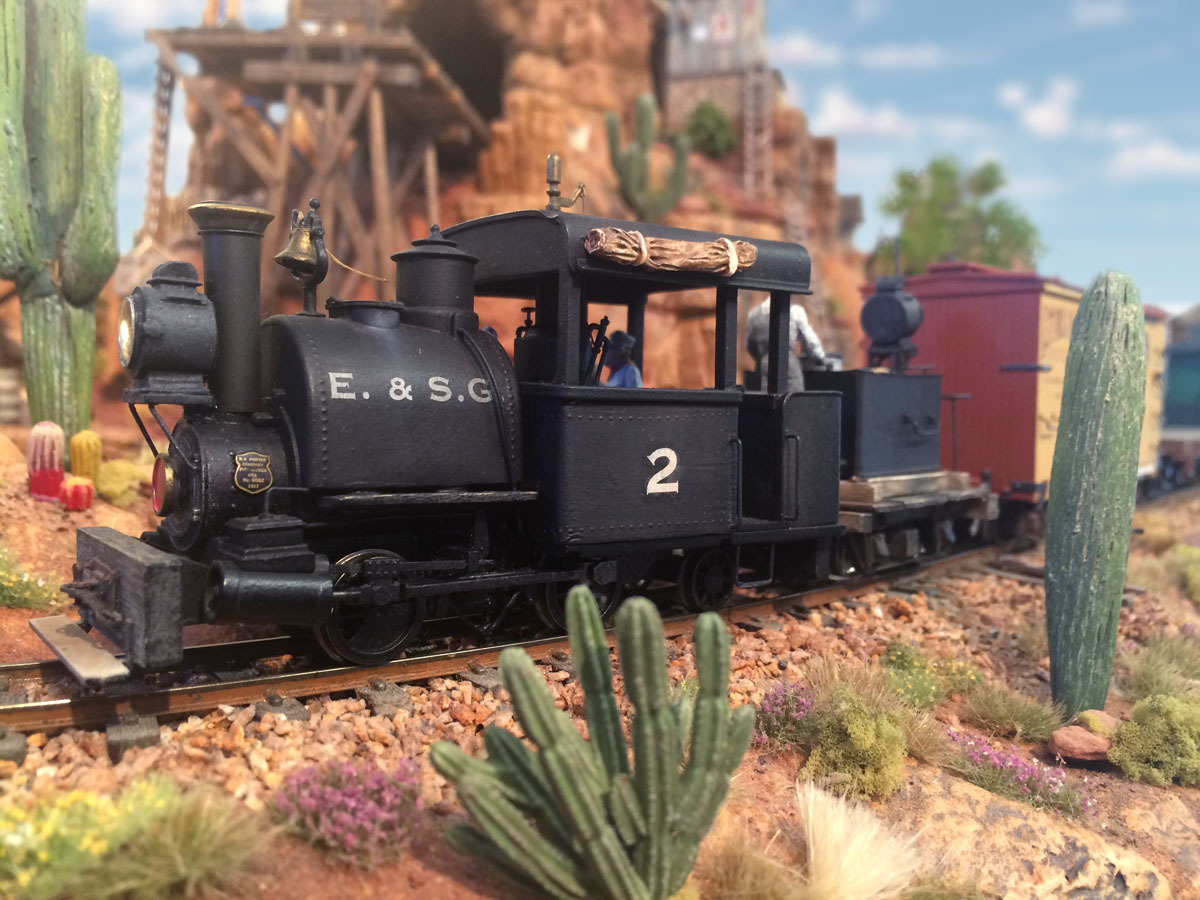 Modeling notes: This is a heavily modified Bachmann model built by Verne Niner. The 4-wheel tender was built atop an On30 passenger car truck and provides much needed additional electrical pick-up. Lots of extra weight has also been added. DCC Equipped with Tsunami sound. 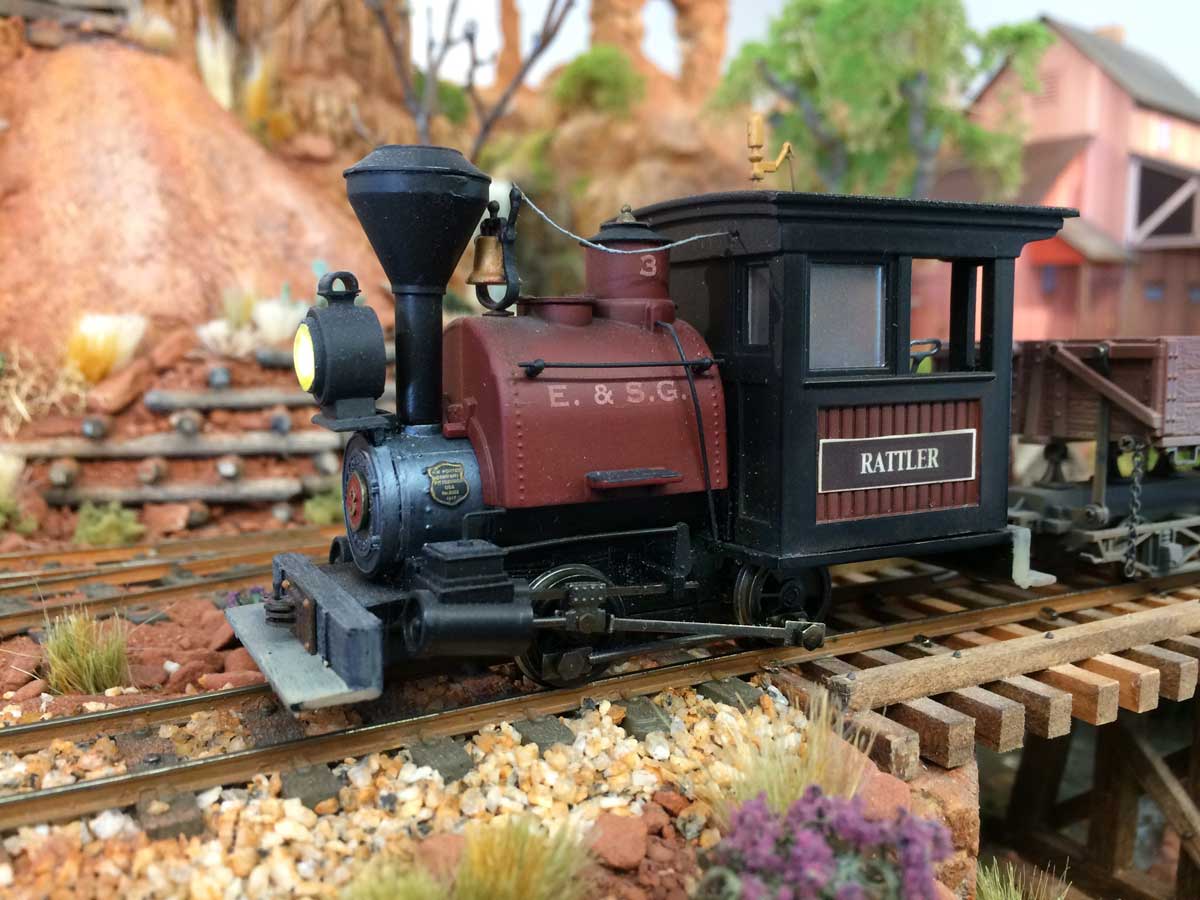 Modeling notes: Another Bachmann Porter modified by Verne Niner. The 3-spot has a Soundtraxx Keep-Alive Capacitor hidden beneath the cab roof. DCC Equipped with Tsunami sound.

An On18 mining tram, the Horse Thief & Never Mine, runs at a higher level than the TMMC and shuffles ore cars back and forth from Never Mine Tunnel, through Big Thunder Camp, and on to the ore bins near Horse Thief Canyon. N scale track is 9mm gauge, roughly 18" in O scale, so N scale mechanisms make a good starting point for modeling On18. All three HT&NM locomotives run on straight DC power and are in various stages of completion. 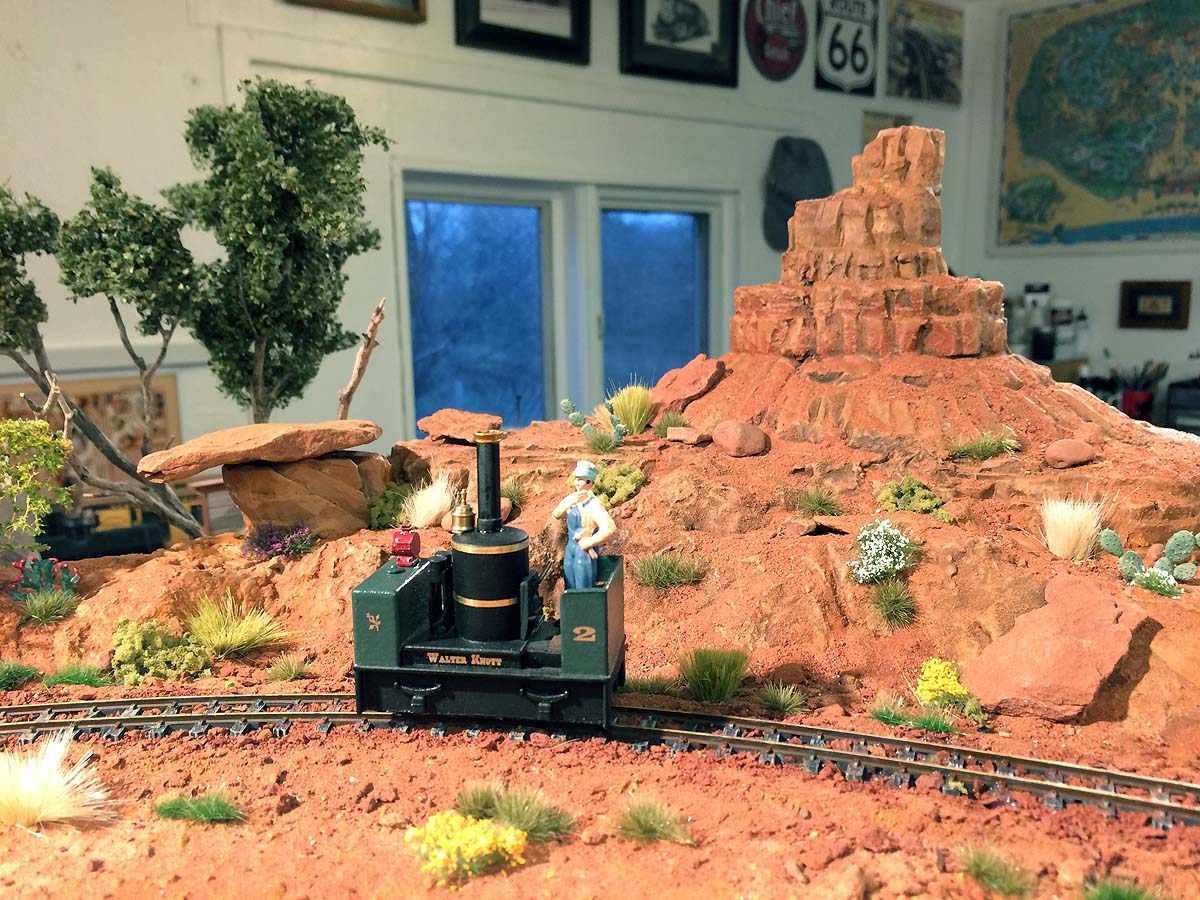 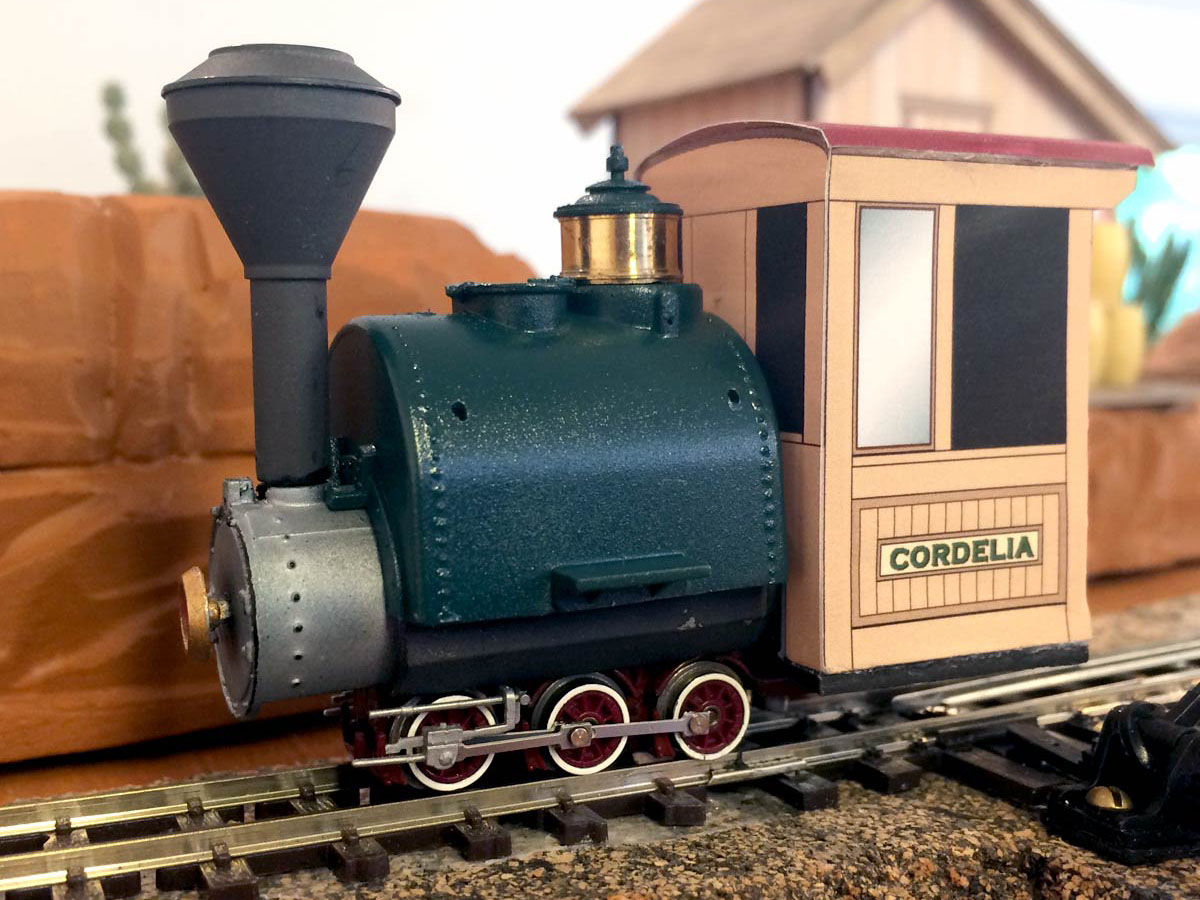 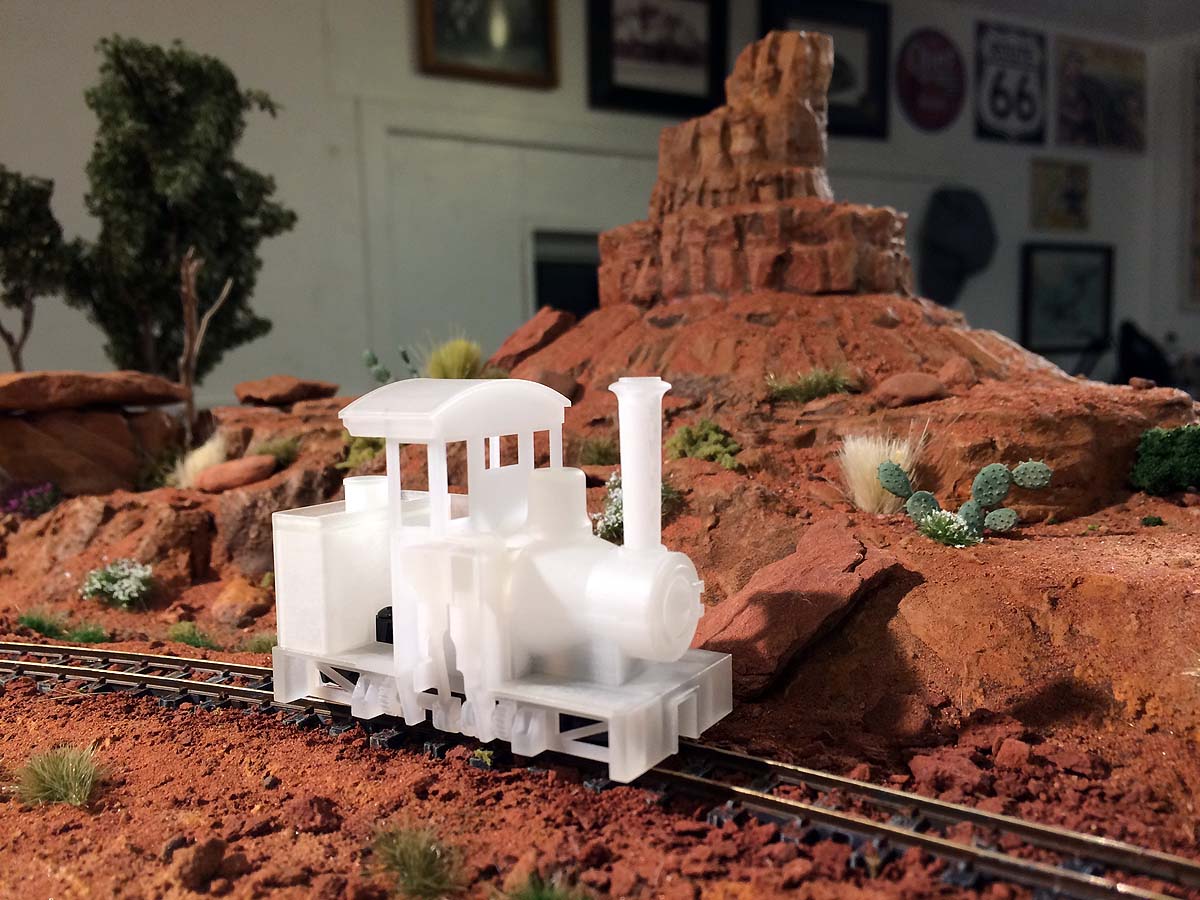 Engines number 1 and 3 are built from 3-d printed parts atop a Kato 11-103 chassis. Number 2, Cordelia, is mostly scrap box parts on an Atlas 2-6-0 frame. The paper cab is temporary. All three are fine runners but only #1, the Walter, is anywhere near finished yet. More to come. 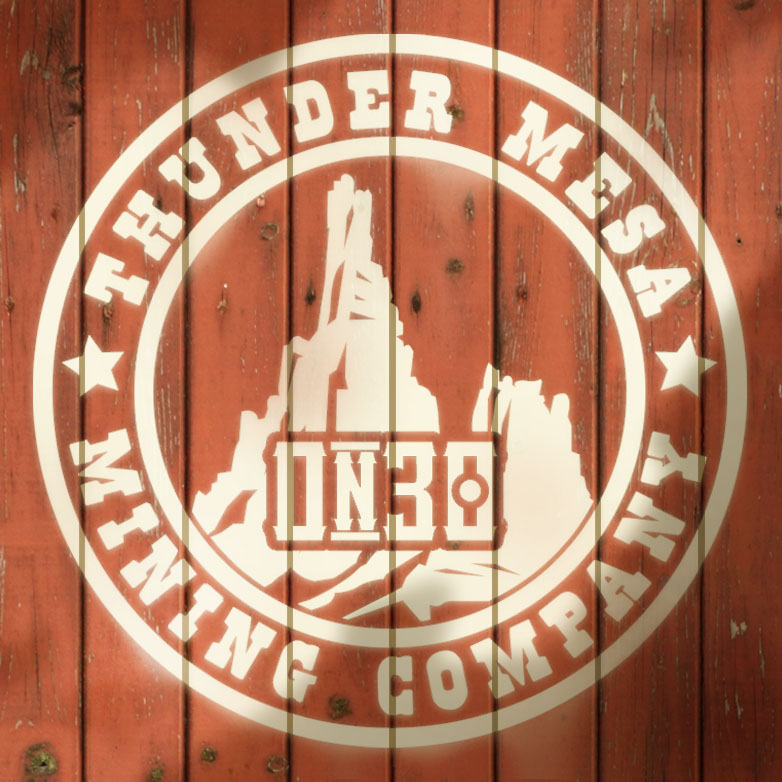