Out here in the Ooooooooold West, horses and trains go together just like bacon and beans! Thunder Mesa’s Circle D Ranch is home to the happiest horses on Earth, and in this episode I scratch build a brand new corral for them – made to look old with wood construction, staining, and weathering techniques. There’s even a working hinge for the ranch gate!

Saddle up, amigos – we ride!
Dave

Let's run some trains on the TMMC! Today we follow the exploits of three different trains on a typical day in Thunder Mesa Country. Plenty to see and hear in this Thunder Cam Special. Enjoy!

Let's pay a visit to Olson & Furlow's place, my scratchbuilt structure inspired by the modeling of John Olson and Malcolm Furlow. We'll take a look back at how the building was originally assembled, then retrofit the interior with new details and LED lighting. Should be fun! 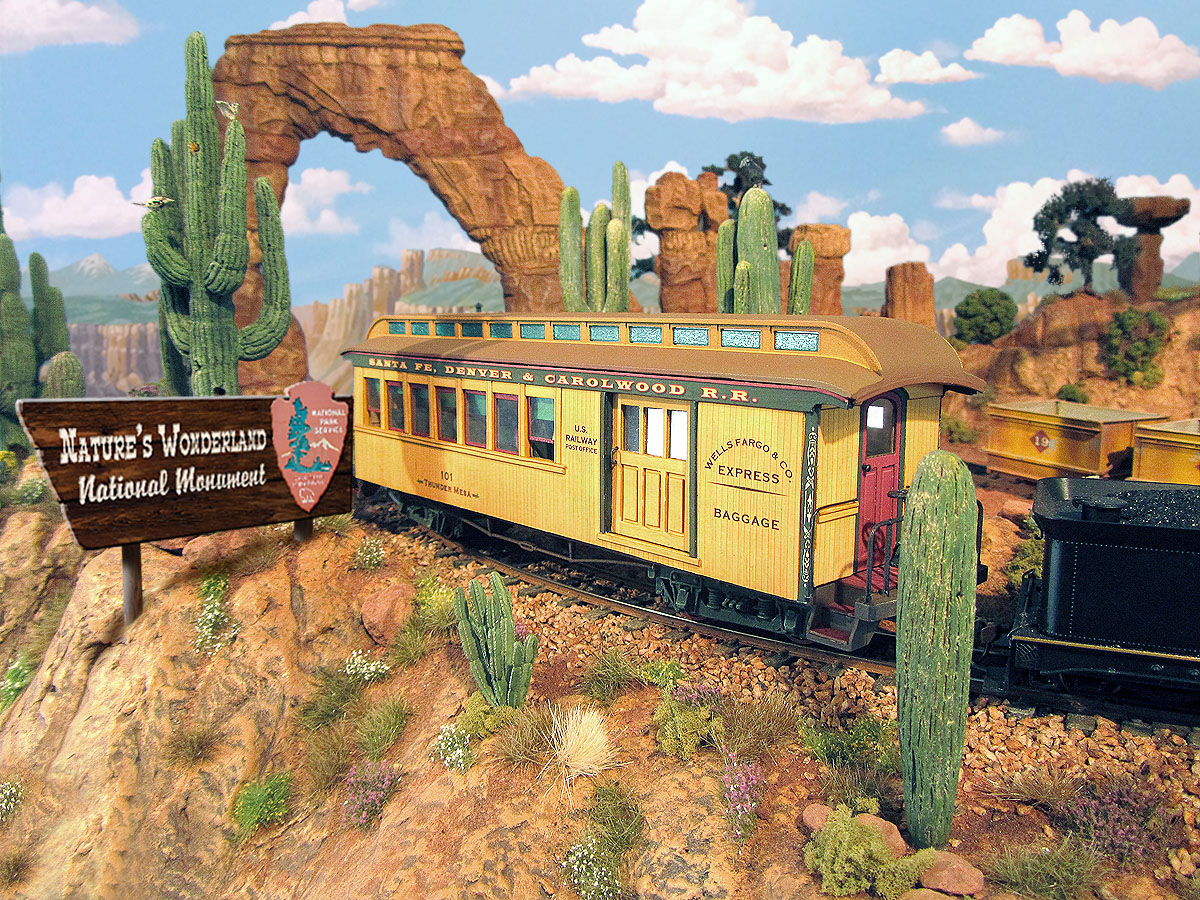 In the late summer of 1906, tensions were high in Thunder Mesa Country. Mining revenues were down, and the TMMC, and its parent road, the Santa Fe, Denver & Carolwood began pushing into new territories, including those controlled by the Estrella & Sonora Grande and Calico Gold Company. Naturally, the other companies pushed back, and by August, the battle over gold and silver claims in this wild canyon country had escalated to a fever pitch. It didn't take long for rival newspapers and political gangs to get in on the fight and soon they were tossing incendiary lies and insults in all directions. Before long it was greatly feared that conditions would deteriorate into physical violence. Armed toughs from Calico and banditos from San Lorenzo were quietly being recruited by both sides and an all out range war seemed imminent. 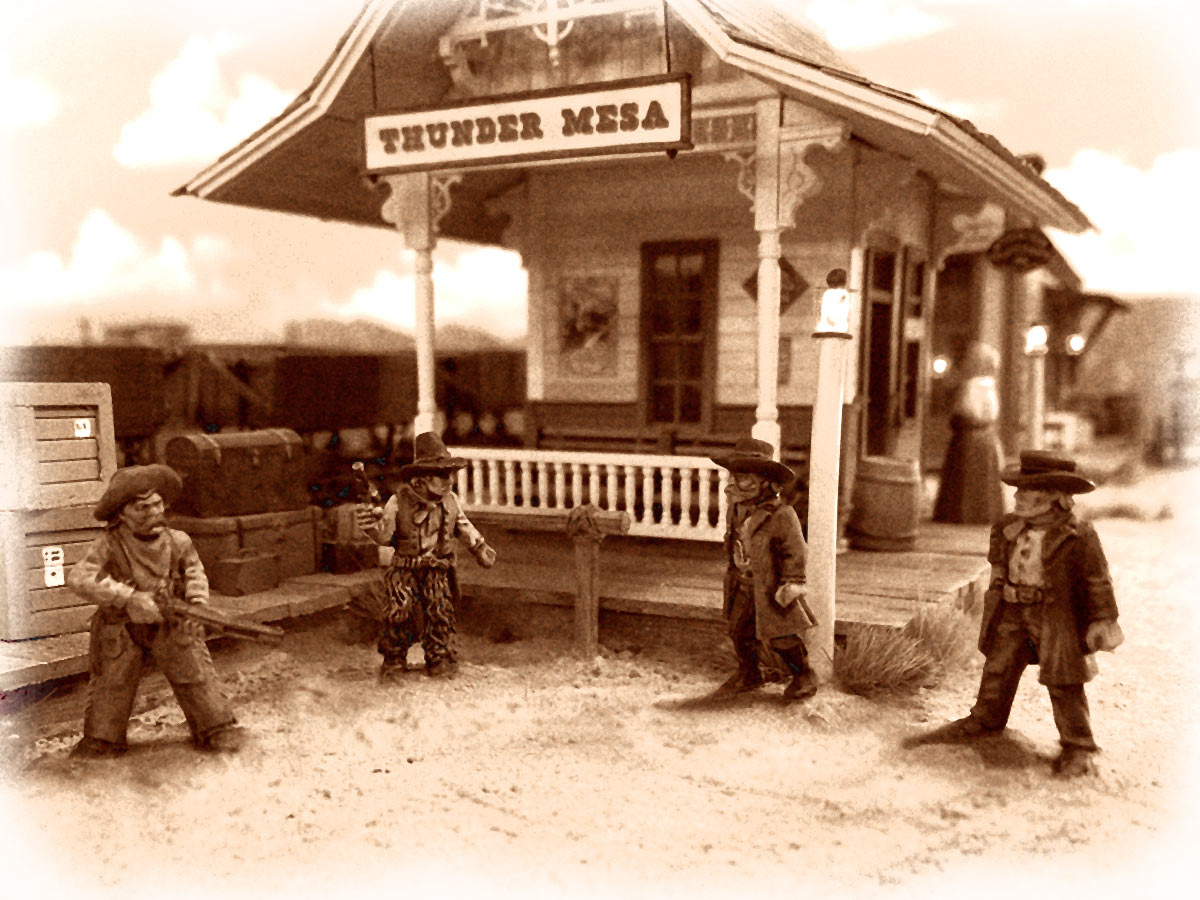 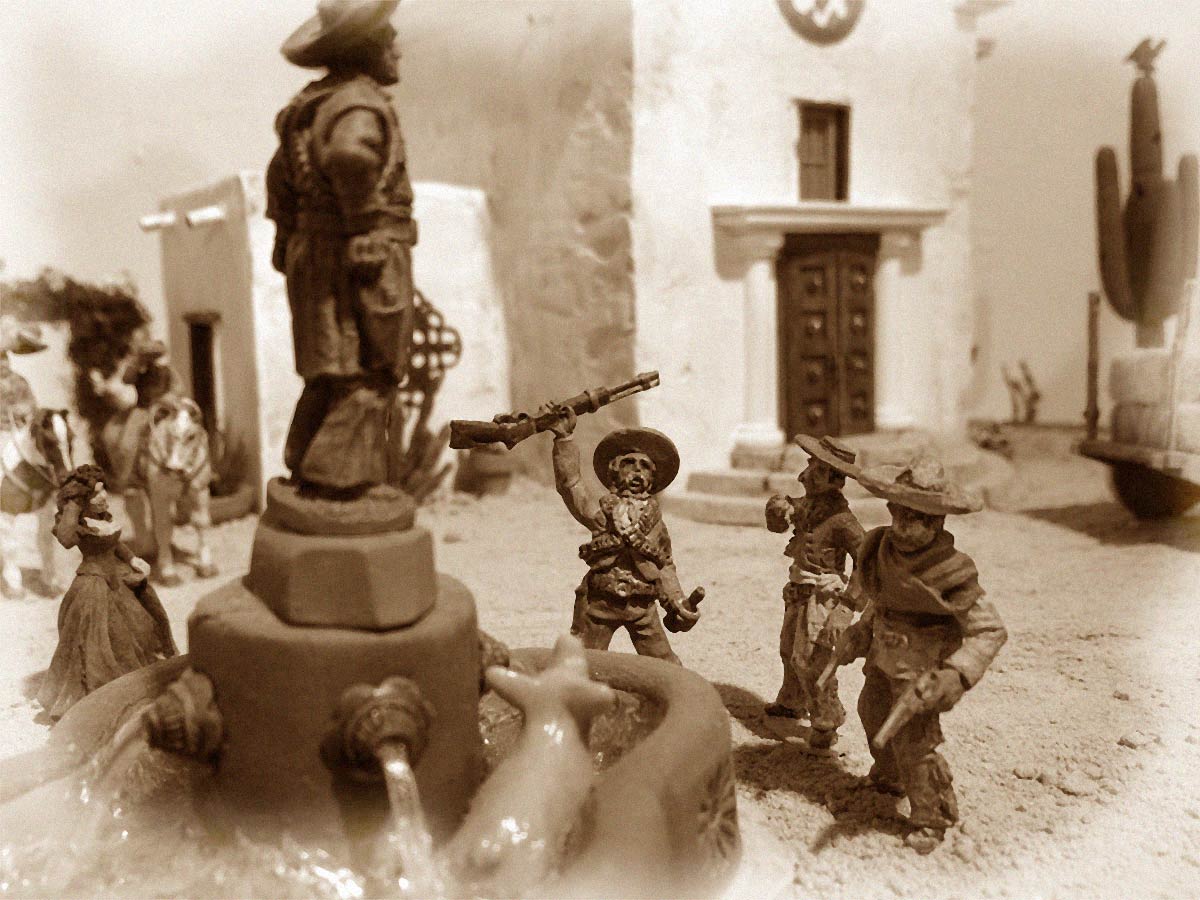 By the fall, none other than the President himself was preparing to intervene in the fracas. Traveling by private rail car, Theodore Roosevelt just happened to be on a secret hunting trip along the fertile bottomlands of Big Thunder Creek when he was briefed on the ensuing hostilities. After quietly surveying the natural wonders of the area (and shooting a dozen elk, two bears, a catamount, a duck, two armadillo, six coyotes, and three chipmunks), our 26th president made his presence known (as the story goes, he announced his presence by shooting a shot glass off the nose of the buffalo head in Big Thunder Saloon). He called a meeting of all aggrieved parties in what came to be known as the "Council of Calico." As it turned out, the President had been thoroughly delighted by the amazing buttes, canyons, geysers, and glittering caverns of Thunder Mesa Country and had concluded that the region deserved to be protected and preserved for the enjoyment of future generations. 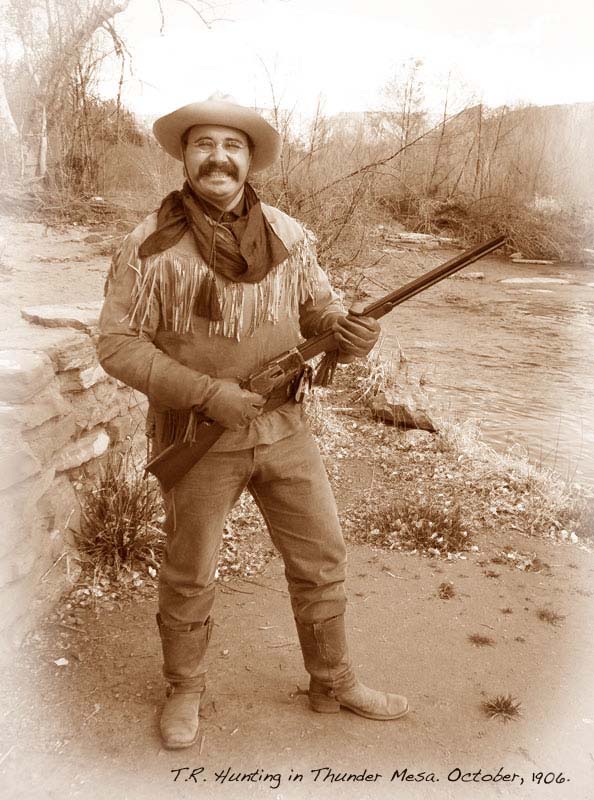 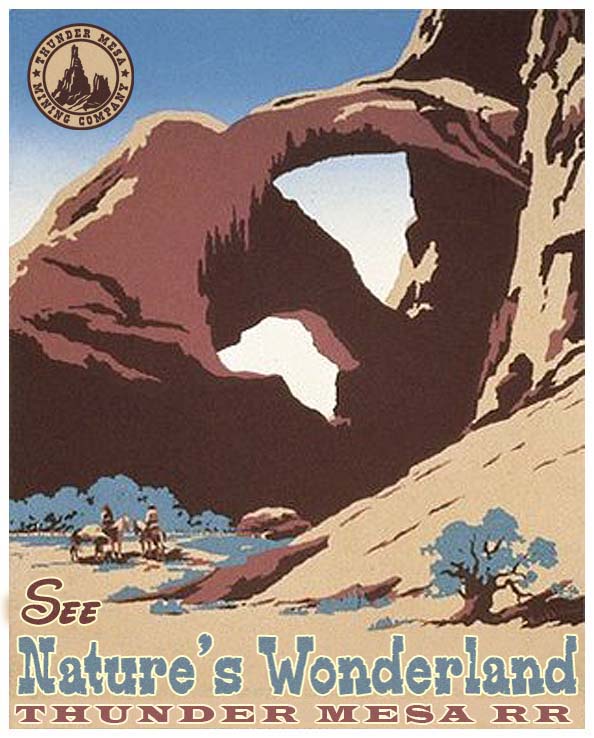 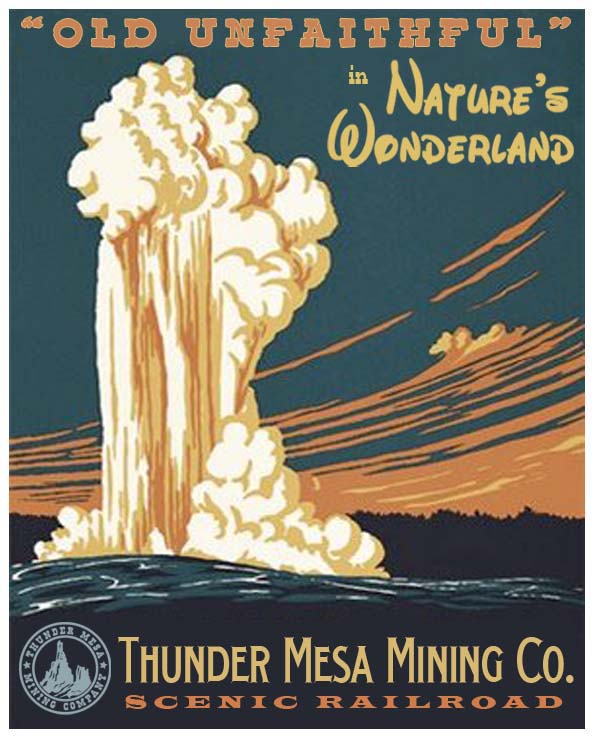 "Providence," said Roosevelt, "has been at work upon this land for untold ages. For here has been gathered an unmatched collection of natural curiosities and splendid scenic wonders. Verily, this "Nature's Wonderland" is an irreplaceable treasure of the United States and must be protected from the greed and petty concerns of short-sighted men."

Then, by presidential decree, he set aside the wild country on all sides of the TMMC right-of-way, excepting only existing claims, and effectively hemming-in the land hungry railroad. Invoking the newly minted Antiquities Act, and with the stroke of a pen, TR created Nature's Wonderland National Monument.

Of course, the railroads grumbled at first, but it soon became clear that the official designation and endorsement of the President himself would be a boon to the area. By 1905, the writing was on the wall as once rich finds at Calico and Big Thunder began to play out. This, in turn, had lead to the mining company's overreach into new territories already controlled by the Calico Gold Co. and Estrella & Sonora Grande. The "Roosevelt Solution" effectively put an end to the conflict while creating a rich new revenue stream for the TMMC.

TMMC management wasted no time in promoting tourism within the new monument as new excursion trains were quickly added to the schedule. Old ore gondolas were converted to carry passengers and secondhand coaches were procured from the Santa Fe, Denver and Carolwood to fill out the new trains. For its part, the SFD&C began to promote direct rail service to Thunder Mesa from Carolwood, Denver and Discovery Bay. By decade's end, tourism had replaced mining as 80% of the TMMC's revenue. In 1910, the TMMC also connected with the struggling Estrella & Sonora Grande Ry. near Lone Rock, and eventually came to control many of that line's assets.

Though the mines near Thunder Mesa were largely played out, the rich diggings around Calico continued to produce gold bearing ore well into the new century and the Calico Gold Co. remained independent until the crash of '29 forced a sale of its assets to the TMMC. Calico itself became a ghost town, and the once legendary mining camp merely another attraction for tourists aboard Thunder Mesa's colorful excursion trains.

After 1906, Theodore Roosevelt was never again seen in Thunder Mesa Country. However he did manage to visit other spectacular regions and preserve their natural wonders for future generations as well. As president, Roosevelt created five national parks and used the landmark Antiquities Act to unilaterally create 18 national monuments, including the Grand Canyon. He also set aside 51 federal bird sanctuaries, four national game refuges, and more than 100 million acres' worth of national forests.

Roosevelt's chance visit to Thunder Mesa was a classic case of the right man being in the right place at the right time. Without his wise intervention, it is doubtful that the railroad would have survived much beyond the boom times of the late 19th and early 20th centuries, and the spectacular region known as Nature's Wonderland might never have been preserved. Without Roosevelt, another chance visit by Walt Disney, Ward Kimball and Roger Broggie might never have occurred in the early 1950s, leading to a "rediscovery" of the Thunder Mesa line and sketchbooks full of ideas for a magical little park being planned for Southern California. But that legendary visit is a story for another day. 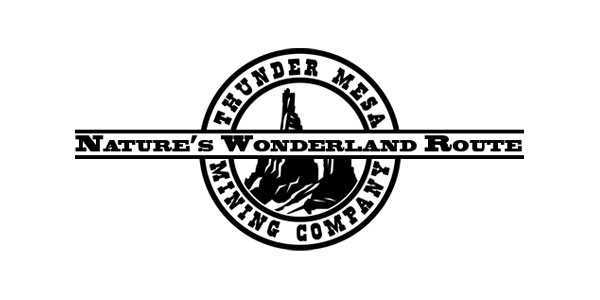 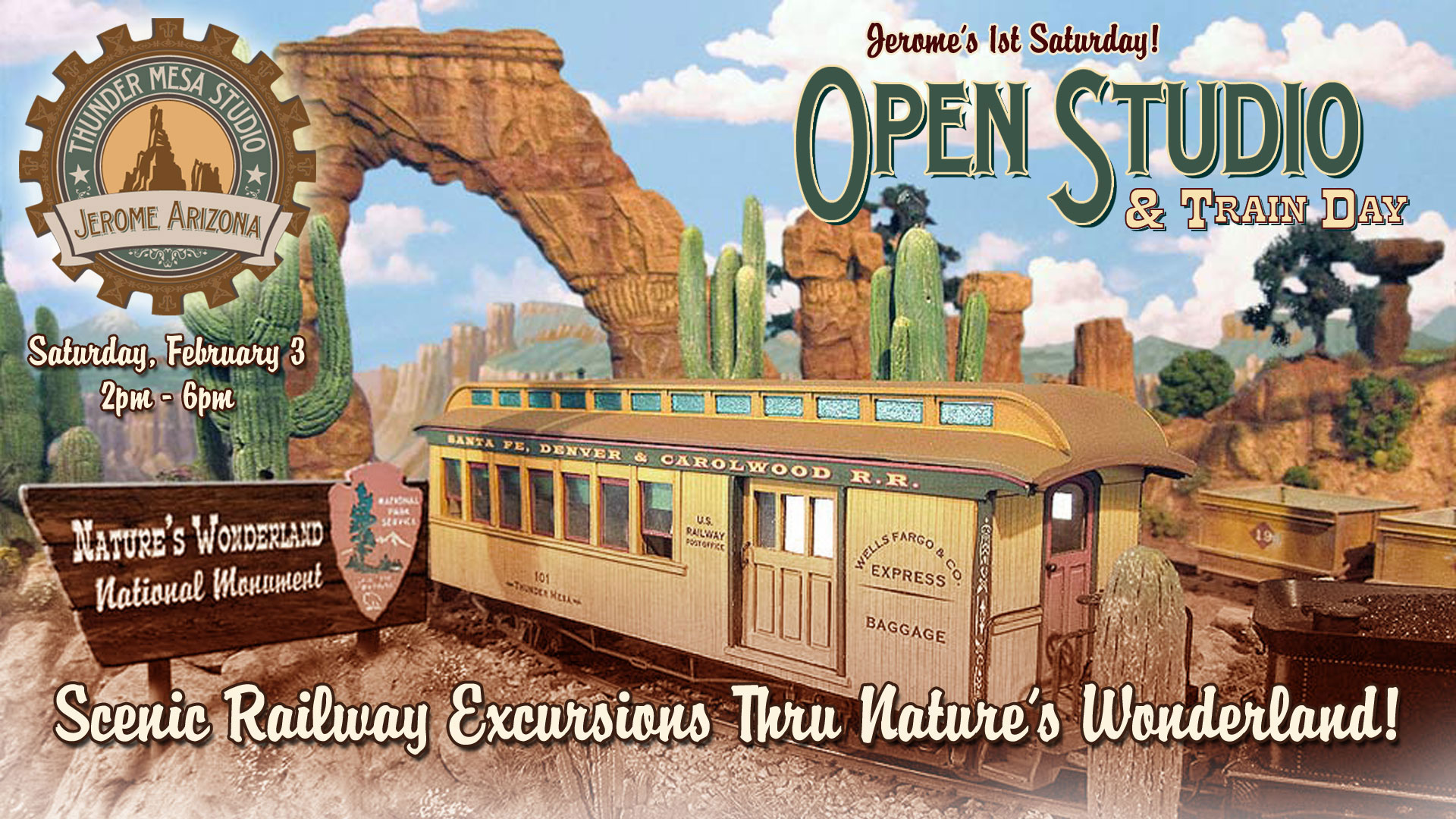 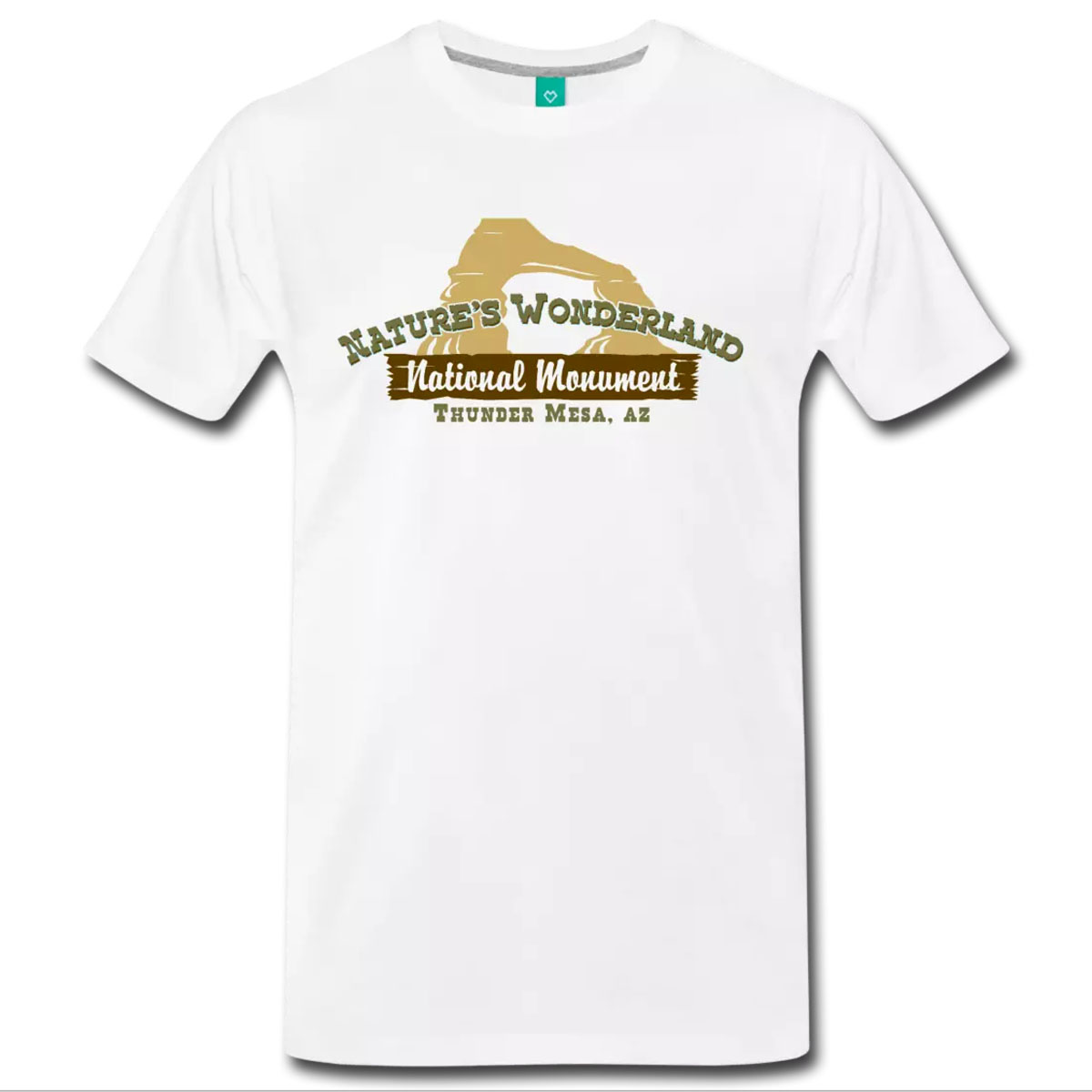 After the creation of Nature’s Wonderland National Monument in 1906, the railroad wasted little time in promoting the line to tourists back east. Here we have some early “historic” footage promoting the Thunder Mesa Mining Co. and the many scenic wonders that could be enjoyed along the line.