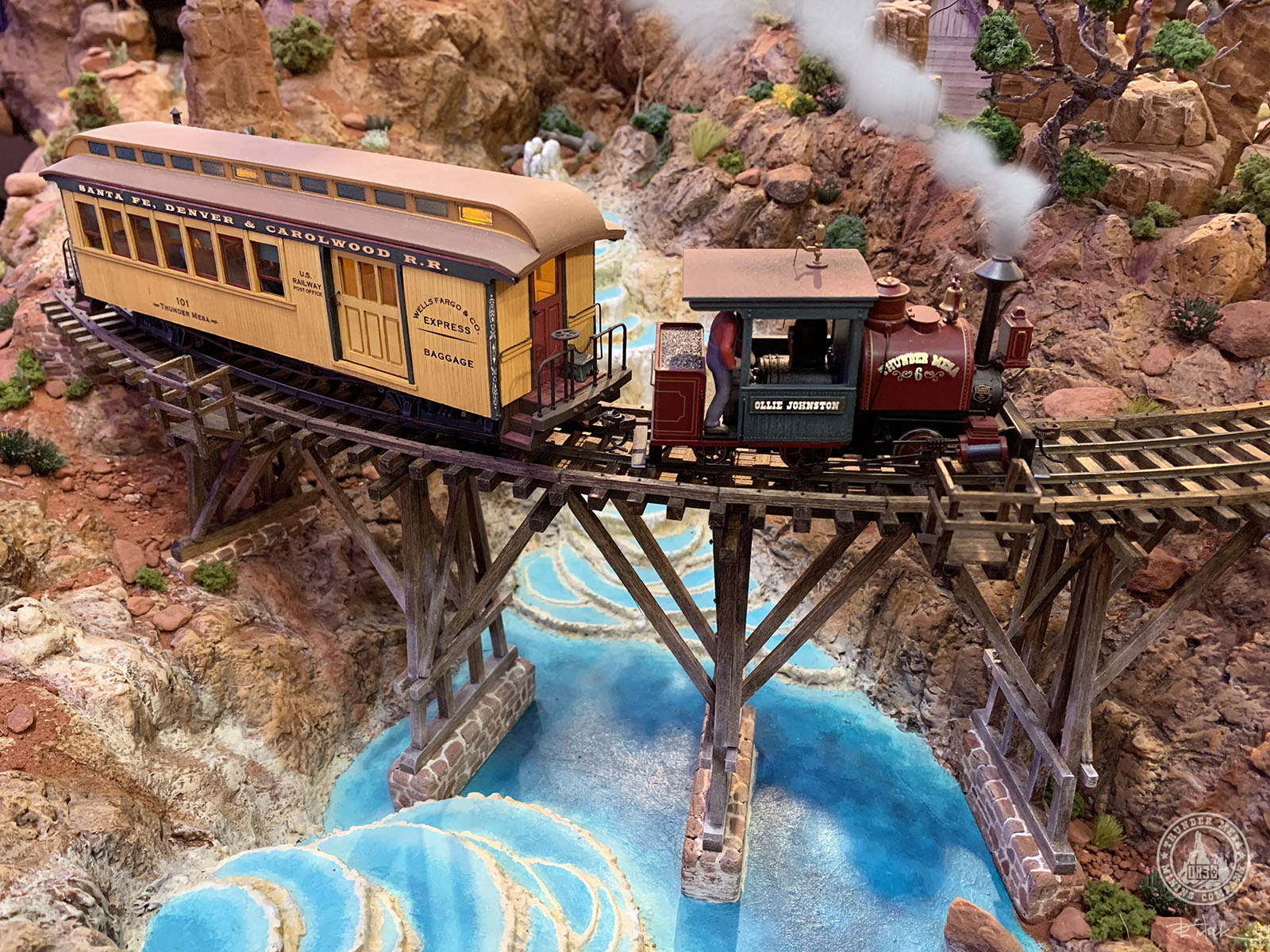 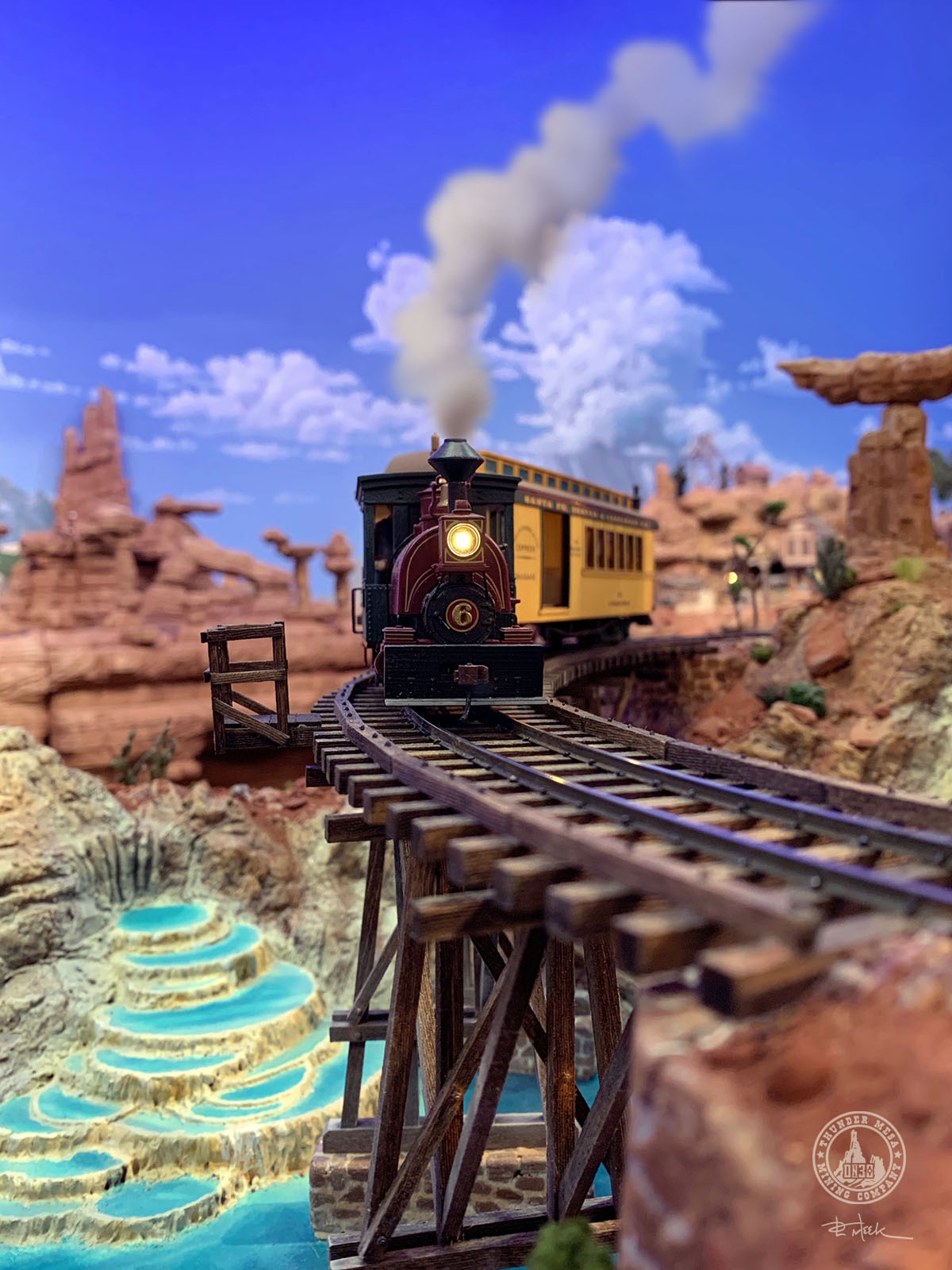 A Scene 7 Years in the Making

Way back in early 2013, I first described the area called Geyser Gulch on the original Thunder Mesa blog:

"Just after leaving Thunder Mesa, trains pass beneath majestic McKennon Arch, gateway to the Living Desert, and into an active geothermal area known locally as Geyser Gulch. The Gulch is spanned by a rickety old wooden trestle and is home to bubbling pools, multi-hued hot springs and more than a couple erupting geysers - including "Old Unfaithful," most famous of them all."

In this three part series, I'll revisit some of those old posts, and describe the planning and building of the Gulch right up to the present day. Along the way, I'll detail the planning process and techniques used to bring this scene to life.

Geyser Gulch was always planned as a signature scene on the Thunder Mesa layout, with the greatest vertical separation on the railroad; 33 inches or 132 scale feet from the bottom of the Gulch to the top of Baxter's Butte. While it has taken seven years for me to complete the scene, It didn't really need to. That's just the way it worked out, with other projects and interests cropping up and demanding attention along the way.

Follow along to see how it all came together!

Inspiration for Geyser Gulch and its deep turquoise travertine pools came from several sources, not the least of which are similar scenes at Disney parks. The original Mine Train Thru Nature's Wonderland at Disneyland had an area with erupting geysers and bubbling mud pots, including "Old Unfaithful Geyser" that would erupt and mist riders as the mine trains passed. Then there are the hot springs and erupting geysers on the Big Thunder attractions at the Magic Kingdom in Walt Disney World and Tokyo Disneyland. Grizzly River Run at Disney California Adventure has an active geyser area that the rafts pass through, and there are similar scenes along the railroad at Disneyland Paris, and at Grizzly Gulch in Hong Kong Disneyland.

Equally important is where the real world inspiration for these Imagineered scenes came from; places like Yellowstone and Grand Canyon National Parks. My Geyser Gulch scene is based mostly on Mammoth Hot Springs at Yellowstone, and the colors of Havasupai at Grand Canyon. 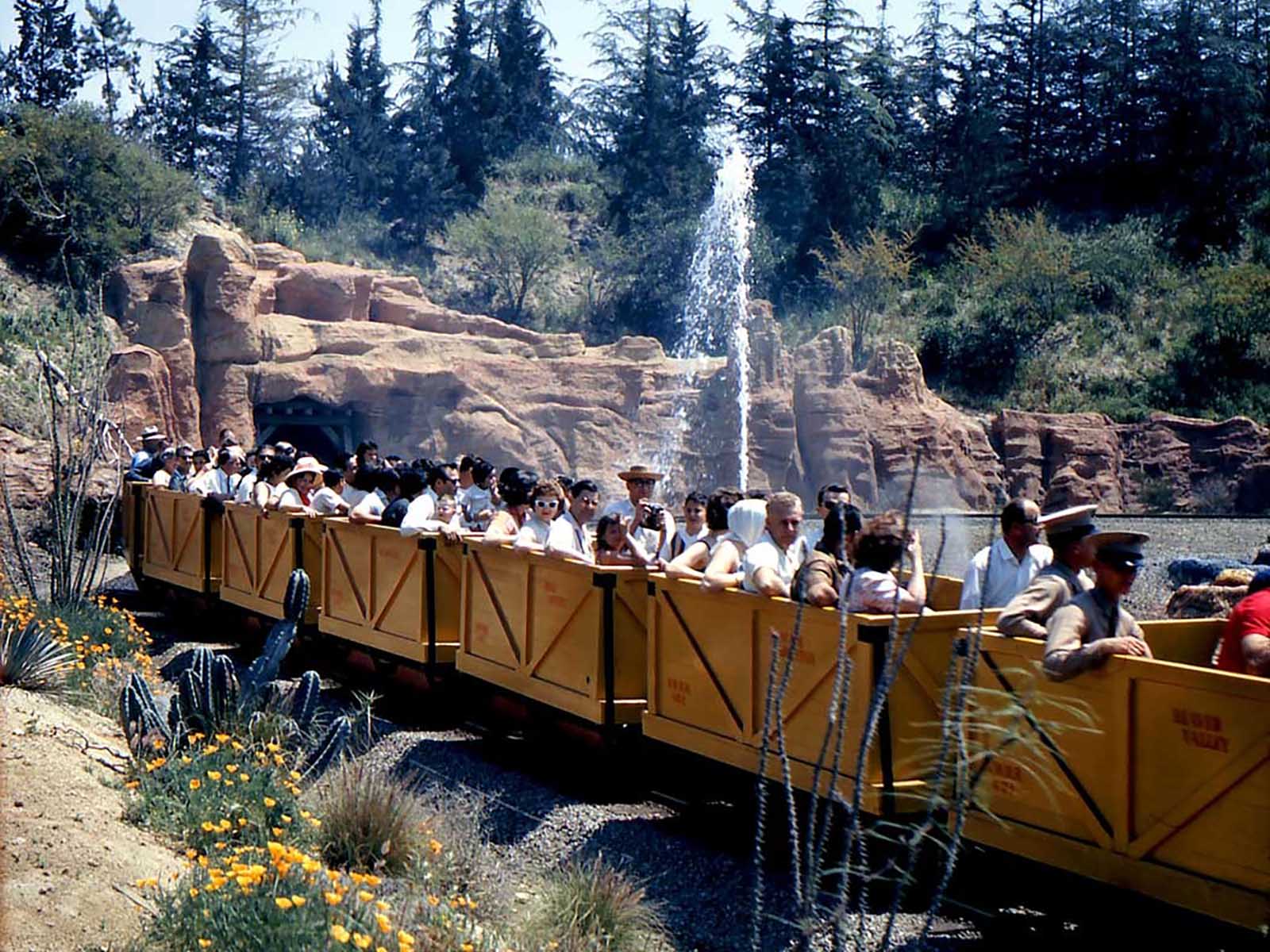 Old Unfaithful erupting on the Mine Train Thru Nature’s Wonderland at Disneyland. Circa 1960. 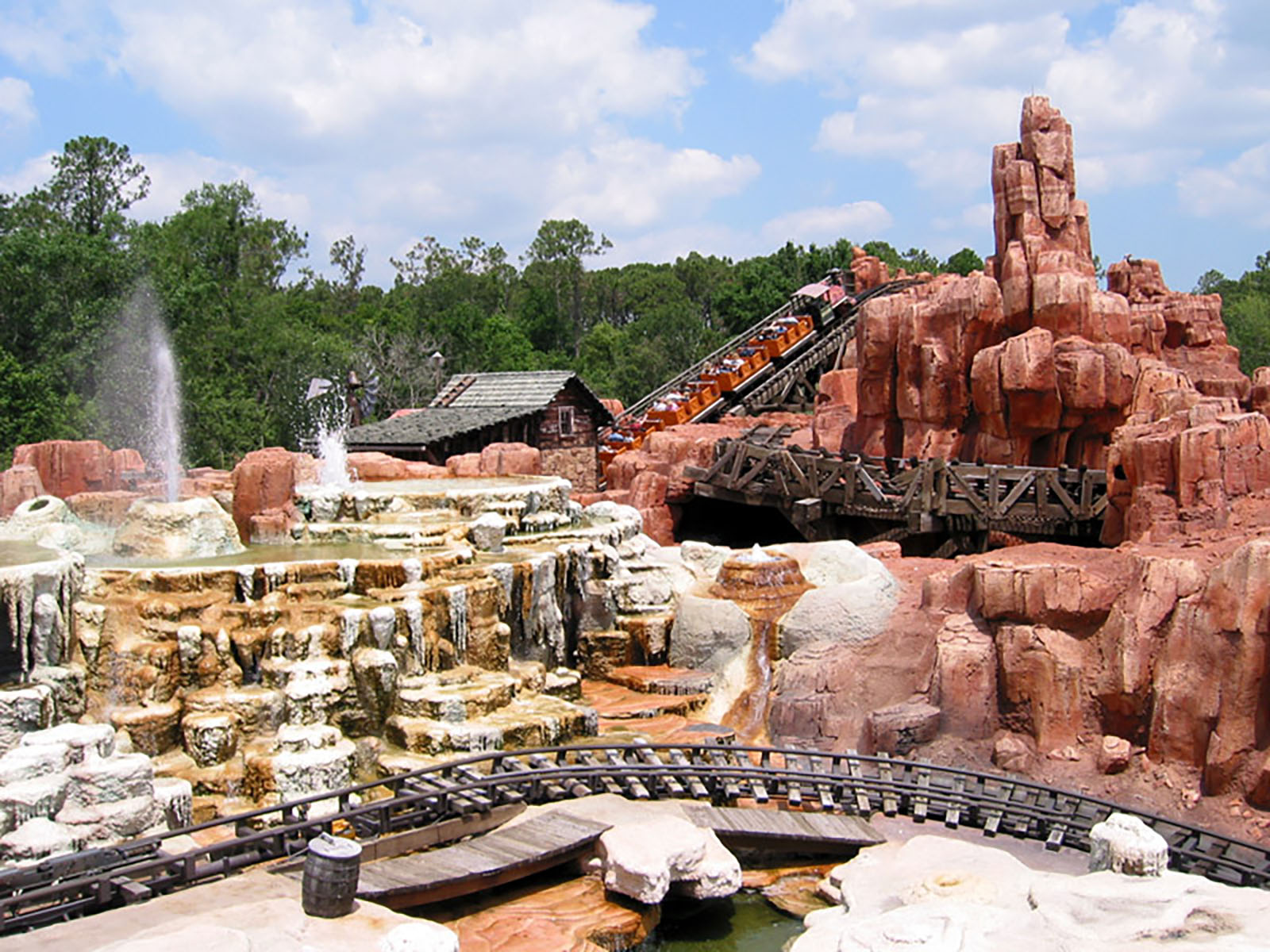 Geyser Gulch represents the essence of my modeling philosophy as it pertains to Thunder Mesa: Don't be boring. The truth about real railroads is that vast stretches of them are indeed boring or monotonous. If I wanted to be realistic I would focus on those mundane realities, but a strict adherence to realism has never been my goal. I want to create an immersive, wondrous world, with just enough realism salted in to make it believable. No real railroad would build their line beneath natural arches and over active geothermal areas, but this is the "Nature's Wonderland Route," so we pass from one scenic wonder to the next with all of the boring parts cut out. 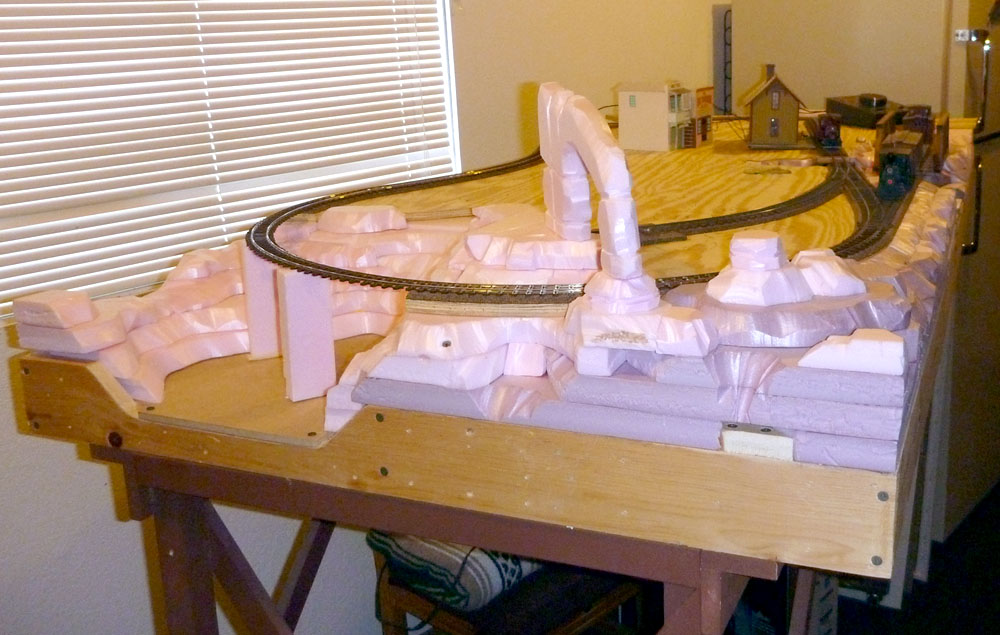 The scene occupies an inside corner of the layout with one of the sharpest curves on the entire line. Trains pass through McKennon Arch and transition to the new scene on a 15" radius curve. The scenery drops away below track level as Baxter's Butte soars high above, creating some of the most dramatic vertical separation on the railroad. But in the beginning, it was just plywood and Extruded Polystyrene Foam (EPF). 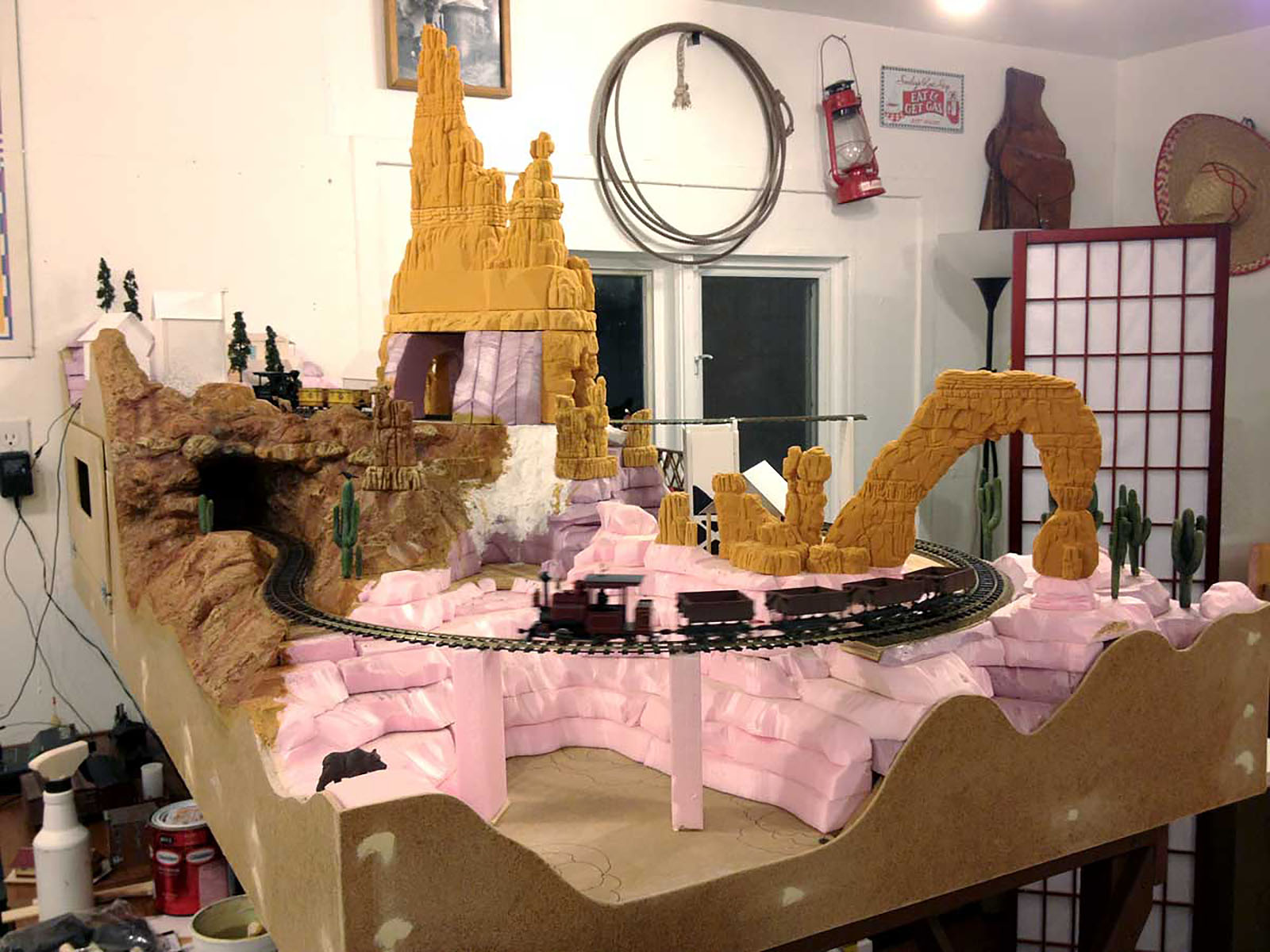 The basic shape of the Gulch was built up with 1″ pink EPF carved with a hot-wire cutting tool. 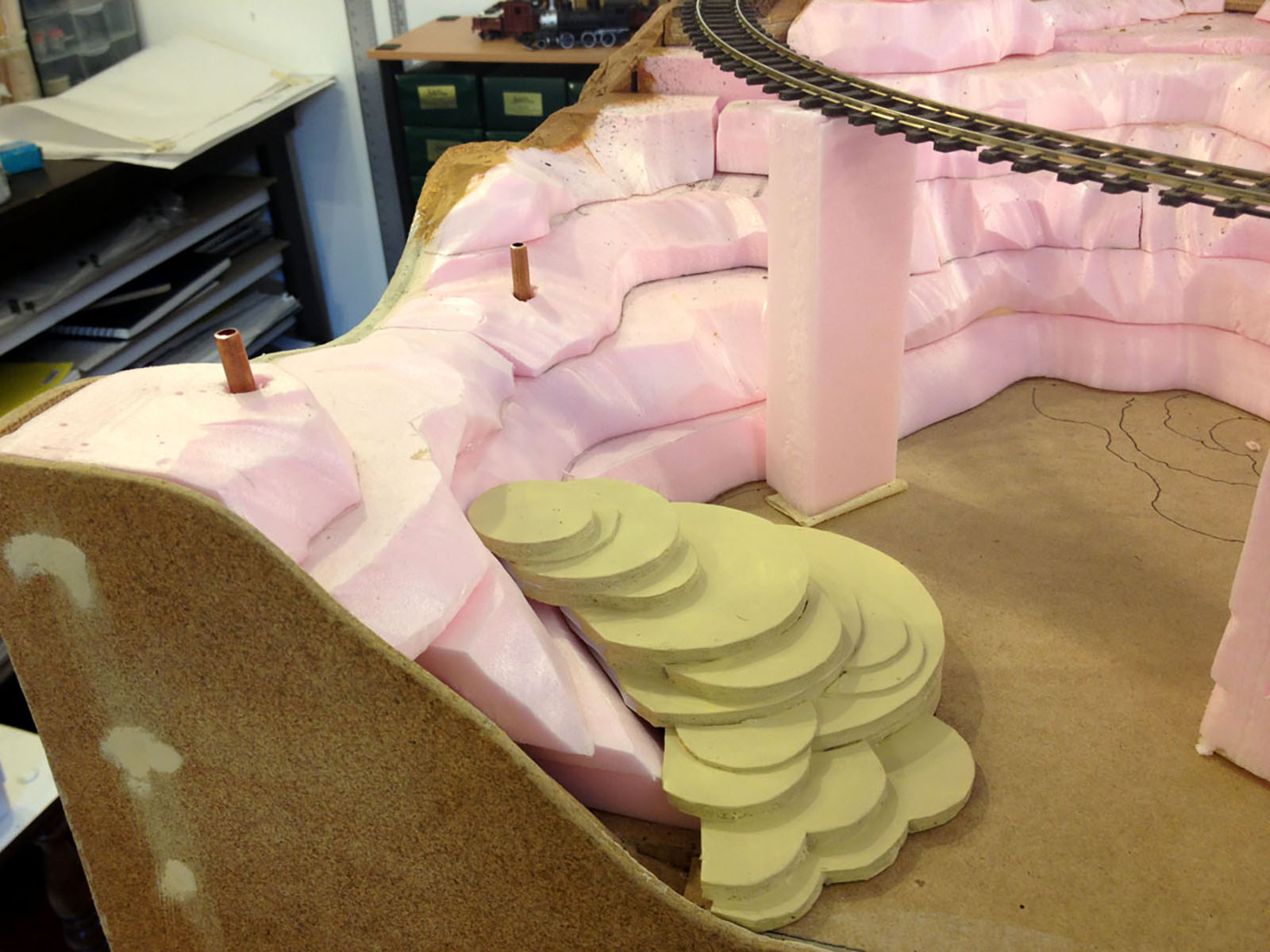 The terraced hot springs were built up with disks of foamcore, card-stock and paper, cemented into place with white glue. 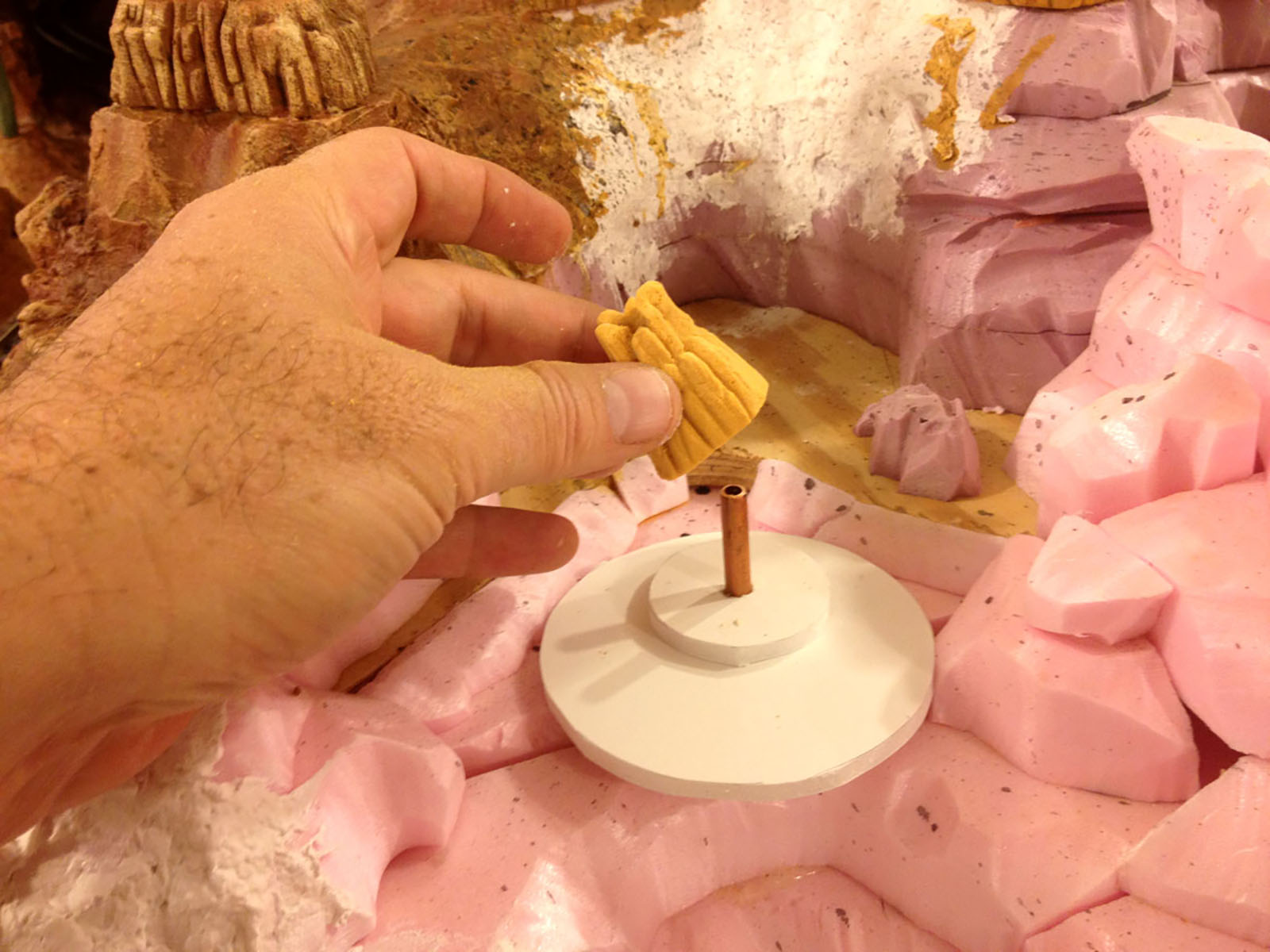 1/4″ copper tubing serves as plumbing for the geyser heads. This will connect to a mini smoke machine below the layout. “Old Unfaithful” was carved from Balsa Foam. 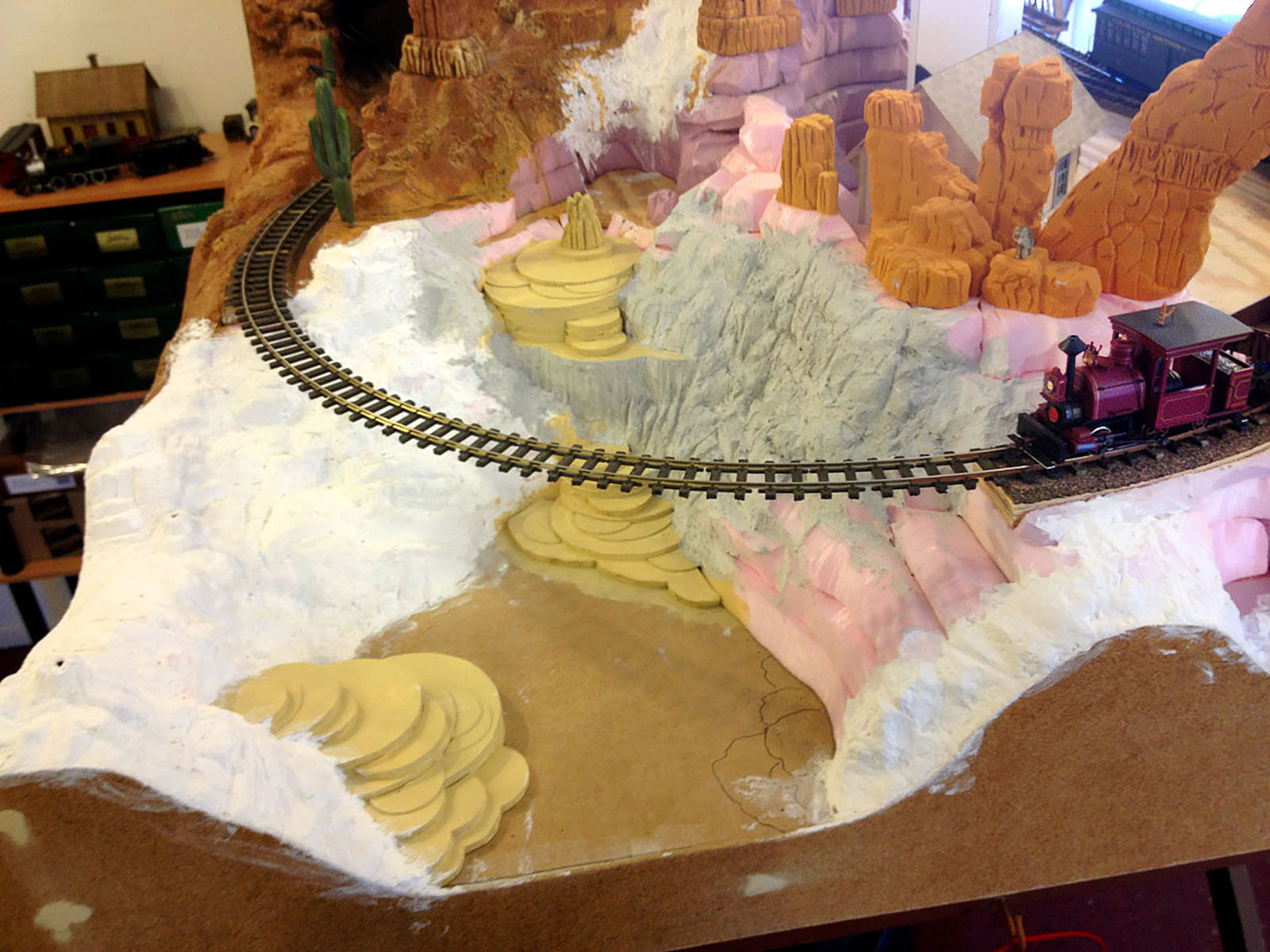 The EPF foam layers were smoothed and blended together with Sculptamold. Rock detail was carved into the Sculptamold as it set. 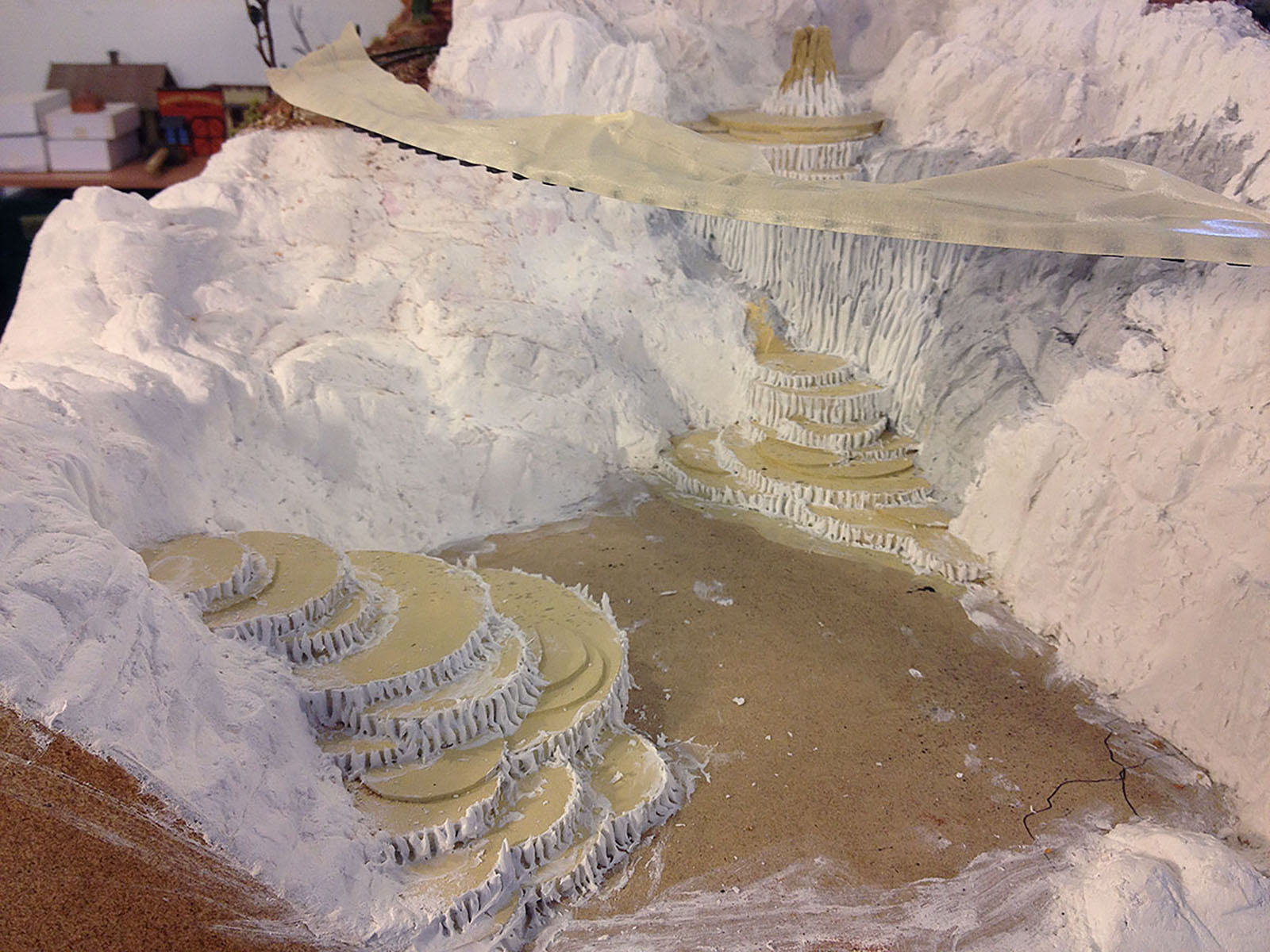 Liquitex acrylic modeling paste was used to shape and detail the edges of the travertine terraces. 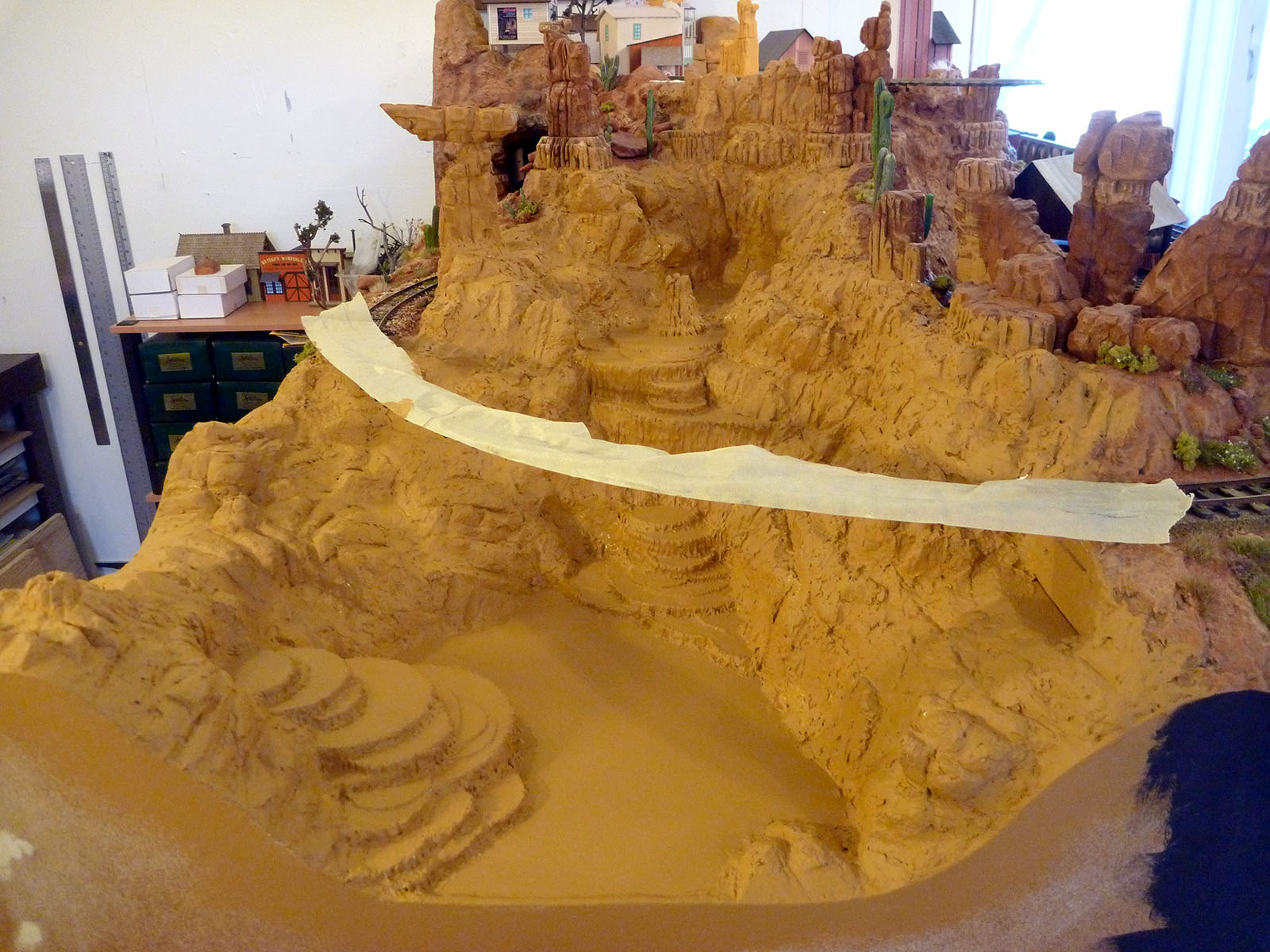 Once the Sculptamold and modeling paste was dry, the entire scene was painted with the scenic base color, Raw Sienna. I use acrylic or latex paints for this. 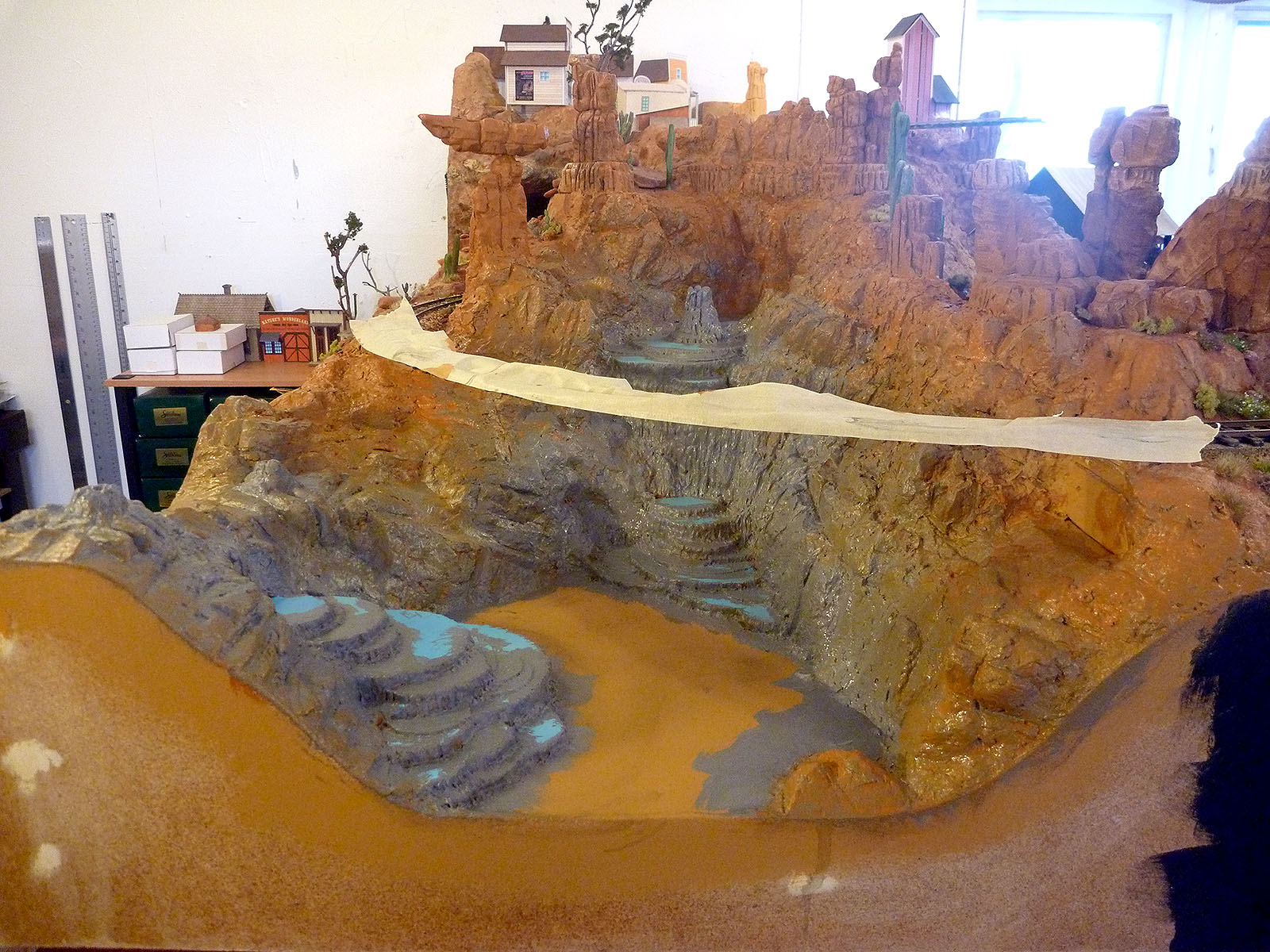 The areas around the hot springs and geysers were darkened with acrylic paint, and the first turquoise tones were added to the travertine pools. 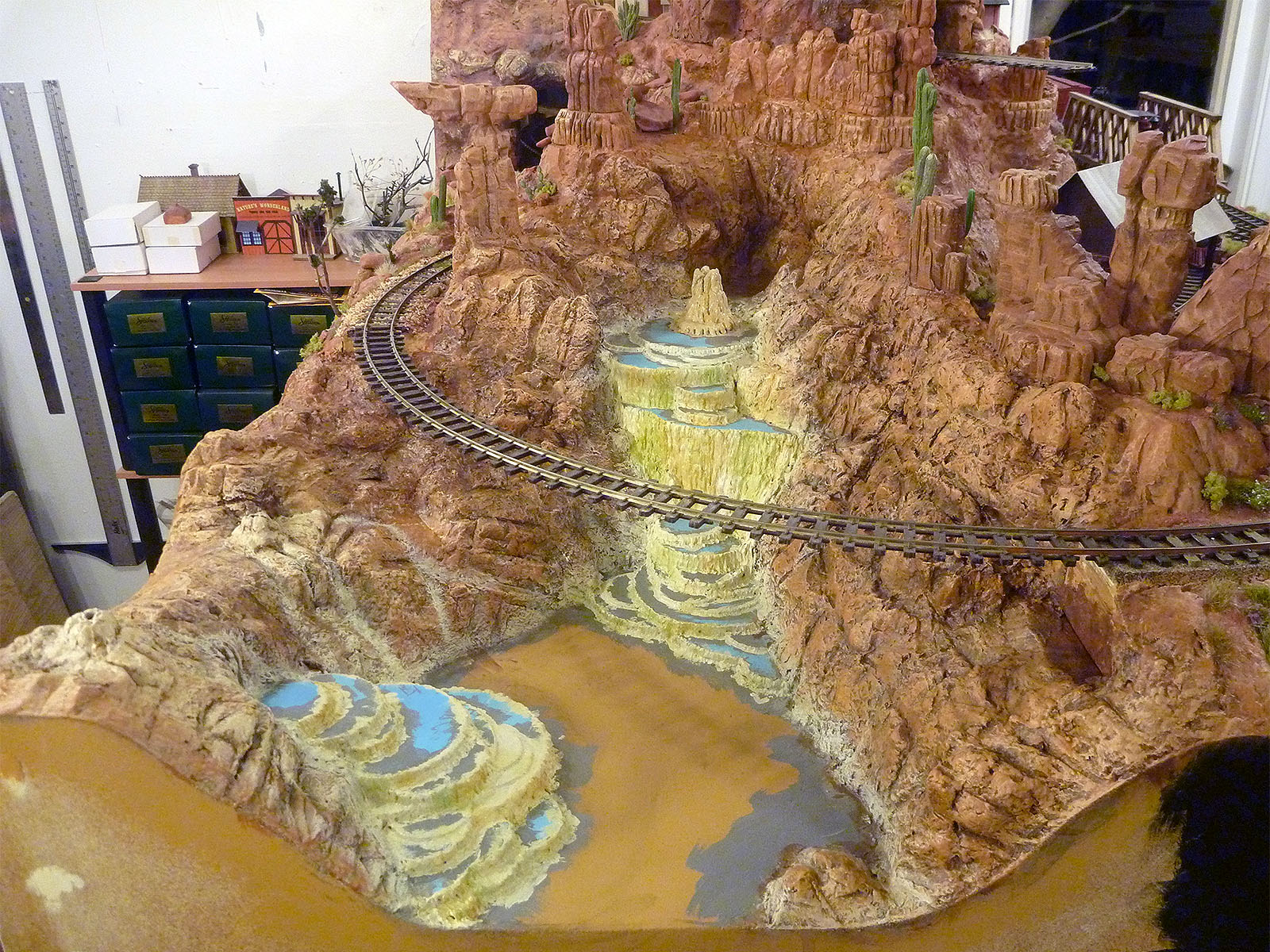 Raw Sienna, Burnt Sienna, Yellow Ochre, and Unbleached Titanium acrylics were used to finish the rock colors and create the look of years of mineral staining from the springs. 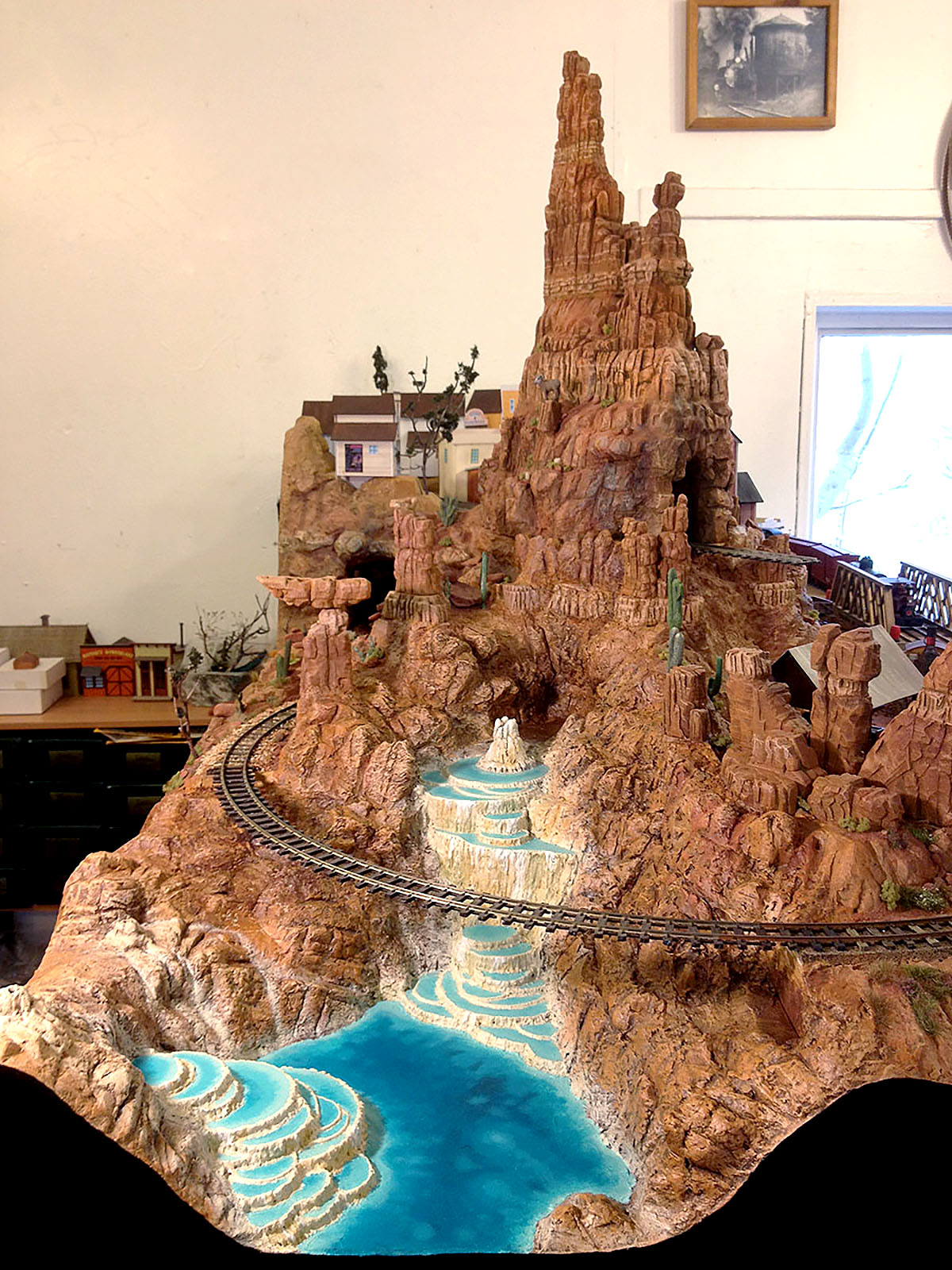 The travertine pools were painted with mixtures of turquoise acrylic paints, mixed to match the colors I have observed at Havasupai in Grand Canyon and other locations around the Southwest. Colors were blended together in place with a soft brush to give the look of churning and bubbling springs.

At this stage, progress on the Gulch was delayed for several years as work, many other projects, and an eventual move of the entire layout to my new studio in Jerome kept the project simmering on the back burner. Recently, work on the Gulch has resumed, and in part 2 of this series, I'll dive into the planning and construction of Geyser Gulch Trestle. Then, in part 3, we'll finish the Gulch with liquid epoxy resin, ground-cover, plants and details, and finally see Old Unfaithful erupt!

Thanks for coming along for the ride, amigos. Adios for now!