My Undertaker's Shop tribute to Disney's Haunted Mansion is just about finished as of this writing, with just a few more small details to add. The same is true across the street at Boot Hill Graveyard, where a new picket fence and a gnarled old tree have sprouted up. This week's video log goes into detail on the "illusioneering" and special effects at the Undertaker's Shop, and shows how I built the "Lantern Tree" in the graveyard from twisted picture wire and acrylic modeling paste. I'm pleased with how these scenes have turned out and quite happy to have them done in advance of next Saturday's Open Studio & Train Night. 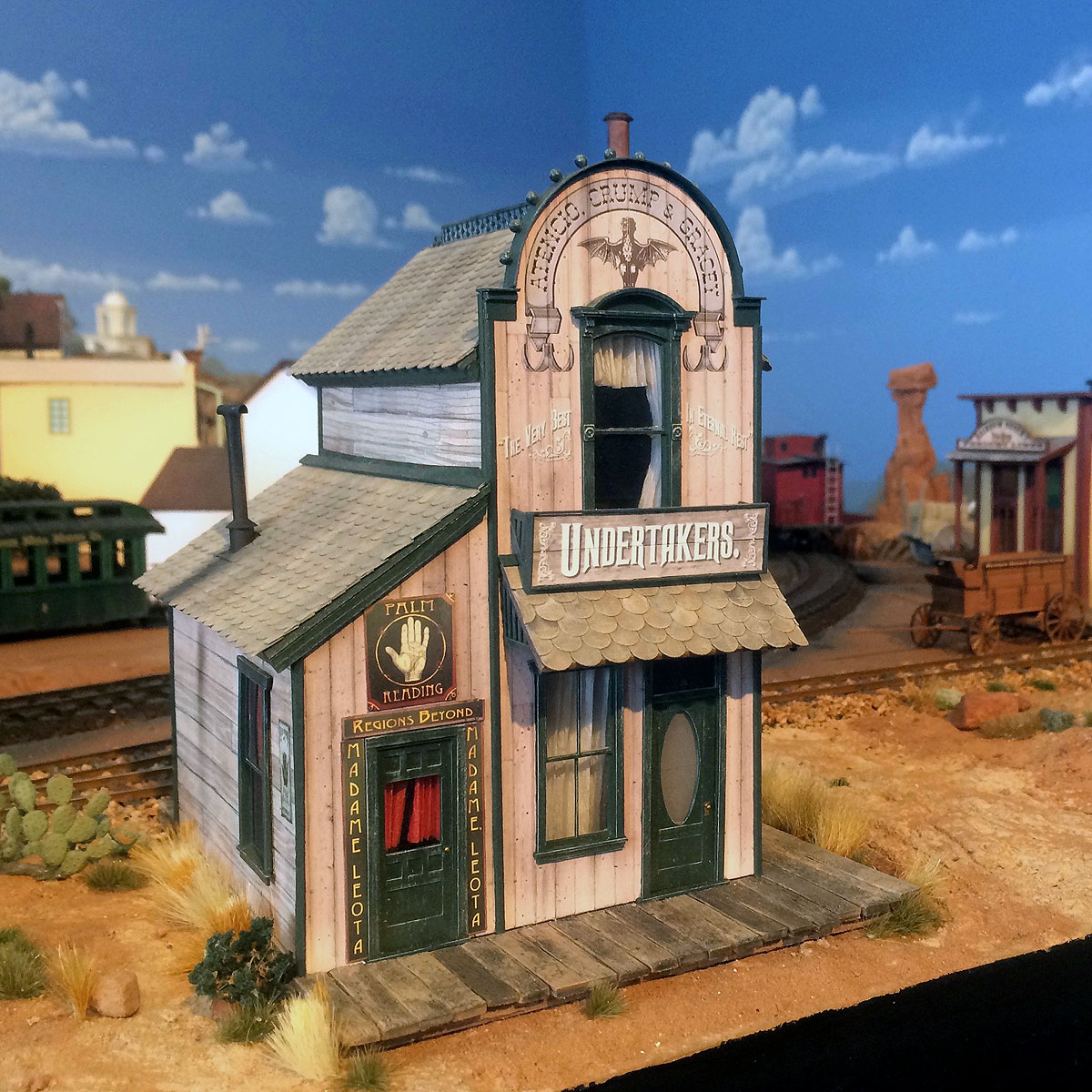 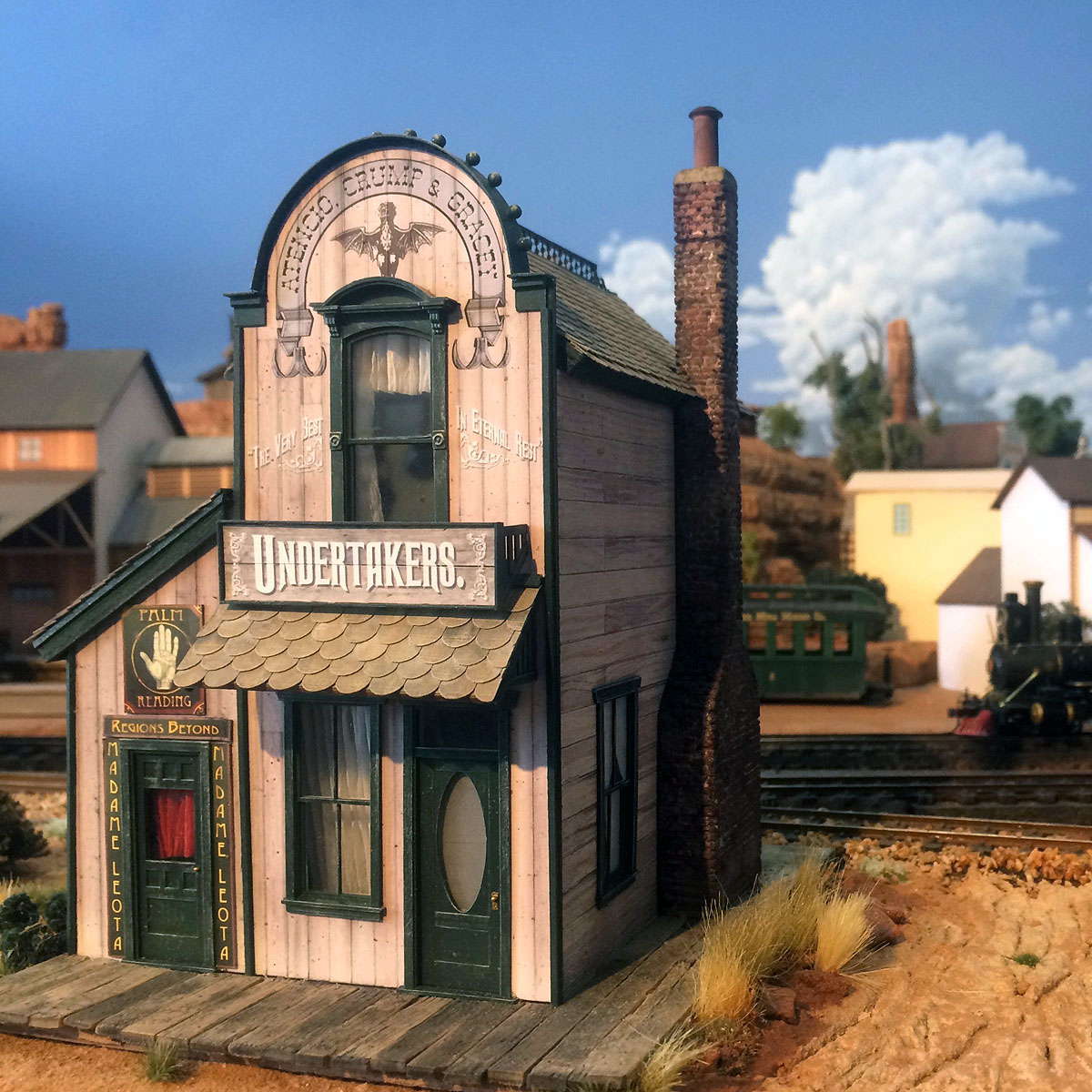 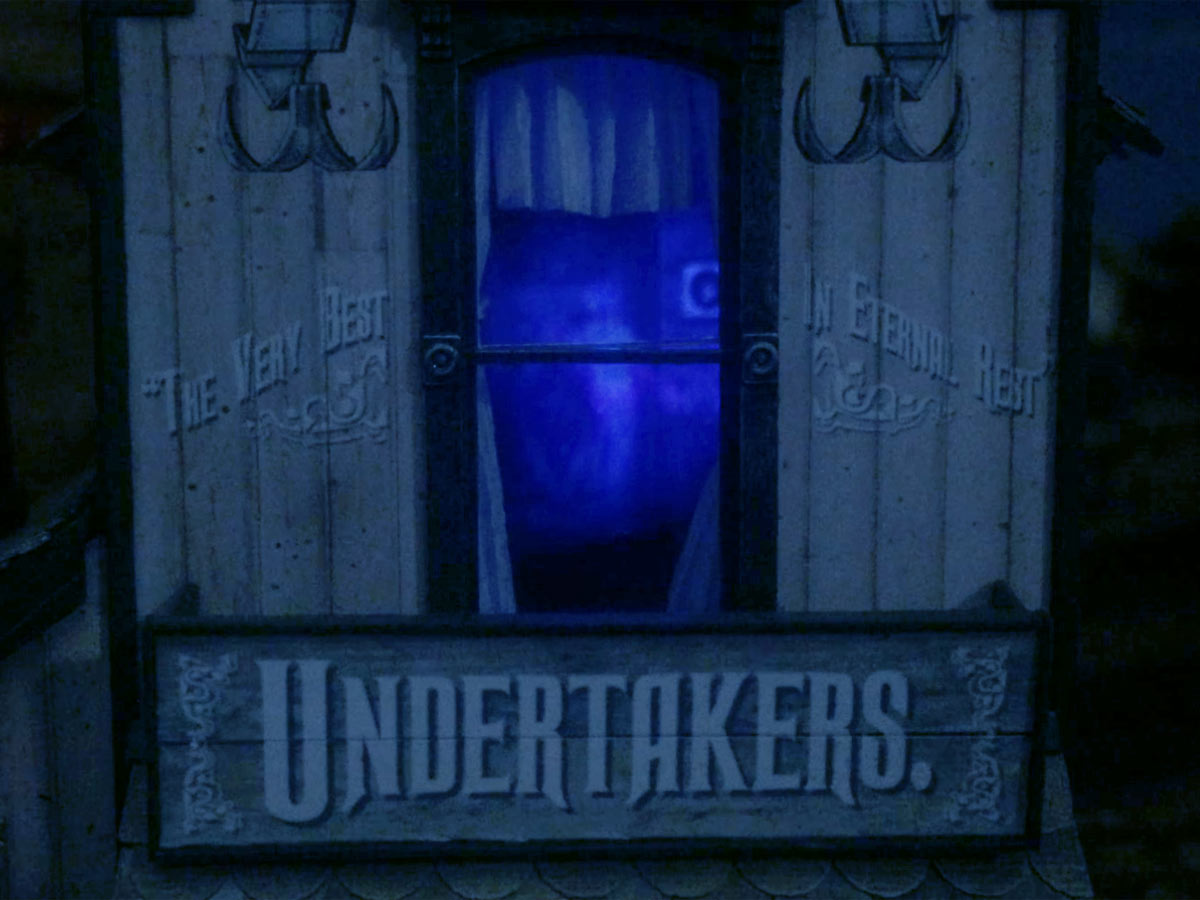 The Undertaker's Parlor of Messrs. Atencio, Crump and Gracey has been installed in its plot near the front edge of the layout. A follower of the TMMC Facebook page suggested that I rotate the structure 90º to give guests a better view of the interior effects and that turned out to be an excellent suggestion. Thanks for that! Below decks, an ITT Products sound module with a 2", 8 ohm speaker plays a spooky 2-minute soundtrack that I created. George at ITT products was very helpful when creating this custom sound module and I highly recommend his products. Both the soundtrack and the interior Pepper's Ghost effect are activated by one of the "Big Red Buttons" that guests can push on the layout fascia. There's much more on the Pepper's Ghost effect in this week's Thunder Mesa video log.

Check out the video below for part 2 of the time-lapse Undertaker's Shop build. 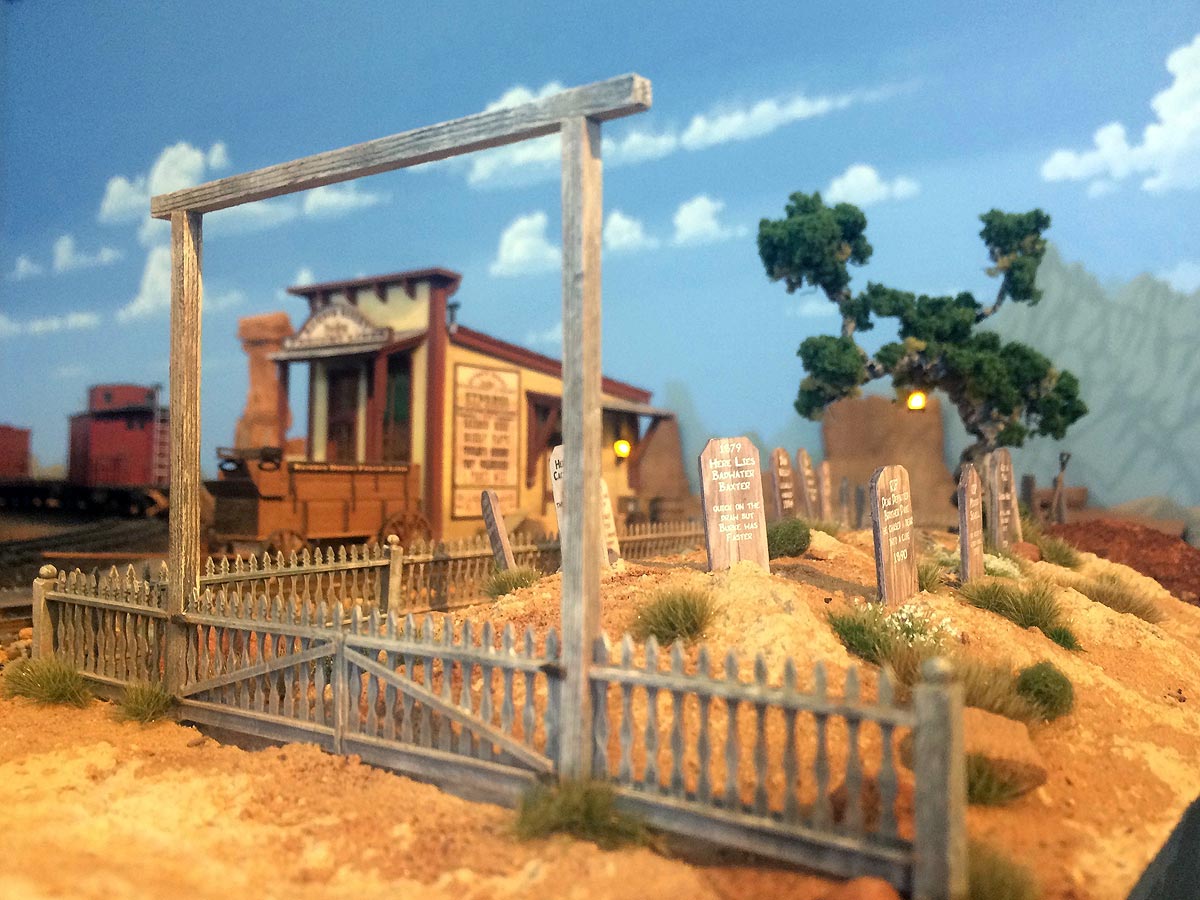 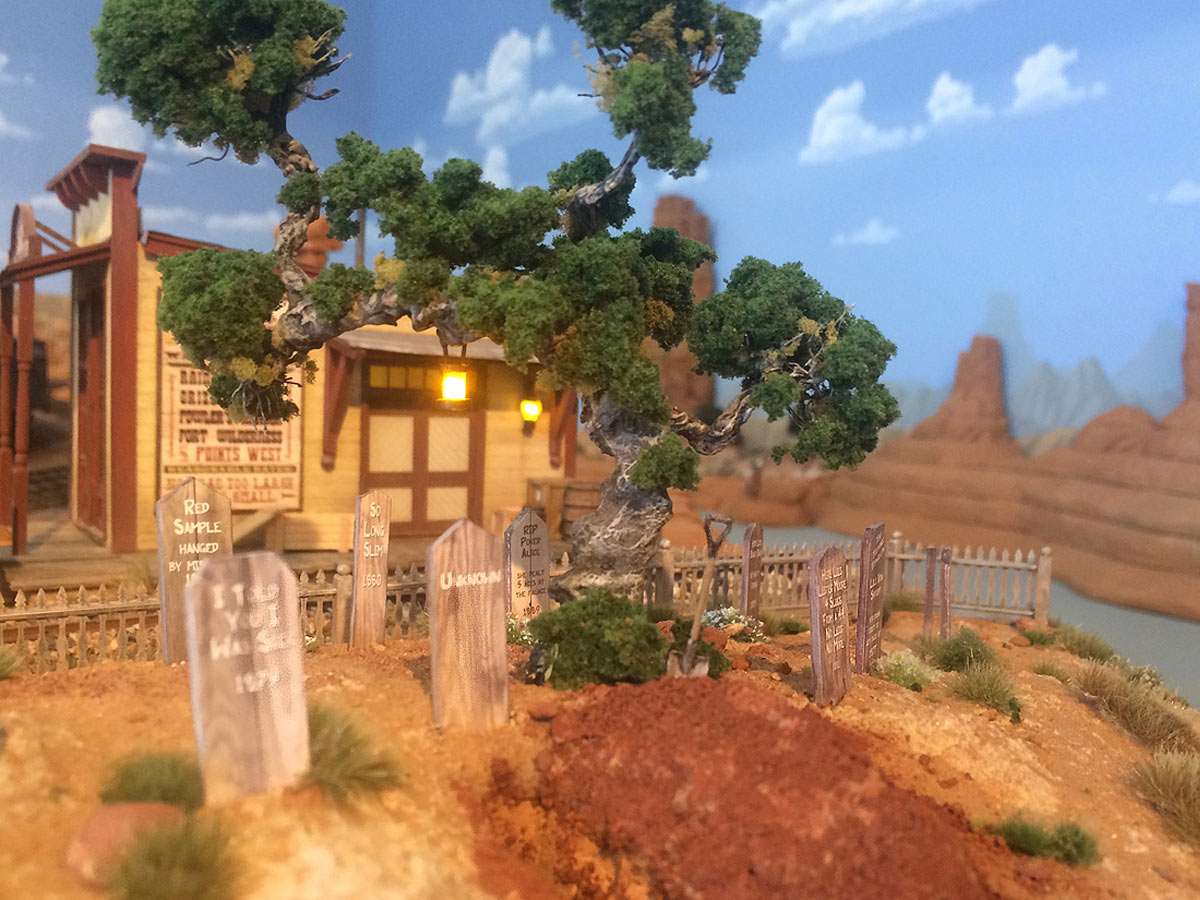 Over at Boot Hill, I've been putting the finishing touches on the scene with a weathered wooden fence and a gnarled old Juniper tree that has a flickering lantern hanging from the branches. I wanted some sort of illumination for the scene during night operations and this seemed like a fun and clever option.

The picket fence was built from Grandt Line castings with scratch-built wooden posts between them. The knobs on top of the fenceposts are dress-pin heads. The fence was assembled in three large sections at the workbench where it was primed and painted before being installed in the scene. I primed it with Krylon flat grey before drybrushing on splotchy coats of light tan and white acrylics to simulate weathered and faded paint on a wooden fence. I still need to add the iconic "Boot Hill" sign to the crossbar above the gate.

I built the tree using braided picture-hanging wire, twisting several strands together to create the trunk and then unraveling the ends to simulate smaller branches and twigs. Some some scrap-box bits were glued to a 3mm yellow flickering LED to make a lantern, and then the soldered on leads were hidden within the tree's armature.  All of this was then coated with three or four applications of acrylic modeling paste to build up texture, taking care not to cover the lantern itself. I let the paste dry overnight before finishing the trunk with a dark brown primer, followed by several dry-brushings with lighter shades of tan and grey acrylics. The tree was then installed on the layout and Woodland Scenics dark green foliage clumps were cemented on with Aleene's Tacky Glue. You can see a time-lapse of the tree being built in this week's video log. 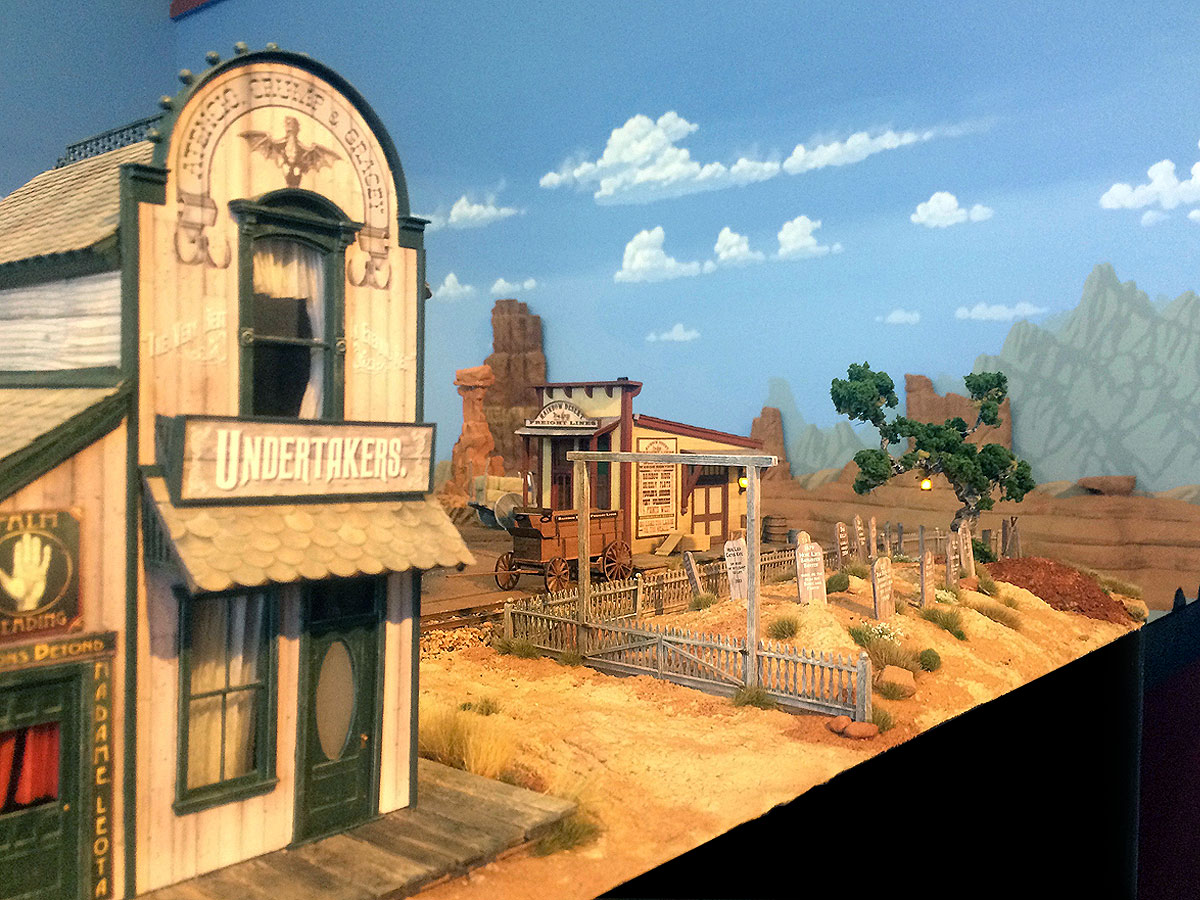 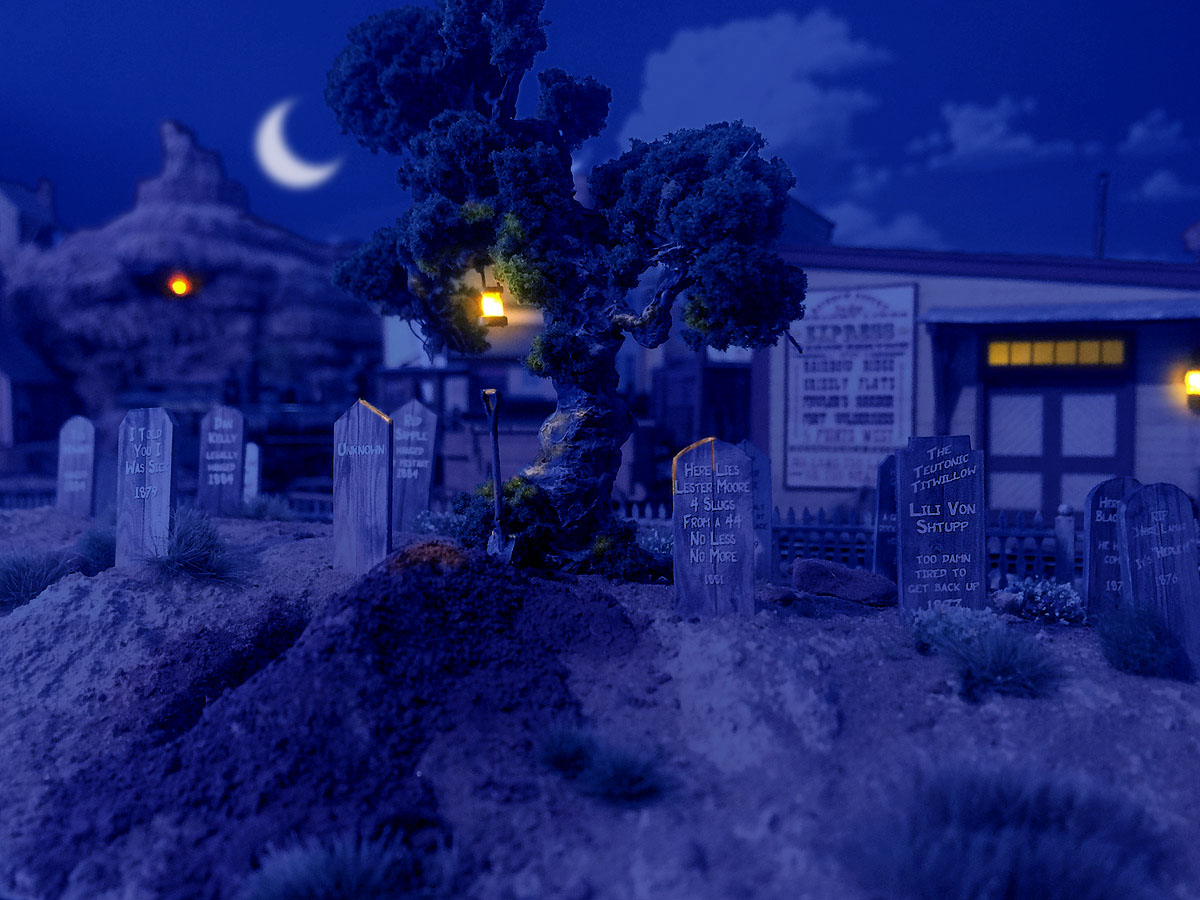 I'm pretty pleased overall with how the entire scene has come together. As usual, it turned out to be a little more complex than I had originally planned as additional effects and details were added, but I'm very happy to have it (mostly) done in time for the Halloween season!

I'm not quite sure which project I'll be tackling next. There are a few more lighting effects I'd like to finish up before next weekend, but I'm also more than ready to get back to work on the Thunder Mesa Riverfront and its 50' paddle-wheel steamer. Right now, it's time to clean up the studio and get organized again after the last two weeks of frenzied modeling. Thanks for checking in, amigos. Adios for now!

PS: As a bonus for following along, I'm offering the ambient night sounds of Thunder Mesa and the Haunted Undertaker's Shop soundtrack as free Mp3 downloads. I created both of these tracks for the layout and they can be downloaded and played on any MP3 capable devise. Add a little nighttime atmosphere to your own layout or a spooky Halloween soundtrack. Have fun! 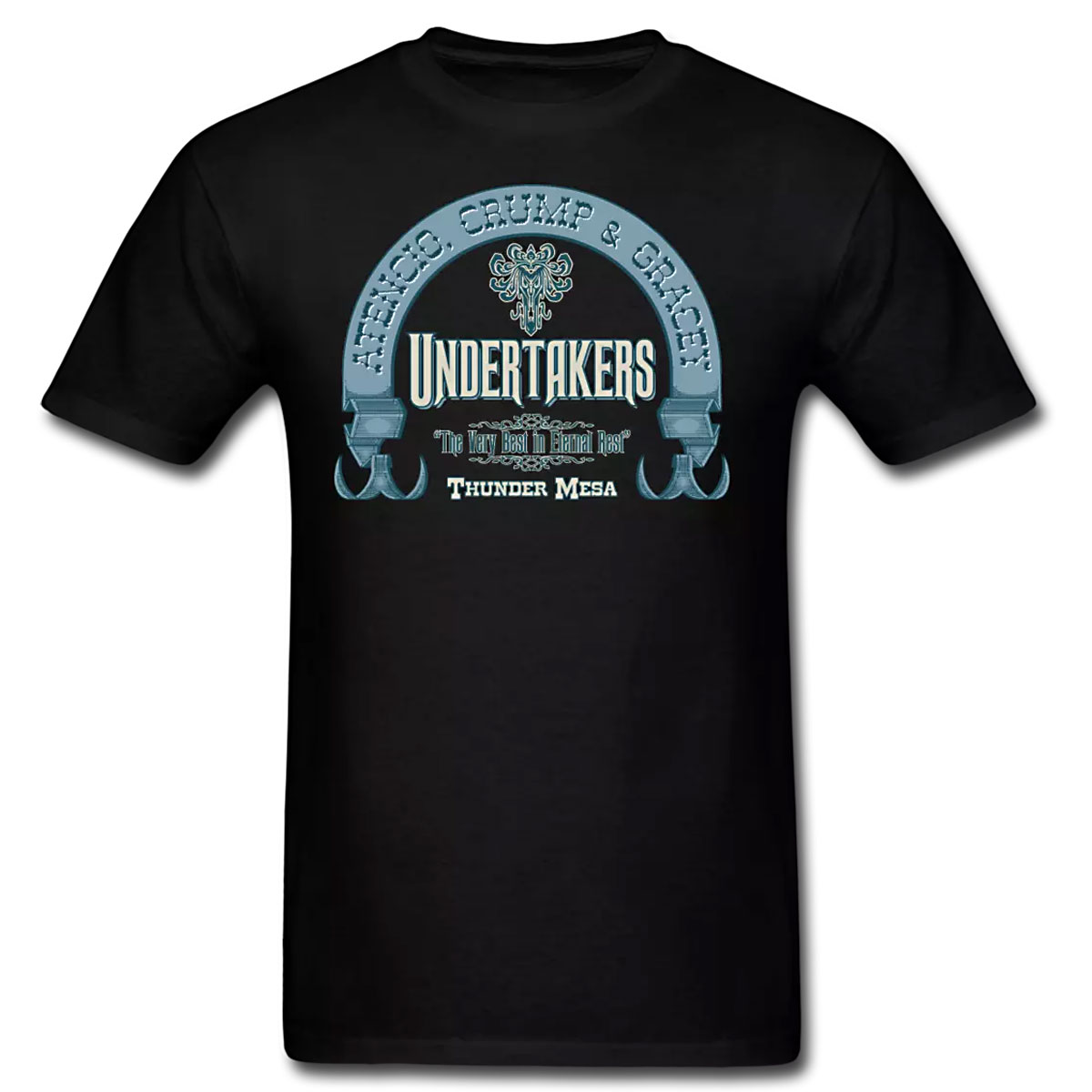 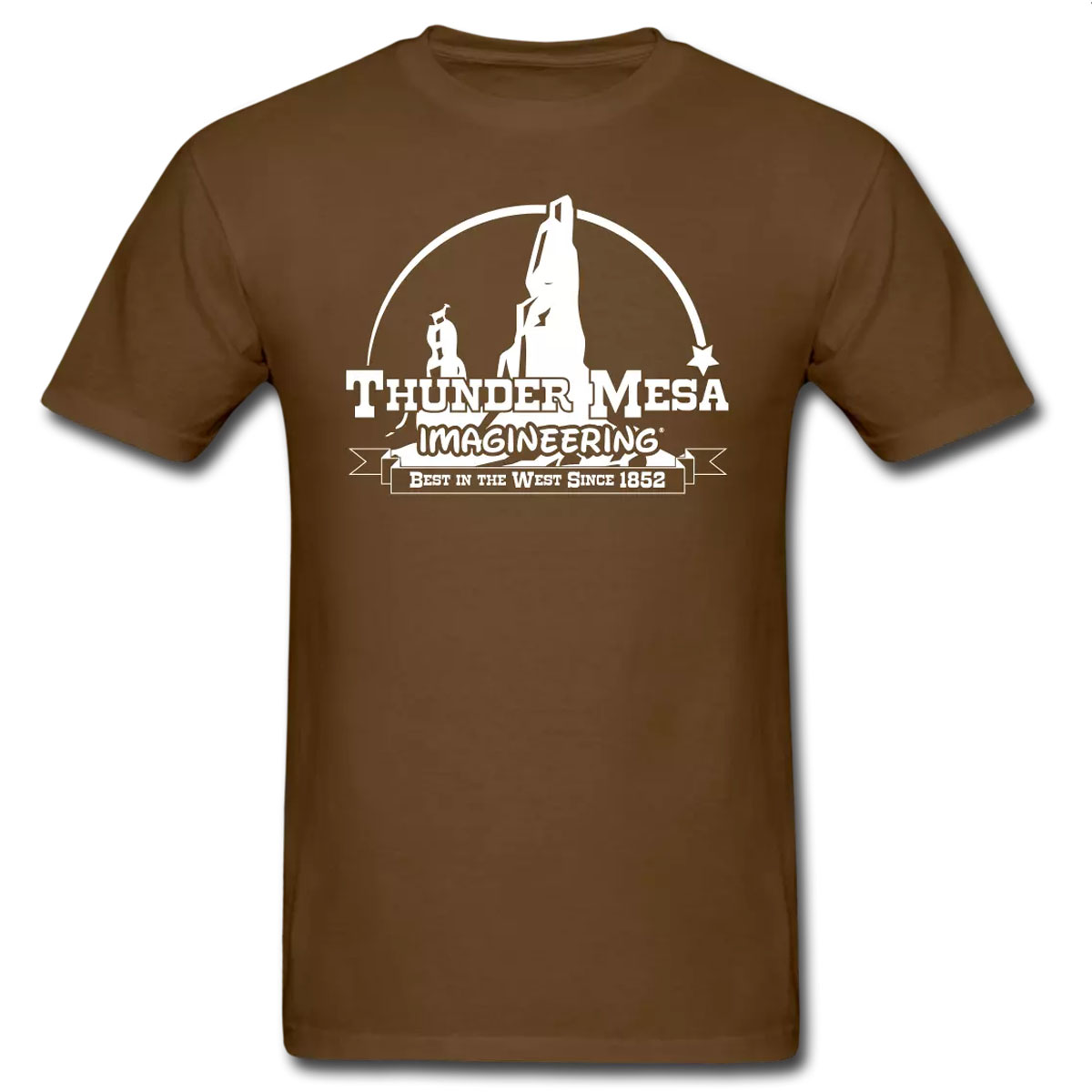 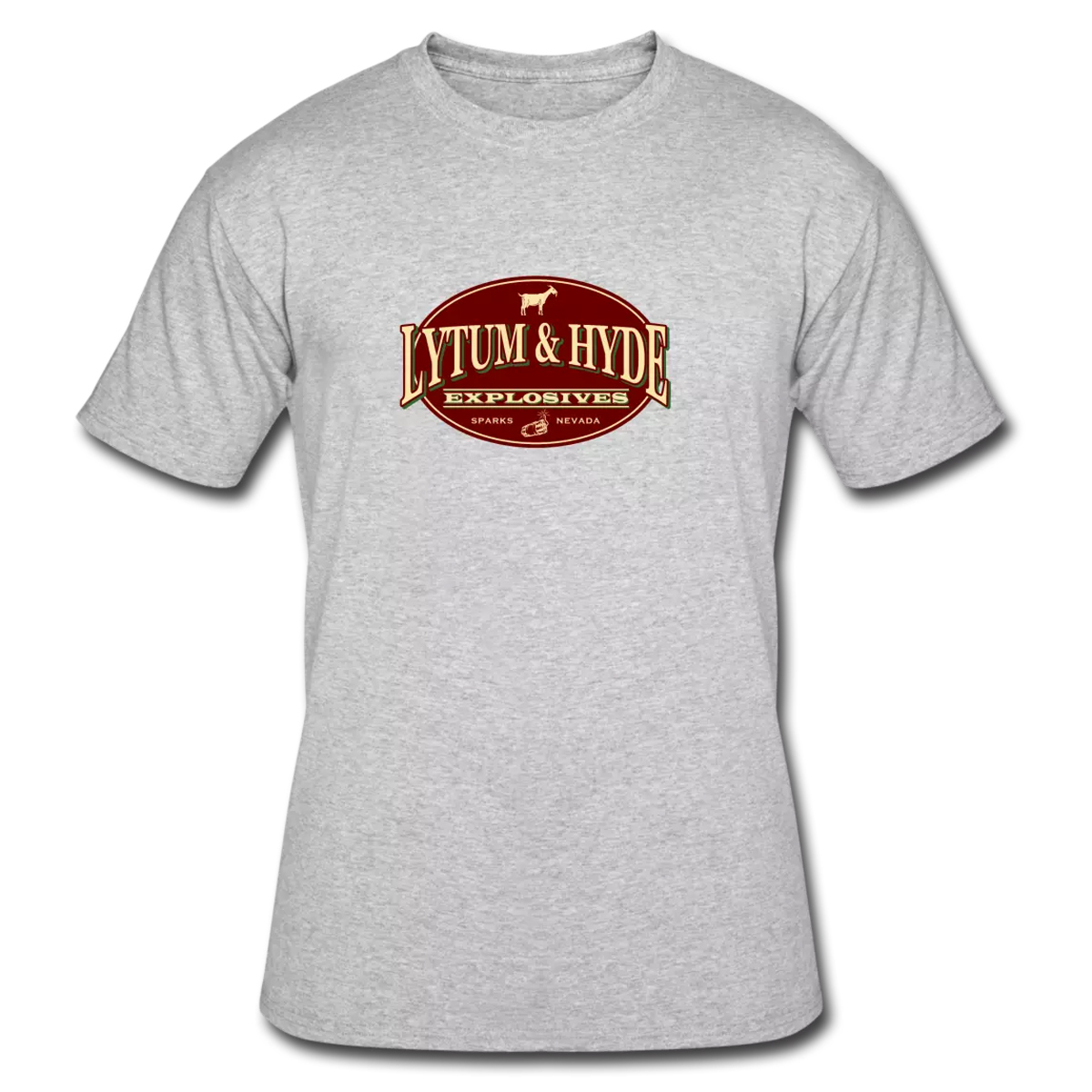 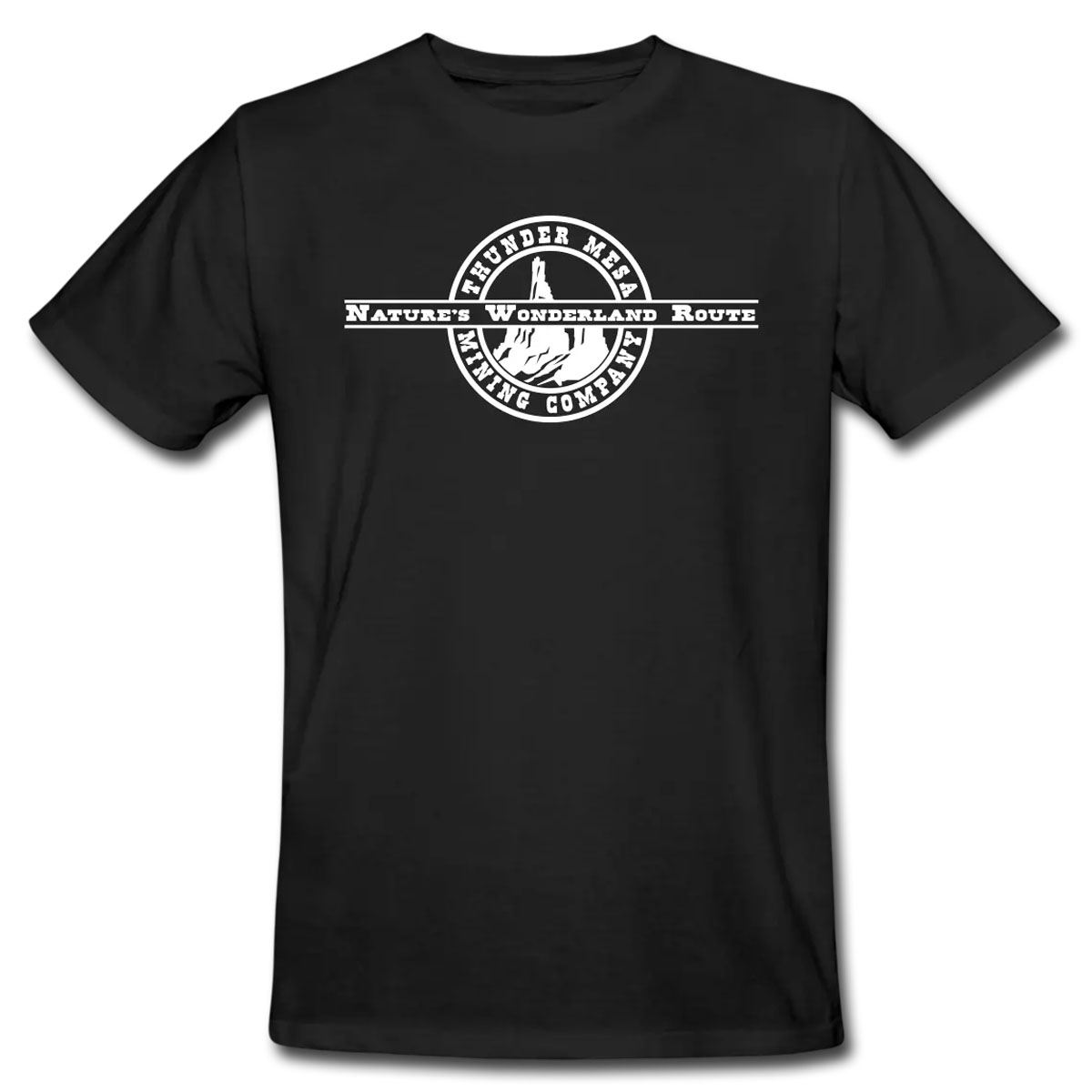