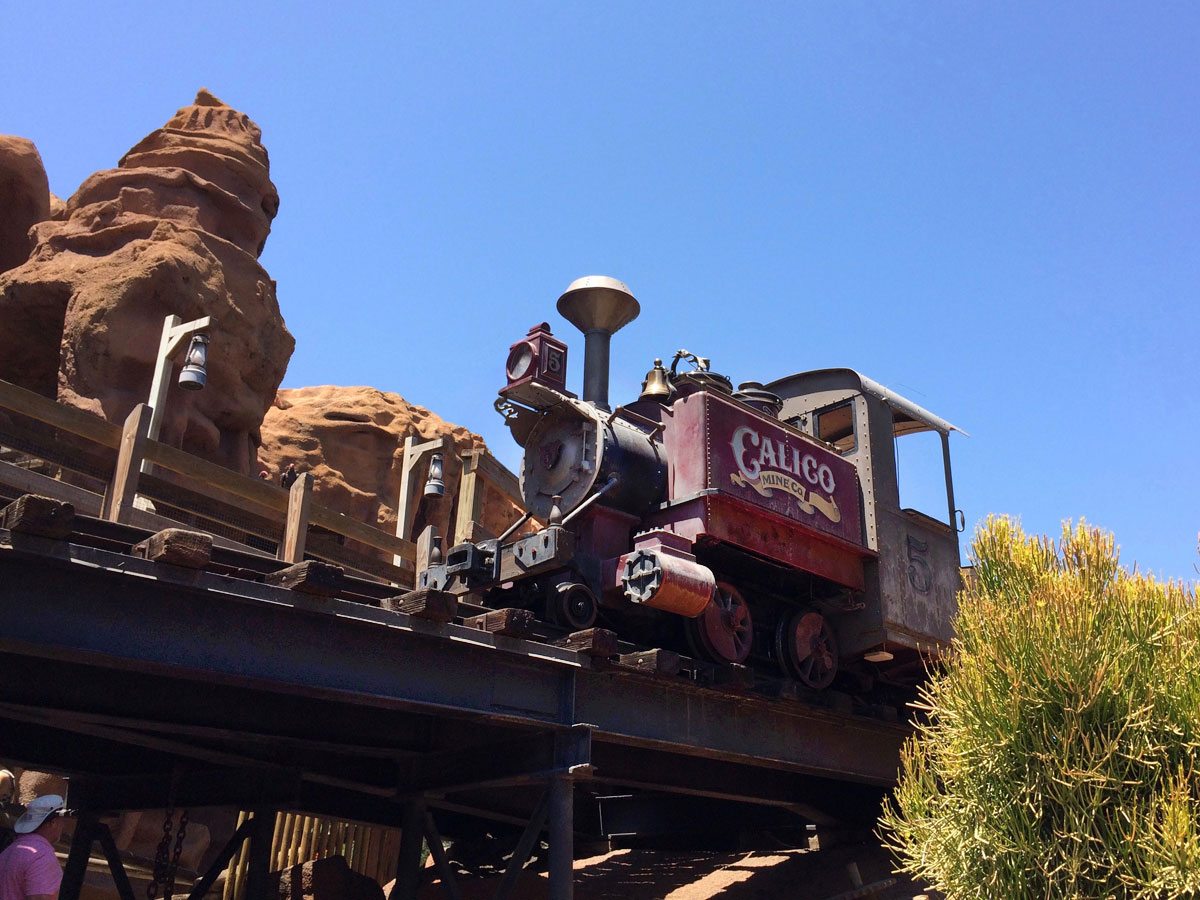 It's been a busy week life-wise since the last update so I haven't had too much time to work on the railroad. We took a family trip out to California to spend some time with friends old and new, and to revisit a few old haunts of mine, including Knott's Berry Farm and Calico Ghost Town out near Barstow. It was a fun trip that left me energized and inspired to get things done on the TMMC. Back at the studio, I took a long hard look at my plans for the Calico section and ultimately decided to change course a bit and revive earlier plans for a portable mini-layout based on Knott's Calico Mine Ride. 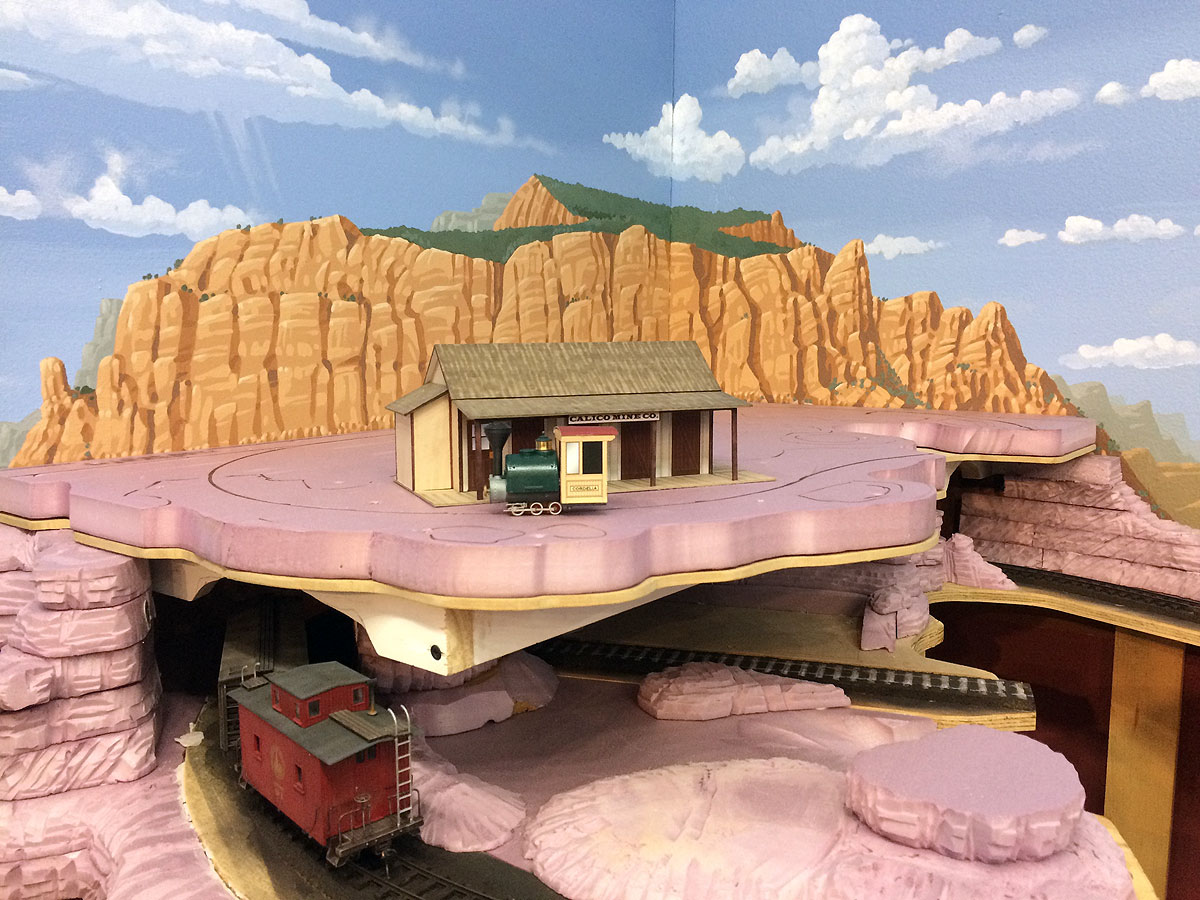 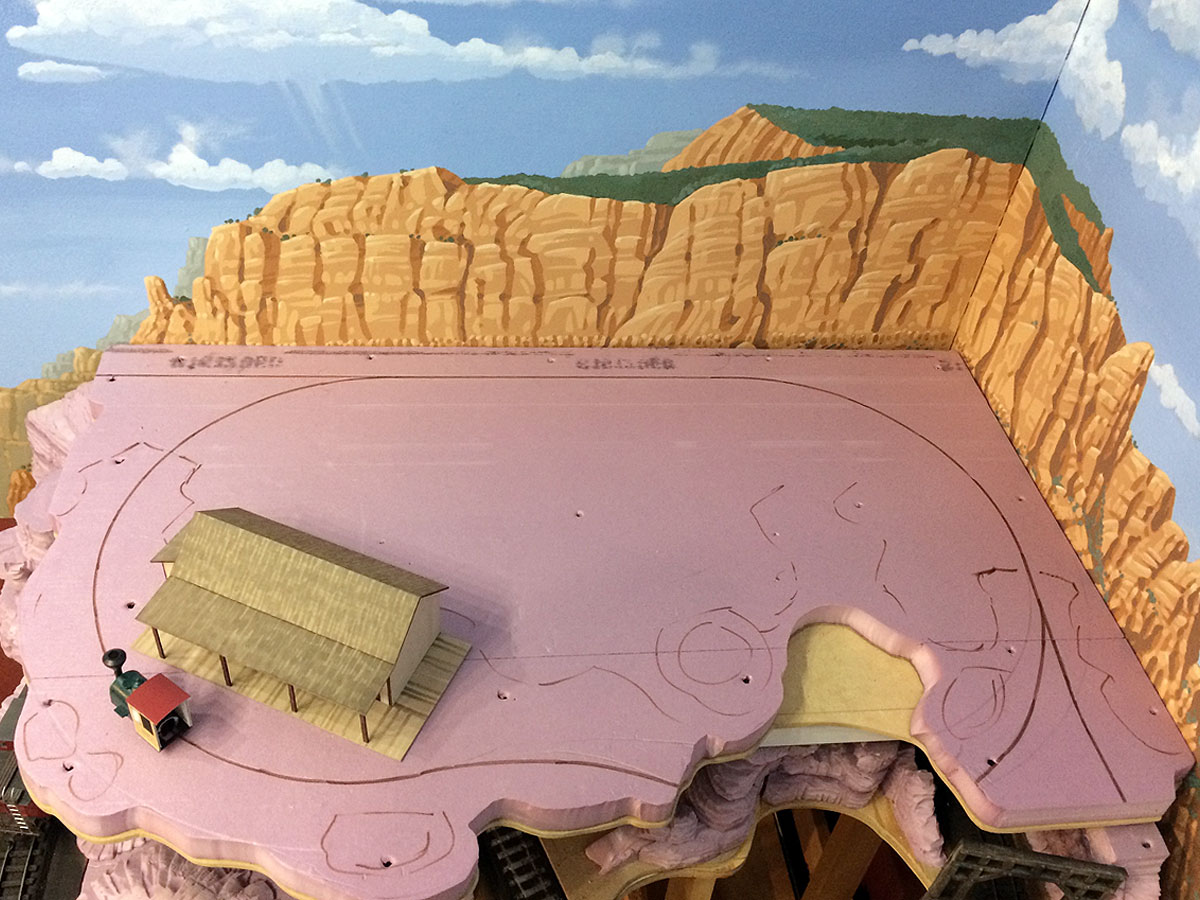 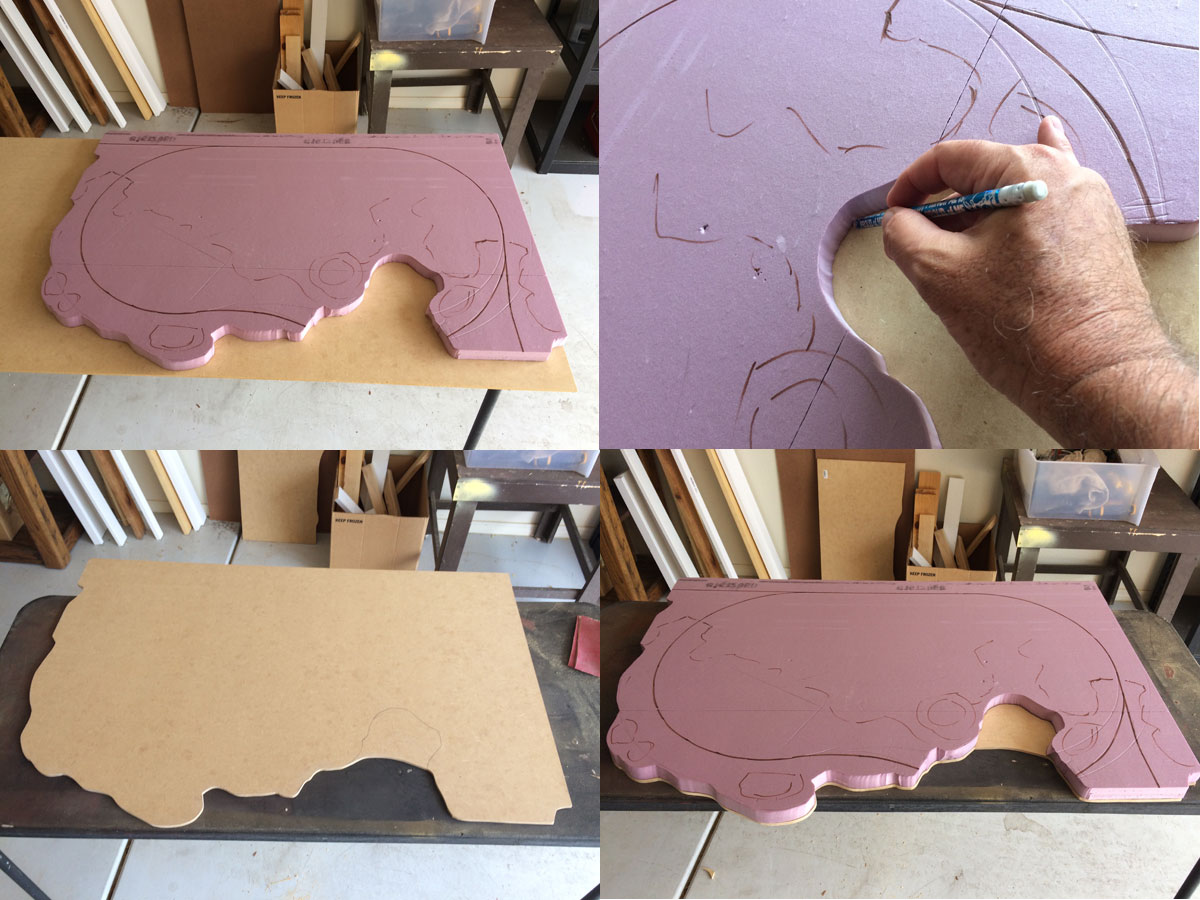 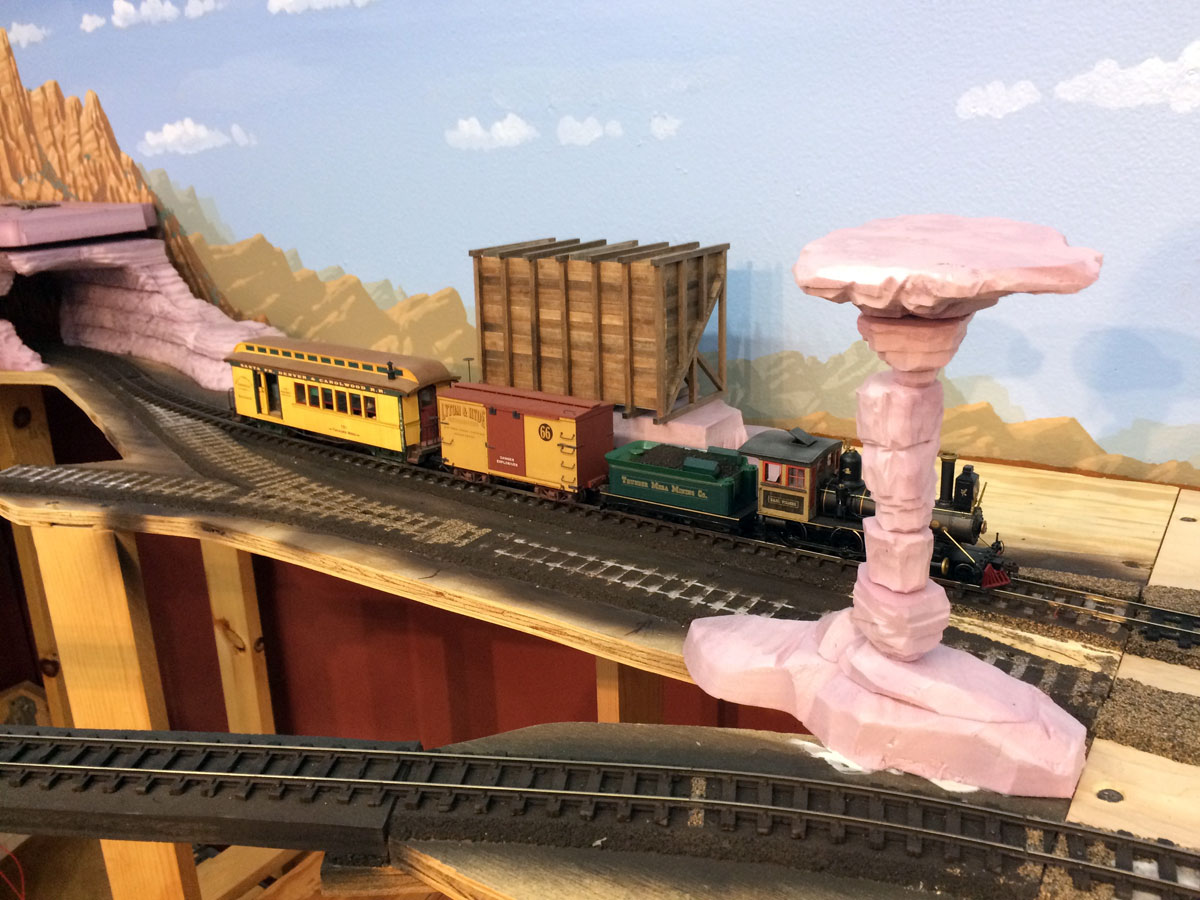 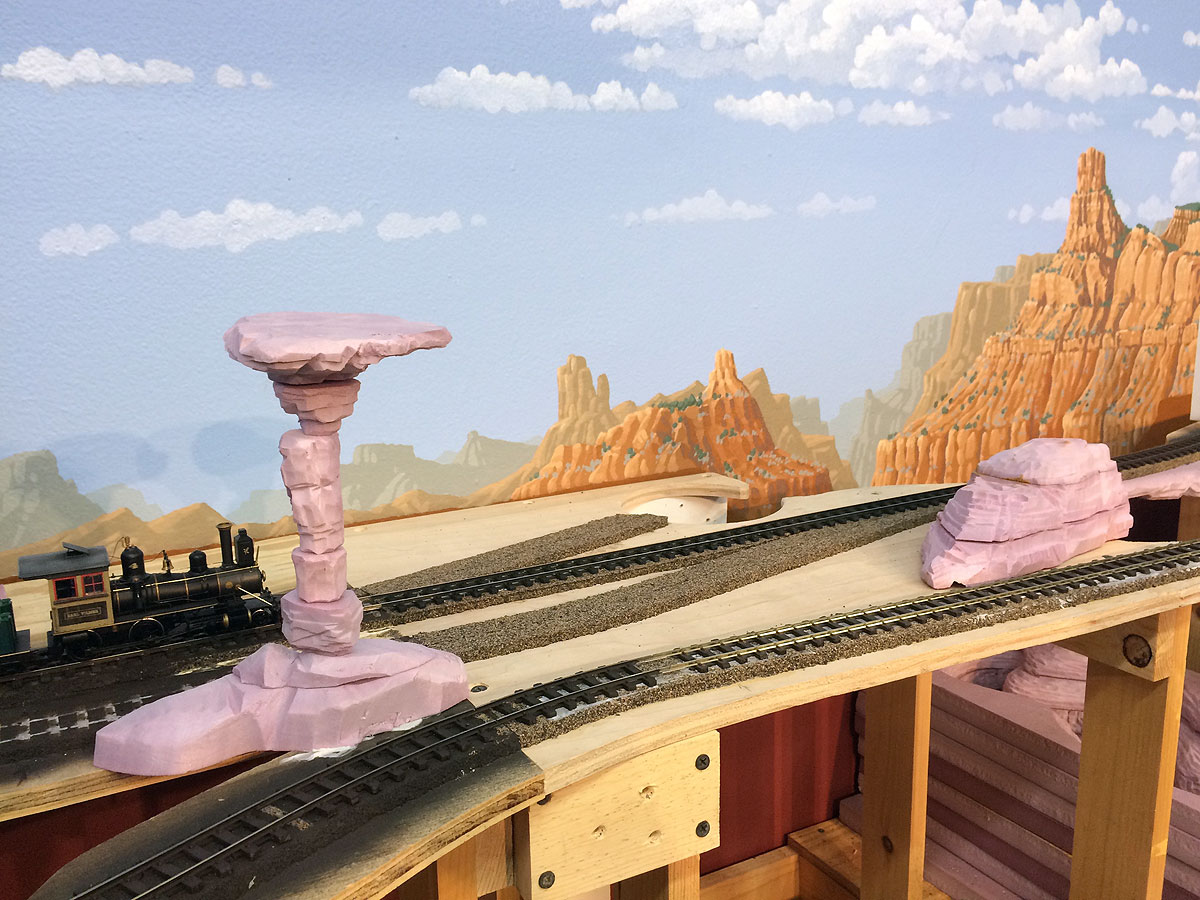 Plans for a portable On18 layout that docks with the larger TMMC have been on-again, off-again for the past couple years. I've always liked the idea, but couldn't quite figure out how to make it work in the space I had. Looking at things again with a fresh perspective, I realized I could move the town of Calico around the corner into the unused space where I'd been planning to expand the layout since moving it to the studio. This would then free up some room to extend the On18 line down from Big Thunder Camp and have it connect via a long trestle to a portable section depicting the top half of Calico Mountain.

The new mini-layout is smaller than what I had previously planned, just about 24x36", with a tight minimum radius of 9". For the uninitiated, On18 is 1:48 O scale trains running on 9mm gauge track - the same gauge as N scale. Tight curves are the norm, and I just love the chunky, top-heavy look is gives to the equipment. Perfect for a caricature of mining operations like Calico. The track plan is a simple loop with a switch or two to connect to the rest of Thunder Mesa's On18 track.

I started by cutting a piece of 1" thick extruded polystyrene foam, or EPF, to 24x36" and then drawing the basic track plan right on top. Then I placed the foam on top of the existing base I'd built for Calico Mountain and traced the contours before cutting the shape out with a hotwire tool. This gave me the beginnings of a portable module that could fit in the corner and form the top half of Calico Mountain. The next step was tracing the shape onto some 1/4" MDF board and cutting it out to match with a jigsaw. This baseboard was then braced with a simple box made of 1x2" stock to keep everything flat and level. Then the foam was lined-up and glued to the top to form the lightweight, portable benchwork.

The existing EPF base for Calico Mountain was notched and modified to accept the new module but additional bracing underneath will probably be required. The cavernous space created below will eventually be home to a detailed, underground mining scene based on the famous "Glory Hole" scene on Knott's Calico Mine Ride. In the former location of Calico Town, the track has been simplified and the short passing siding removed. This area will now be called Mojave Flats and a trestle from the On18 line will feed a large ore transfer bin here before connecting to the existing On18 track behind Hanging Rock. What was once East Calico will become the new home for Balancing Rock Canyon, a feature from Disneyland's old Mine Train Thru Nature's Wonderland that I have long wanted to model.

As for the town of Calico itself, it will still mostly consist of structures from Knott's Ghost Town. I still need to finalize plans for the new section of benchwork to be built to the left of Calico Mountain, but I hope to have enough space for a better representation of the town, along with a new passing siding, and possibly a reverse loop that ducks behind the backdrop to connect with a planned staging area above my modeling bench.

Meanwhile, Back at the River...

Work also continues on the roll-away Thunder Mesa Riverfront section where I'm still roughing in the riverbanks and cliff sides with EPF. My 50' paddlewheel steamer kit is on it's way from Kitwood Hill Models and I'm really looking forward to finishing the scenery on this module. 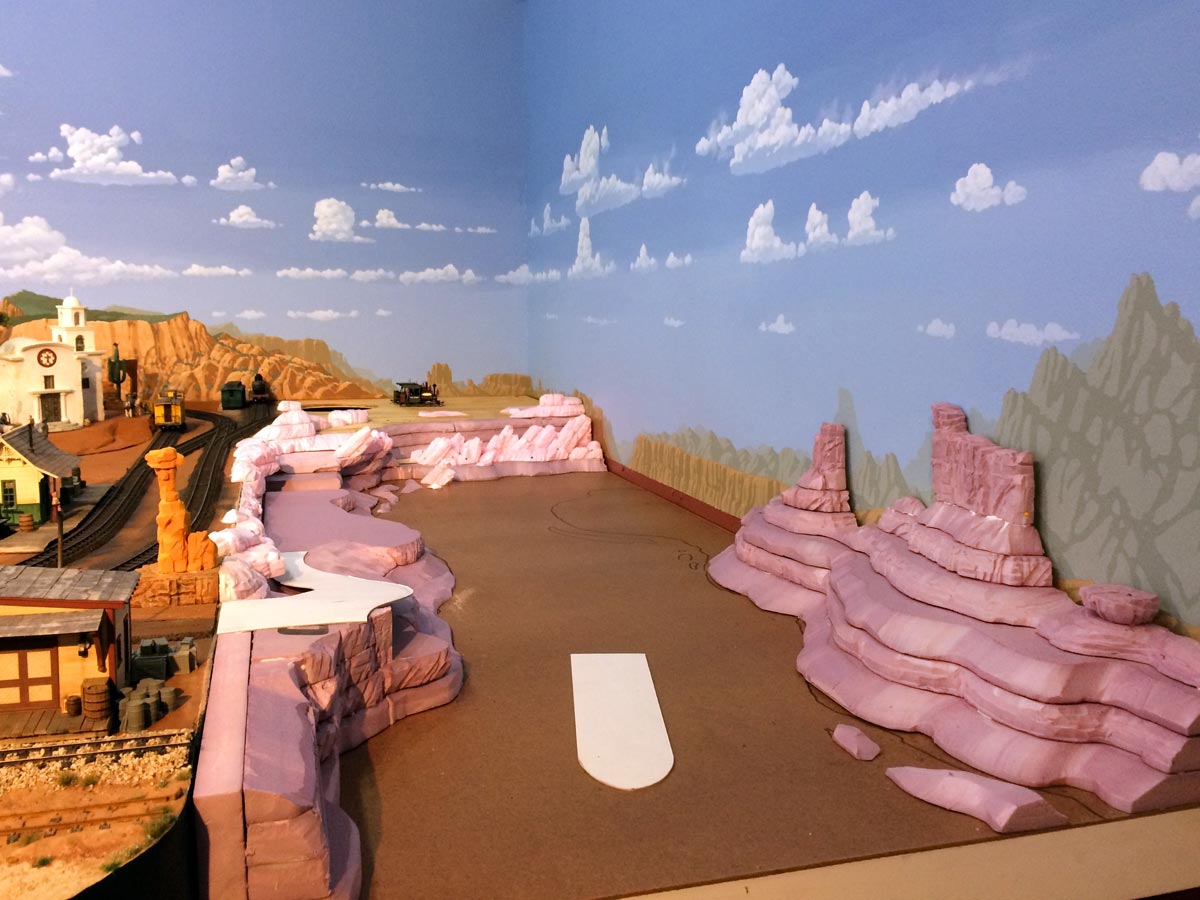 Hopefully I'll be able to make more time for work on the layout in the coming weeks. In the meantime, don't forget that the next Open Studio & Train Day is Saturday, August 5th. Come on over and say "howdy" if you're in Jerome and see what's new on the railroad for yourself.

That's going to do it for this update. Thanks for checking in, amigos. Adios for now!